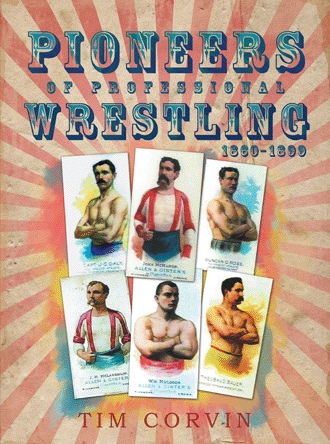 • Many of the early pros were Civil War soldiers who wrestled in camps; some were lumberjacks, miners, and railroad men

• They did not get paid by contracts or gate receipts, but by side betting

• Abraham Lincoln was one of the American frontier's fiercest grapplers

• In the 1860’s, Theobaud Bauer hid his identity as "The Masked Wrestler of Paris"

• William Muldoon and Clarence Whistler wrestled to a 7+ hour draw

to no effect, then whistle "Yankee Doodle” while hanging

• “The Terrible Turk” Was so violent he caused riots

• Read about these and many other fun facts!

• Over 30 wrestlers profiled with over 100 Pictures!

This historic collection explores the origins of mixed martial arts and professional wrestling in the United States and features profiles of more than 30 mat stars of the era, wrestling in art, over 100 antique photos and more.

There is perhaps no sport more primitive or more widely dispersed than wrestling. In its early days, many of the pros were Civil War soldiers who wrestled in camps, while others were lumberjacks, miners, and railroad men.

In Pioneers of Professional Wrestling, author Tim Corvin takes a look at how mixed martial arts and today’s professional wresting began. He provides insight into this competitive, hand-to-hand combat sport from 1860 through 1899 by

delving into the sport’s history;

discussing the evolution of professional wrestling;

describing the various wresting styles; and

offering biographies of the sports’ pioneers.

A reference guide on the origins of mixed martial arts and professional wrestling, This book contains detailed listings of all available match results, newspaper clippings, tobacco cards, lithographs, and many fun facts, such as:

Abraham Lincoln was one of the American frontier’s fiercest grapplers

William Muldoon and Clarence Whistler wrestled to a 7+ hour draw

Farmer Burns had such a strong neck that he could drop six feet on a hangman’s noose to no effect, then whistle “Yankee Doodle” while hanging

“The Terrible Turk” was so violent he caused riots

Tim Corvin earned a bachelor’s degree in wildlife sciences and a master’s degree in education. He works as a freelance environmental educator. As an athlete and entertainer, Corvin has performed in stage productions and has worked with professional wrestling promotions. He currently lives in Tennessee.