The History of Big Safari 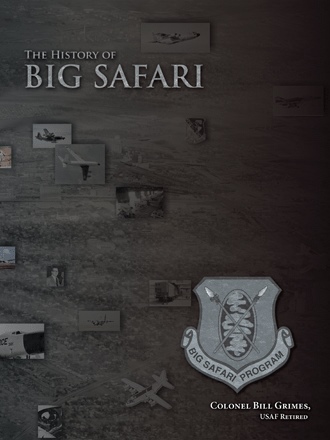 The very first BIG SAFARI program, PIE FACE -- a cross-decking effort to move a camera from one of the earliest YC-97A aircraft built by Boeing to a KC-97A -- was developed to satisfy intelligence needs identified by the Commander-in-Chief of USAF Europe (CINCUSAFE).

General Lauris Norstad, the CINCUSAFE, submitted a special request to Air Force Chief of Staff General Hoyt Vandenberg. The CINCUSAFE required an aircraft modified with special photographic capabilities for collecting intelligence on East German and Soviet military equipment and personnel movement in and along the Berlin Air Corridors.

“General Vandenberg convened discussions on this topic, the result of which was the establishment of a special program office under the Air Force’s Air Material Command (AMC).”7 The AMC office had authority to “oversee the creation of the platforms and systems, and contract out the work to civilian contractors.”8

The primary equipment was a lens designed by Dr. James Baker, while Dr. Duncan McDonald led a team engineering the camera system. Dr. Baker and Dr. McDonald were members of the Air Force Optical Research Center at Harvard University that moved to Boston University in 1949.9

With a 20-foot focal length (achieved by incorporating a pair of reflective mirrors), a large F-8 lens, and two large mirrors, PIE FACE carried the largest aerial camera ever built and installed on an airborne platform.

Jim Regis, WADC’s project officer, was involved with the 240-inch camera, nicknamed both BIG BERTHA and DAISY MAE, when it was installed on a RB-36 #85 at General Dynamic’s Convair Division in Fort Worth, Texas, from 6 January 1951 to 16 June 1951. (It was also known as the BIG ITEM, which was a term applied to all large airborne cameras.) Flight tests were conducted with the RB-36 as the camera’s platform. It was during the RB-36 tests flights that BIG BERTHA was alleged to have recorded the legendary “golf ball on a green” image, captured at an altitude of 45,000 feet.13 The camera’s massive dimensions required a hole cut in the top of the fuselage to lower the equipment into position. However, the BIG ITEM was removed following the decision that a bomber was the wrong aircraft to best serve the mission capability needs that the BIG ITEM would support, since overflight by a bomber would be highly provocative.

Boeing became the first PIE FACE modification contractor, as a result of Air Force Operations offering a YC-97 aircraft located at Boeing in Seattle.14 “AMC sent Walt Carmody to Boeing as the contracting officer to modify an existing contract to include the PIE FACE program. Not long thereafter, the project began faltering.”15

Boeing’s lack of attention to the PIE FACE project concerned F. E. O’Rear, the civilian head of BIG SAFARI. O’Rear visited the Boeing facility, where he discovered the aircraft security compromised. The PIE FACE aircraft was parked on the ramp in open view along the fence line of the road approaching the facility.

O’Rear said: “I took a cab ride from the hotel to the plant one day and was told by the cab driver that there was really something going on out there with that beat up old airplane. That did it. We had to move the project right away.”17

The PIE FACE project was moved to a secure hangar at the General Dynamics Convair Division in Fort Worth, Texas. The plant belonged to the Air Force and was known as AF Plant #4. Thus began a 20-year relationship in which 87 different aircraft were put through the program.

Vinko Dolson headed up the program for General Dynamics, and O’Rear was pleased with the program move.

Though there are no clear records surviving from those early days, speculation is that lower staff levels were somewhat dismissive of the CINCUSAFE request, assigning one of the least capable C-97 aircraft available. The YC-97A had low-powered engines and a lack of pressurization that left it unable to attain the desired altitude. The severe altitude limitations were revealed when the YC-97 was put through six weeks of operational evaluation. However, the BIG ITEM carried by the aircraft proved its worth.

PIE FACE moved to the more capable C/ KC-97A aircraft to compensate for the altitude limitations imposed by the YC-97. Tail number 49-2592 was chosen for PIE FACE modification.

From 19 December 1952 to 23 February 1953, both aircraft were at the Fort Worth facility. The modified C-97A installation in Fort Worth required a large cutout in the forward upper deck of the aircraft. Structural reinforcements supported the original loads of the modified fuselage, as well as the additional loads imposed by the BIG ITEM and its structure. The camera’s operations could be set for vertical or oblique (left or right) views through a large window behind covert doors. The camera and mount weighed 6,500 pounds.20

“The PIE FACE aircraft, crews, and support elements were assigned to Detachment 1, 7499th (later 7405th) Support Squadron, physically located at Rhein-Main Air Base, approximately 20 miles from Wiesbaden and the parent squadron.”27 The separation of the PIE FACE mission was a result of the inability of Wiesbaden’s runway to accommodate C-97A operations.

Though the initial agreement allowed unrestricted altitude for aircraft flying the corridors, the Soviets soon insisted on a 10,000 ft. ceiling, claiming aircraft flying above the ceiling could not be guaranteed safety. The breadth and location of the corridors covered approximately one-sixth of the Soviet-occupied Democratic Republic of Germany (GDR). If aircraft flew at higher altitudes, side-looking cameras could capture images of the entire GDR territory.29

Indeed, the PIE FACE aircraft flew a significant percentage of its missions along the border rather than into the corridors. The imposed 10,000-ft ceiling of the corridors prevented BIG BERTHA from achieving its full potential for far-reaching photography inside its target nation. Periphery missions along the border could routinely fly at 32,000 feet and engage the PIE FACE’s unblinking eye in a more optimal capacity.

“An early report on PIE FACE performance, from the Deputy Director for Collection and Dissemination, Director of Intelligence, for the period of 1 July 1953 through 31 December 1953, gives the idea of PIE FACE’s productivity. It states that 13 PIE FACE missions, involving 784 photographs, had been flown.”30

The outstanding intelligence gathered by PIE FACE during its early operational months in the European theater created such an interest that the single aircraft was unable to accommodate the numerous requests for reconnaissance support.

When the PIE FACE mission was at last scheduled for deactivation, the aircraft returned to General Dynamics for demodification. But, upon its arrival in Fort Worth, new purpose breathed life into the old bird when the Cuban Missile Crisis erupted. PIE FACE flew to MacDill AFB, Florida, and began operations against Cuba. The aircraft was involved in at least 17 high-altitude missions gathering high-resolution imagery of Cuba that supplemented PHOTINT by U-2s and other reconnaissance aircraft.

The PIE FACE aircraft arrived in Fort Worth in December 1962, following the Cuban Missile Crisis. In March 1965, the airframe was turned in for salvage, and the BIG BERTHA found its way to the Wright-Patterson Air Force Museum in Dayton, Ohio, where the historic camera is on display...

For more than half a century, Big Safari–modified aircraft have performed dangerous and essential missions to collect intelligence, conduct surveillance and reconnaissance, and engage in special operations missions around the globe in the interest of national security. These state-of-the-art aircraft have been flown, operated, and maintained by men and women whose dedication and commitment have made the world a safer place. In The History of Big Safari, author Colonel Bill Grimes, a retired US Air Force officer, presents a history of this program, which has been in existence for more than sixty years. Born as a special acquisition program in 1952, Big Safari has been in a unique position to save lives by rapidly fielding essential systems with a quick-reaction capability to ensure decision makers on the battlefield and at the Pentagon have timely intelligence to plan and execute operations. Grimes shows how, without a special acquisition program such as Big Safari, the nation’s ability to react to evolving dangers and threats would be mired in bureaucracy when timely responses are critical. With detailed cutaway illustrations revealing aircraft modifications and mission equipment, The History of Big Safari also includes photographs, sidebars, and anecdotes. It goes behind the scenes with the men and women who participated in the challenging projects and daring missions. It shares the development of cutting-edge technology and special mission aircraft, as well as the global events that necessitated these once-classified programs. Finally, it provides insight into long-veiled projects, operations, and missions that comprise the world under the purview of Big Safari.