Stop Competing and Start Creating the Life You Want to Live 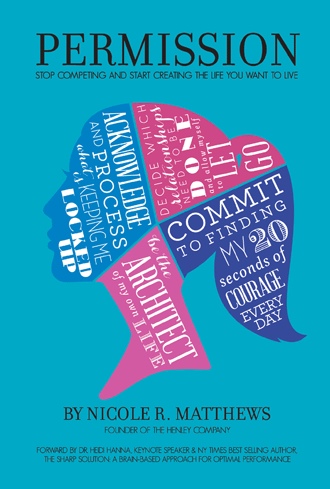 I guess I always thought that I would ease into adulthood; somehow the feeling would come as the birthdays ticked off and innocence transitioned into maturity. I certainly never thought maturity would all come in a moment. There have been milestones in my life that on the surface would equate to being a “grown-up,” but even in those experiences I somehow hung onto my youth and ability to separate myself from the “adults” in the room. This is not to say that I wasn’t a fully functional, card-carrying member of adulthood. I guess I had just not yet chosen to fully embrace everything it meant, especially with matters of the heart. Instead like Rod Stewart suggested, I just wanted to be “Forever Young.”

The Prince Is Not Always Charming

So imagine the impact I felt when on a Saturday night in April of 2008, I officially became a grown-up, and I started living into the cliché of “What doesn’t kill you, makes you stronger.” I was 34, and life as I knew it was soon going to be over. Dealing with the grown-up stuff didn’t evolve over time; instead, it presented itself in the flash of an eye, like the stories you hear of people crossing the road and not seeing the semi-truck that ran them over. Well, my truck −the one that got me− surely had all 18 wheels, and in every word I heard that changed my life, I felt the tires individually run over me.  I can push “play” in my head at any given moment to this day and completely relive what happened that night, where Jack and I both stood, what we were wearing (He had on red, plaid, flannel pajama bottoms and a white t-shirt, and I had on jeans and a black and white-striped fitted tee under a black cardigan) and what I was doing.

You see, I was standing in his kitchen; cutting mushrooms when he finally stopped pacing and started talking. I lifted my head to look him in the eye, when he nervously sat down in front of me on the other side of the kitchen counter. Then, I instantly got a rush of women’s intuition that told me nothing was ever going to be the same. Quietly he said, “Someone’s having a baby, and I’ve been told I could be the father.” As quickly as our eyes had met, I suddenly turned my head and looked down because I wanted to know if I was still cutting the mushrooms, or if it was truly my own heart that had just sliced open. A baby? It could be yours?  The questions started swirling in my head. This was the man I had convinced myself was the greatest love of my life; he was my soul mate. He was the one that fueled my passion for life, for my work, for making a difference. His friendship was what I had fought for with the cancer patient, and it ultimately cost me my relationship with a man who whole-heartedly loved me. He was the one…the only one… he was my best friend… he was my Prince Charming. He was also the one who told me point blank, looked me in the eye and said “No, there isn’t anyone else.” He was the one who told me he loved me, over and over and over again. And looking back now I guess that was enough for me, so I didn’t force him to ever commit the relationship into anything more than being “best friends” with benefits.  Maybe that was my fear of losing what I had with him. He was the one who − regardless of what life had thrown at us − we always clawed our way back to each other, and he promised me we always would.

I knew Jack was “the one” the night I first met him five years before. It was a moment that Hollywood directors try to recreate on the big screen. It was that moment where you come face to face with someone that you have never met before, and you know that your life will never be the same. That is what happened to us. Jack ran past me on the soccer field as I was warming up for our game. My co-ed team had fallen short of male players that night, and Jack asked if he could play. I looked up as I was tying my shoes, and I was stopped in my tracks. I’ve always thought that he resembles Matthew McConaughey with his piercing blue eyes and a cheeky look that could melt your clothes right off of you. He was athletic, brilliant, and an unbelievably good, fun-loving friend. He lived without rules and challenged the system; this had made him both financially successful and purposefully a loner at heart. His dysfunctional childhood was fascinating to me and completely opposite from the suburban bubble I grew up in. You either loved him or dismissed him when you first met him. He could be the biggest asshole you ever met and wore his “ass-holeness” as a badge. Being a functional alcoholic also served him well. On more than one occasion, he confessed to me that drinking was the escape mechanism he needed and the excuse he always had to draw upon. Yet despite all of that, I was in love the moment I saw him, and my life indeed never was the same. In just one night on the soccer field, he had worked his way into my head and heart. From that night, we started to not only play the game together on the field, but in life as well. He was unique, incredibly special, and he made me feel significant. I had finally met my match.

If Facebook needed a definition of the “It’s Complicated” relationship status, we could have been the poster children for it. Nothing about our friendship, relationship, or any other label you wanted to put on it made sense to anyone but him and me. We were both in relationships with other people when our planets collided, but we both knew that night that our meeting was the beginning of something significant that could never be defined by anyone but the two of us. Before this fateful night in his kitchen, Jack and I had been friends for almost five years. In the last two, we were officially unattached and not in relationships with other people, or so I thought. When I told him I was no longer in a relationship with Colin, that situation gave us room to be friends once again. That‘s when we picked up immediately where we had left off. While I was dating Colin, Jack had decided that it was too complicated for us to have a friendship. It was causing me too much angst because of Colin’s jealousy, and Jack didn’t want to be the cause of any trouble. At the time, I was heartbroken that he thought we shouldn’t be friends anymore but then I realized that it was a great gift of friendship. Out of love for me, he got out of the way. That’s how I would define love.

With a knife in my hand and a mound of mushrooms in front of me, suddenly I was in the kitchen with Jack sitting across from me. In an instant he was the one who forced me to step out of my bubble of innocence and into the reality of being a grown-up.

Forget “leaning in” or “leaning out” to get ahead both personally and professionally, in Permission! Stop Competing and Start Creating the Life You Want to Live, Nicole Matthews, founder of The Henley Company, champions the power of “leaning on” others to help create the life you want to live. This witty, humorous, and self-deprecating tale of a forty-something, who has had more fascinating life experiences than dates, will help you realize that giving yourself permission to live the life you want is the first step to finding your best future! Matthews is at the top of her game, but not without having to overcome challenges and mend emotionally, financially, and personally.

The personal journey of Nicole R. Matthews, a social media-loving member of generation x, who cherishes unique experiences, stamps in her passports, and trying to make sense of the opposite sex, is humorously chronicled in Permission! Through her stories, she shares the heartbreak she endured, a depression so profound she spent the night in the ER, and the challenge of having low self-esteem. But despite the setbacks she faced, she found the courage to give herself permission to get out of her broken relationships, start a successful business, and create the opportunities to honor her most precious authentic intentions.

Nicole R. Matthews, CSEP, is Founder and Lifestyle Architect of The Henley Company, LLC. which is a San Diego-based, global concierge firm, specializing in event, travel, and lifestyle management. She is an accomplished business owner, professor, speaker, and now, an author. Nicole lives in San Diego, CA.