by Keith A. Brueckner 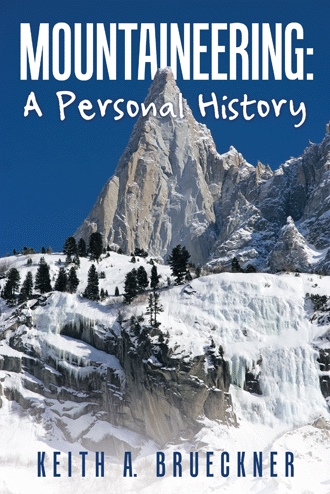 Memory of climbing is often dulled by the passage of time. The moments which endure in memory must have special qualities -- of beauty, supreme effort or fatigue, uncertainty, unusual apprehension and fear, long hours of hunger or thirst, cold, wind. and cloud, loneliness. I have often found the child within me recoiling with fear and apprehension at the sight of an immense wall of steep ice and snow, a fantastic arete of rock, a looming overhang, the descending grey of storm high on a face -- in short, at the sight of the superhuman, the unknown, the elements beyond one’s control. My reaction has always been to look, breathe deeply, collect my experience, then move ahead with caution. This reaction is accompanied by deep, powerful sensations of excitement, exhilaration, and of love for beauty, for the exercise of strength and endurance, for the momentary possibility of becoming one with the gods. The child stares in terror and admiration -- and opts to join his heroes. What moments for the infant within one! What moments for the man to test his ability, strength, and nerve!

This book records my climbs and experiences in the mountains, which began sixty four years ago. The climbs I describe are not those of a virtuoso climber but of a mountaineer who passed through many stages of experience and competence. They should be of interest to the mountaineer in the United States, to the beginning climber, and to the rock and snow expert who is ambitious to climb the great peaks of the French Alps. I believe that my observations on technique, training, misadventures, and mistakes should be illuminating to all climbers and particularly to the amateur. I have tried to be candid about my errors and limitations, so that others may learn. As the following accounts will show, one can maintain strength, endurance, and agility, and even surpass one’s early achievements by proper training and practice well into middle age and beyond.

The accounts of nearly all of the climbs, starting in 1963 when I started to keep detailed writings and records, were written at most a few days after the climbs. I have utilized the best-known words or phrases -- usually French but more or less incorporated into the English language -- to describe the technical aspects of mountain climbing, the equipment, the terrain itself, the names of peaks, ridges, chimneys. In addition, I have used ratings from either the French or American tradition to classify a climb, or part of a climb, according to difficulty. The rating sytems are given in the Appendix.

High atop a mountain, Keith Brueckner grappled with fear at the sight of an immense wall of steep ice and snow, a looming overhang, and the descending grey of storm high on a face. Time after time as he bravely faced the unknown and elements beyond his control, Brueckner opted to bury his fears, test his abilities and inner-strength, and join his mountaineering heroes in creating unforgettable adventures.

In a narrative released posthumously, Brueckner details over fifty years of climbs in the mountains beginning in 1938 in Switzerland when he first ascended a steep dusty trail up the Rigi and discovered his love for thin air, spectacular views, and physical challenges. In his entertaining anecdotes, Brueckner leads others through his mountaineering adventures that took him from the Matterhorn to Mt. Blanc to the Sierra Madra, Half Dome, Mt. Woodson, and the Tetons. Brueckner not only shares a glimpse into a day in the life of an avid climber, but also describes the technical aspects of mountain climbing, the equipment, and the sometimes unforgivable terrain. Included are his personal ratings that classify climbs according to difficulty.

Mountaineering: A Personal History is a nostalgic compilation of stories that chronicle one man’s adventures as he scaled peaks in Europe and the United States and nurtured his passion to become one with the gods.

Keith A. Brueckner earned a PhD in Physics from University of Minnesota in 1950 and began working at the University of California, San Diego in 1959. He hired scientists in solid state physics, plasma physics, and astrophysics that included two Nobel Prize recipients. Dr. Brueckner climbed for over fifty years in Europe and America. He died in 2014 at the age of ninety.