A Woman with a Mind of her Own

The Delicious Adventures of Maggie, Who Lived by Her Own Rules as Daughter, Wife, Mother, Businesswoman, Professor, Author, Public Speaker…and True Feminist 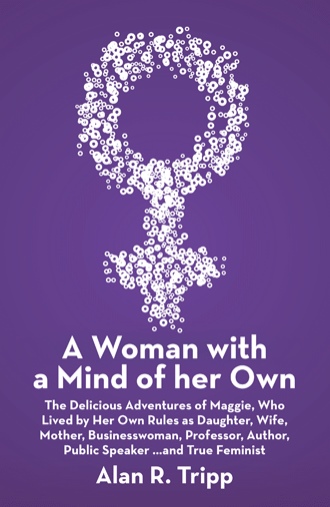 Truth be told, Maggie was not her legal name.

In fact, it wasn't even a name of her own choosing.

Over the years "Maggie" had many names, most of which she herself adopted, names that seem to fit the occasion, her then-current preoccupation or simply a device to start a new phase of living.

As a consequence of this cognomen rotation, Maggie appears in various vignettes in this book under a variety of identifications - and, in fairness to you, dear readers, here are a few clues as to the names under which she flew through her adventures.

On her birth certificate, her name was Madeline -- yes, spelled that way and not "Madeleine," as the French would have it.   She owed that to her mother who insisted that the simpler spelling was not only correct but would save endless explanations to non-French- speaking Americans.

When she was old enough to write her name, our girl decided on a different spelling, one that would distinguish her from all other Madeleines. She chose "Madelyn."   Today, of course, twisting and mangling the spelling of any name is practically mandatory; back in 1930, it simply foreshadowed other rebellions to come.

About that time, however, Maggie's parents -- great movie fans because her father sold candy in theaters -- became enamored of the name "Madge," a given name shared by movie stars such as Madge Evans and Madge Bellamy.   Her parents hung it on their younger daughter, and it remained the name she responded to until the early years of our marriage.

But "Madge" does not have the ring of young love.  Try saying it out loud a few times.  So when our children began to mouth words, it came out as "Match."   Unmatchable, maybe, but not "Match."   One day I blurted out "Madge Muffin," which clung for a while until Maggie began messing around with my name and Alan became Alley Cat and that became "Alley Cott," obviously requiring her to become "Magic Cott" - which morphed into "Magicott" or simply "M. Cott."  These and other variations flowed freely through our house but none hung in to become a permanent nickname.

In my more romantic moments, I would call her "Me-Own" or "Lamb Chop" or "Puss Lamb."  Sadly, those affectionate appellations never caught on with the kids or with her friends.  In retrospect, I can see why.

When granddaughter Abby came along, she did what only adorable children, age two, can do: she garbled "Grammy" into "Ummy" - and it stuck with both family and friends.  One of our good friends, upon hearing "Ummy" for the first time, asked Maggie what corresponding name had been awarded to me; she promptly made up "Pulty."   That was an instant winner.  Abby adopted it as though it had originated on her lips.

Which brings us to "Maggie."   In the 1960's, as you will learn elsewhere in this book, Maggie owned an art gallery in Philadelphia, a gallery devoted to exhibiting the work of young, upcoming local artists.  Many of these aspiring Warhols, appreciative of the opportunity to be seen in the highly competitive world of contemporary art, became her acolytes.

One day, when munching sandwiches in the gallery, there was sudden silence.  One of the artists cleared his throat and said, "You know, we really love having our work in your gallery, but -"

"But what?" she quickly responded.

"Well, we were talking about your name…Madge…it's kind of stuffy, you know, old fashioned…you know, it’s kind harsh for a modern gallery owner."

"So call me Maggie."

From that moment on, they did.  And soon the rest of her world did, too.

Maggie's mother, who, at age 85, was at least as outspoken as her daughter, laid her thoughts out for Maggie one day in 1978, essentially like this: "I know you're involved in all that women's movement stuff.  But I just can't understand what you could have to say that people would pay you five thousand dollars to hear you talk for an hour."

No slouch at addressing matters directly, Maggie replied: "The next time I have an engagement, you can go with me and then you can tell me exactly what you think."

Soon thereafter, Maggie, then living in her elegant apartment at the United Nations Plaza in New York, called her mother in Philadelphia and invited her to come to Pittsburgh where Maggie would be addressing the Pennsylvania Federation of Women’s Clubs.  Helen took a plane from Philadelphia while Maggie flew to Pittsburgh from New York, meeting her mother at the airport and going directly to their room at the Pittsburgh Hilton.

Not one to sit idly by, Maggie's mother immediately demanded that they go to meet the women attending the meeting.  Maggie remembered that I had always cautioned her not to dilute the message by mingling with the crowd before the speech.  Afterwards, yes, mingle and mix in.  Before the speech, never.

Instead, Maggie convinced her mother to go down to the auditorium where she would be speaking… to scout the room, test the microphone, make sure that she would be heard in the farthest corner. It was a very large auditorium, indeed, so Maggie parked her mom in the back of the room.  She turned on a few stage lights and addressed her one-person audience from the podium.

The title of the speech was, "Oh, Those Revolutionary Women!"  It was a tale of those heroic women -- like Mary McCauley (“Molly Pitcher”) and Abigail Adams -- who found their own pathway to greatness from the time of the American Revolution until that very day.  After Maggie delivered the first few paragraphs of the speech with gusto, she paused and shouted to her mother, "Well, what do you think?"

From the dark reaches of the auditorium, a voice floated back, "I wish you were two inches taller!"

Alan R Tripp married three times: First when he eloped, a second time in a double ceremony with the bride’s sister, and a third time when he renewed his vows.

Each time it was to the same woman: Maggie.

While their friends wondered how they could stay married so long when they were so different, that’s precisely what made it work. In this unconventional biography, Alan pays tribute to his wife’s take-charge attitude and essence with a series of vignettes that will make you think, laugh, and shake your head in wonder.

How Maggie combined marriage, business, teaching and public speaking with strong feminism will inspire you to “go for it” in life…and never to settle for less than what you know you can be.

Alan R. Tripp was Maggie’s husband for seventy-three years. He’s written three books and dozens of songs, reviews and advertisements. He’s been a broadcaster and television producer. Once, when asked how he and Maggie stayed married so long, he answered, “Neither of us died.”