The 14 Virtues of the Good Father

Navigational Tools for the Father Inside of Every Man 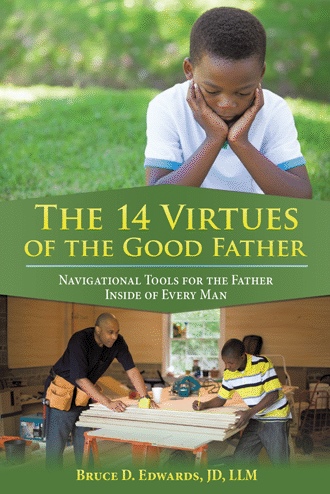 “A father’s involvement and time investment is analogous to the reproduction of moments a father spends teaching his child how to ride a bicycle. The father sets the pace by encouraging his child, building his or her self-awareness/assuredness. The father then teaches his child, often through illustration, the precise mechanics necessary to operate a bicycle. The father would also go over all the safety measures and precautions in an effort to keep his child not only informed but also protected. Once the child builds up the determined resolve to try to ride, the father is there every step of the way by offering a guiding hand and loving instruction. Lastly, once the child has mastered the art of balance, focus, and coordination, the father is then able to safely let go. Such is the case with life in general. I have often maintained that the best helping hand is given by the one that generously gives but who also has the confidence to understand the importance of when to let go. Dedicated true fathers realize that the gift of fatherhood is defined by the giving of one’s time. A father’s time is not only precious but also irreplaceable. It should always be spent wisely and with the best intentions.

As fathers, we must never take our time with our children or God’s grace for granted. We must do so by living in the “now” and never staring in our rearview mirror. For we can never recover what we have lost, and tomorrow will always be a mystery, as it is not promised to any of us. God’s Word reiterates, “Don’t even worry about tomorrow; after all, tomorrow will worry about itself. Each day has enough trouble of its own” (Matt. 6:34 GWT).

So what will be said about you? Will you be patient despite repetitive instruction to your child? Will you be cavalier in protecting your children, even though they are consistently bombarded with societal distractions? Have you fathomed that lost time can neither be rewound nor restarted? Fathers should always proactively ponder and consider these questions if they are serious about their active participation as involved fathers. An involved father is always conscious about his actions. Real men stay mentally prepared. As spiritual minister Joyce Meyer puts it, “Where the mind goes, the man follows.” Hence, mental toughness is key. We must embrace our challenge never flee from it. Our loved ones and the community are depending upon us. We must regain our rightful place as intended.

For we, as fathers, offer a perspective that is spiritually integral to our child’s development. As God has instructed us to perform, we must neither neglect nor delegate our duty. For it is written, “These commandments that I give you today are to be on your hearts. Impress them on your children. Talk about them when you sit at home and when you walk along the road, when you lie down and when you get up” (Deuteronomy 6:6-7 NIV). As one can easily discern, a father’s input is divine; it should be cherished as sacred and viewed with the upmost significance for a child’s growth. No matter your child’s age, the role of a father is never achieved or accomplished. A father’s role is continuous; it’s selfless and always loving and giving. A father’s role may evolve but will never and can never be exhausted.

As your children age, your conversations with them must change as well. Your children are now more mature but yet unprepared to face real life situations. As newly proclaimed young adults, your children’s desires will become more prevalent. Unfortunately, looming distractions will also prove to be more tempting, despite the dreadful consequences that follow. So now your role as father is more necessary than ever before. However, one’s fatherly instincts must evolve and transition to one of guidance counselor, wise mentor, and/or elder confidant. If the father has laid the proper foundation throughout his child’s upbringing, then he should be confident in his child’s maturation into adulthood, as he can now witness his past teachings being exemplified through his child’s behavior and decision-making.

o there are ninety-eight million men in America;

o sixty-three million men say they have no faith in Christ;

o only 50 percent of kids will spend their childhood in an intact family;

o more than twenty-four million kids live apart from their biological fathers (one-third of all kids);

o 39 percent of male prison inmates had no father at home; and

o 50 percent of female inmates had no father at home.

These statistics illustrate the purposeful significance of a father’s presence in the home and the costly residuals of his absence. Books and other studies have also further corroborated the effects of a father’s void and the benefits of his nurturing. In the book, Promises Kept: Raising Black Boys to Succeed in School and in Life, authors Joe Brewster and Michelle Stephenson noted, “Boys whose fathers are highly involved in their lives --meaning that they consistently eat with them, play with them, work on projects together, read to them, help with homework, go to their activities, have private conversations, and go on outings with them--do better in life than boys whose fathers are not involved. The same is true during adolescence…..Having an active dad predicts whether a boy will get mostly A’s in school more accurately than an amazing mom.””

Recent studies conducted by the National Center for Fathering and National Fatherhood Initiative show that only fifty percent of children spend their childhood in an intact family, and about one-third of all children live apart from their biological fathers.

As a father, your involvement is much greater than your mere presence. Fathers must ensure that their deeds exemplify their words in that the father exhibits the behavior he instills in his children.

Bruce D. Edwards, JD, LLM, has mentored hundreds of young children, and he’s witnessed what it means when they have a father figure in their lives. In his book, Bruce shares impactful qualities to becoming a better father and role model. Learn how to:

•develop the necessary spiritual awareness to lead and guide children;

•invest the necessary time and effort to be a great father figure;

•show affection and love to boost a child’s self-esteem; and

•comprehend what it means to spend quality time with children.

Whether you’re a parent, grandparent, guardian, teacher, mentor, or an adult who wants to make a difference by cultivating lasting connections with children, The 14 Virtues of the Good Father is a great resource guide to assist in developing and nurturing fatherly relationships.