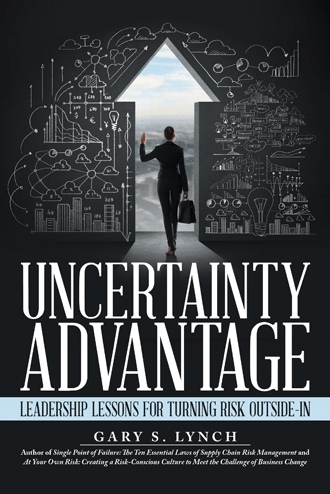 However, the uncertainty advantage mindset focuses on whether a greater understanding of the unknown can be leveraged as a market differentiator, not just for immediate financial improvement. You may recall the benefits described in Chapter 1 (the opportunity for growth or new revenue, competitive advantage or more précised decision making, improved performance or lower cost, and measureable improvement in risk reduction). By focusing on uncertainty and understanding the change and strategic decision making cycle, the opportunity is well defined and realistic. So this becomes a different question: Has the Manager enabled the Growth Leader growth by providing greater insight, deeper competencies, intelligence and additional capabilities to allow more accurate forecasting and decision making? Would Market, Leader and Manager points of views be reconciled? Would investors, customers, competitors, and regulators witness a clear value differentiation as a result of this uncertainty and Market driven mindset?

An example of how an organization created market advantage is the case of Hyundai Motors. In 2008 and 2009, the recession in the U.S. deeply affected auto sales. As John Krafcik, CEO of Hyundai Motors America (HMA) explained in a 2015 interview for this book, “It was time of chaos. But we had the right leadership team on the ground in the U.S. We were able to take advantage of uncertainty.” They also had laser-like focus and decided to initiate change. The situation was clear, the question well understood: How do we leverage enormous market uncertainty into a positive buying force? The markers indicated that this would be a material and speculative change and that the time was right to pursue uncertainty as a positive force, and as a market differentiator.

The “right leadership team” has to consist, at the very least, of a strong Growth Leader able to act decisively on good information/intelligence and in recognition of market advantage to be gained; strong support from the team itself without resistance to new ideas, and of course, a value enabler who is able to bring good ideas to the decision maker. So rather than looking at the recession as a problem, Krafcik said that recession “enabled us to lean into market anxiety.”

Even beyond this, the Growth Leader and team needed a requisite mindset, an awareness of the Uncertainty Advantage and how to recognize it. They needed to understand how their competitors and other stakeholders were interpreting the same facts to reach different conclusions. The Growth Leader and his team had to imagine, during a recession affecting auto sales, how the opportunity presented itself when the buying public was unsure of its own future. Yes, this was a problem; but it was also an opportunity. What could Krafcik’s team do to improve the belief in their hypothesis that the market wanted to buy new cars but they were too afraid to enter into a loan agreement that offered no way out? The over-capacity and over-leveraging in the used car market was a reality that most buyers had been exposed to via the earlier home lending crisis. How could this fear be turned into confidence? That was the challenge of the moment.

In 2008, people were not buying cars and the reason was well understood by Hyundai. “Dramatic drop-off in car sales was due a general sense in the public that people were losing their jobs everywhere. We recognized that people weren’t buying cars out of fear of losing their jobs,” Krafcik explained. Hyundai discovered that it was possible to navigate this situation to create market advantage. The key was to identify what would convince the buying public that, in spite of the economic trouble of the times, there were sound reasons to buy new cars – through a creative system allowing buyers to return their cars if they lost their jobs later. How was this accomplished? Creatively! Being the smaller player had its distinct advantage. The smaller player typically has greater urgency and much more open field to navigate.

At that time, an insurance company (EFG) had gone to the Big Three auto manufacturers with an idea to solve this problem, but all three companies rejected it. The timing was right once the company came to Hyundai. Their idea led to development of the Hyundai Assurance Program. Customers were able to take their new cars back to the dealer and give them up if they lost their job, with no negative outcome on their credit score. Krafcik touched on the core issue: “We saw this as an opportunity.”

Why did Hyundai recognize the value of this program when the other auto companies had not? The differentiator was that Hyundai’s management team had a Growth Leader, market driven mindset and performed its internal analysis to better understand uncertainty among customers and competitors. Hyundai had greater confidence than their competitors, which translated into market advantage. Hyundai performed an analysis of demand side risk, which was undertaken as part of their market and strategic analysis. They also understood that their competitors might be complacent or confused or their bureaucratic structures would not support quick action. Operations and financial risk management only considers supply side risk, in other words risk exposure of the organization and the priority of value preservation. The Growth Leader tackles demand side risk, meaning developing an appreciation of Market concerns; the customer, investor, regulator, and partner. Why were car sales falling? and what could Hyundai do to change this?

Once Hyundai made arrangements with the insurer, things moved fast. In 37 days of their first meeting, Hyundai had an ad running during the NFL championship game. Krafcik: “It rocked the world.” In other words, by displaying confidence to the buying public, Hyundai demonstrated that it understood the demand issues, even in uncertain times.

The great lesson is clear: Companies that take the time to deeply understand the origins of uncertainty and reconcile mindsets (Market, Leaders and Managers) can better address it. Listen for it, sense it, pounce on it when it arises. The individual value enabler acts as an intermediary and provides the capabilities and competencies in such cases, taking solutions to support change and the Growth Leader’s decisions. That Growth Leader is then able improve critical decision making. This can all take place, based on the Hyundai example, in about 37 days. And that value enabler can come from anywhere in the ranks of the organization. So as much as any other attributes, a Growth Leader should seek out value enablers and to be prepared to take action. The value enablers should adopt the Market driven mindset as well; embracing a great sense of urgency in providing the capabilities and competencies for the situation and business decisions. The solution in Hyundai’s case was focused not on operational or financial risks, but on what helped the key stakeholders (in this case, customers). It also enhanced prospects for other stakeholders, including investors and regulators. Rather than relying on government bailouts like the Big Three did during this time, Hyundai arrived at an effective Market solution aimed at helping customers feel safe about buying cars.

Risk and uncertainty may sound scary, but today’s best business leaders are navigating both to gain strategic advantage over competitors—and you can, too.
This guide for business leaders examines risk and opportunity through the lens of some of the world’s most respected visionaries, including Howard Schultz, Andy Grove, Peter Huntsman, John Krafcik, Peter Leibinger, Doug Hepper, and many more.
These visionaries looked beyond financial performance to see opportunities—and they did so by understanding uncertainty. Then, they decisively acted to create measurable results that coincided with the future they envisioned.
Find out how they did it, and learn how to:
identify, define, and convert uncertainty into value;
become more opportunistic when facing uncertainty;
develop the skill to spot where advantages are likely to emerge; and
create an environment where managers and leaders complement each other.
Filled with case studies on companies such as Hyundai, Starbucks, Roche, and Intel, this guide delivers proven ways to create value and leverage uncertainty. It is the culmination of a decade of research and interaction with dozens of companies and growth leaders who prove that pursuing a market driven strategy to navigating uncertainty will gain measurable market advantage.

Gary S. Lynch is the founder and CEO of The Risk Project LLC, an advisory, intelligence and research firm.   Gary has worked with global manufacturing, financial services, life sciences, chemical, and technology companies around the world.  He held strategy and intelligence positions at Booz Allen Hamilton, Gartner Group, JPMorgan Chase, Prudential, and Marsh.  He has also held advisory positions with the World Economic Forum’s Global Risk Network, U.S. Department of Commerce’s Advisory Committee on Supply Chain Competitiveness, and currently serves as a Senior Research Fellow at the R.H. Smith School of Business, University of Maryland.