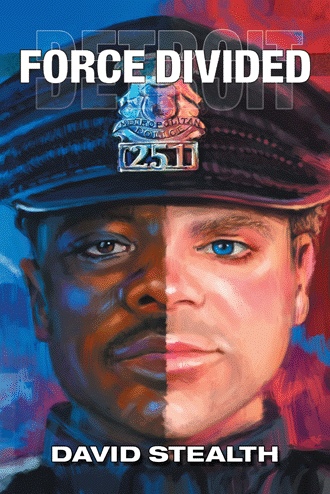 This book is dedicated to the men and women of the Detroit Police Department who have given the ultimate sacrifice, as well as those who have severed and continue to serve proudly with integrity, while wearing the badge of honor.

These proud men & women are from various backgrounds and cultures, all of whom took an oath to protect and serve, while upholding blind justice for every resident of this city.

Unfortunately, many citizens of Detroit stood unaware that they were being protected by two separate factions within their police department. There’s a White faction and Black faction, which often operates in unity, but occasionally performs intentionally separate. Yes, the ugly force of racism is alive and well in the Detroit Police Department, and it exists on both sides!

This is one man’s view of a-City being served by a Force Divided, counterpoised with the dreams of another who desired for men to be judged by the content of their character not the color of their skin, a dream that sadly in many cases has yet to be fulfilled.

Author David Stealth's journey began more than forty years ago on the day he was sworn in as a Detroit, Michigan, law enforcement officer, a dream he had held since childhood. Stealth was proud to become one of "Detroit’s finest."

In Force Divided, he shares stories of what life was like on the streets of Detroit as a police officer. In this memoir, he pays particular attention to the racial divide between white and black officers that occurred throughout his many years of service. Stealth offers a firsthand look at the segregation, bias, hate, and racism that existed within the department.

Filled with action from the streets and descriptions of real-life experiences and drama, Force Divided narrates Stealth’s work as a police officer for more than four decades—a moral journey indelibly marked by the inequities of racism within the law enforcement system.

The Author, a retired Detroit Police Officer, worked the streets of Detroit for his entire career in various capacities. These assignments included uniform patrol, felony plainclothes car, as well as 16 years as an undercover narcotics officer.

During his tenure in Narcotics, Dave worked many high profile cases while serving with a number of federal task forces, including the Drug Enforcement Administration (DEA), Federal Bureau of Investigation (FBI), and Alcohol Tobacco and Firearms (ATF).

As an undercover officer, the author has a very unique perspective of the law as well as lawbreakers. His unusual ability to blend in with the criminal element allowed him to infiltrate and descend to depths that most criminals never reach, much less law enforcement officers. He believes you must understand and think as your enemy before you can pursue them.

In addition to his law enforcement career, Dave is a United States Army veteran, who served on the Korean DMZ with the 2nd Infantry Division as well as a tour with the 101st Airborne Division in Iraq as a Law Enforcement Professional (LEP) during the “Surge” of 2007–2008.