Nothing Good Happens at … The Baby Hospital 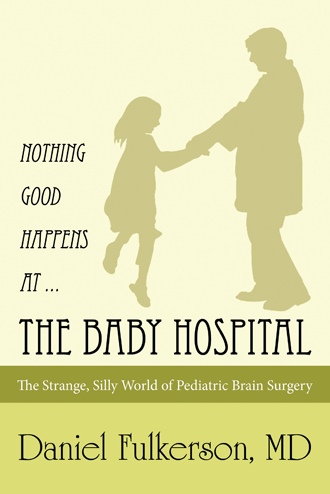 When Daniel Fulkerson entered medical school, he pictured neurosurgery as a serious business that demanded precision, a harsh attitude, and a complete absence of fun. But after falling backwards into the specialty, Dr. Fulkerson found neurosurgery to be a field filled with joy, sadness, a little humor, and courageous and inspiring patients.

In an honest and compelling retelling of his long and winding road to train and then practice as a pediatric neurosurgeon, Dr. Fulkerson guides others through his journey from medical school to service on a small military base, through residency training, and finally, to a practice in a highly specialized children’s hospital. The journey reveals the dramatic swings of emotions experienced by both patients and doctors in an increasingly hostile medical environment. Dr. Fulkerson also shares stories of dedicated professors who train medical students and resident surgeons to care for the tiniest neurosurgical patients.

Nothing Good Happens at … The Baby Hospital offers a compelling glimpse into the joys, tragedies, and hopeful moments that surround the highly specialized and sometimes silly world of pediatric neurosurgery.

Daniel Fulkerson, MD is an associate professor of neurological surgery at the Indiana University School of Medicine, and the assistant residency program director in the university’s Department of Neurological Surgery. He earned two undergraduate degrees at the University of Notre Dame, graduated from medical school at Indiana University, and served in the United States Air Force. Dr. Fulkerson has won three teaching awards and is a member of Alpha Omega Alpha.