To the Fire of Normandy and Beyond

by Frank Kozol & With Neil Kozol 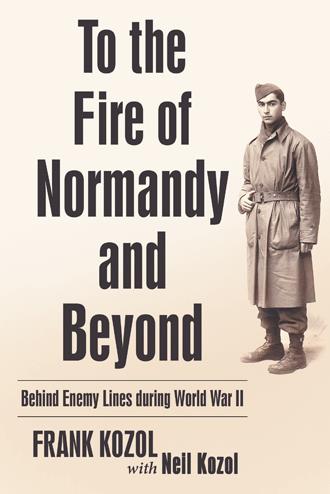 “If anyone asks for us, just tell them we are down at Battalion headquarters still, enjoying the Belgian farmer’s hospitality,” Paul urged.

Kurt and Paul stopped at the Quartermaster’s farmhouse to try to get a saw.

“You crazy guys want a saw?” the Quartermaster sergeant asked. “Maybe you can be luckier with a hatchet I lifted back in Sedan,” he suggested.

Kurt took the hatchet and said,

“Now I feel just like George Washington when he went after his famous cherry tree.”

After swearing the Sergeant to secrecy, the furtive duo made it out of the building and in a short time were in the deep woods of the Ardennes. It was starting to get dark and they didn’t dare use their flashlights. Fortunately, they found a tree that looked promising, although it was a little larger than what they had in mind. They started to work taking turns trying to chop it down. The wood was moist and stubborn and took them a long time. Finally the tree came down with a resounding crash, and just at that moment, Paul and Kurt found themselves surrounded by a dozen civilians all carrying weapons pointed straight at them.

“Est ce que vous est Francais ou Americain?” (Are you French or American) one of the men asked cautiously.

One of the civilians poked his gun in Kurt’s belly and asked beligerently, adding“ Pourquoi que vous parlez francais avec un accent fort qui est boche?”(Then why are you speaking French with a heavy German accent?”

The group who were apparently Belgian resistance people started arguing vehemently amongst themselves. A young woman stepped forward. She seemed to be a leader of this group and was arguing with a man who had his gun poked firmly in Kurt’s stomach., argued for shooting the two of them right then and there.

She spread her hands out protectively in front of Paul and Kurt and said in perfect English,

“Sure and so do all the s.s. who are running around here too.”

A man snarled in broken English,

”It will just be as easy to kill you two nazi murderers right now. By the way, what are you doing with that tree?”

“We wanted to bring a Christmas tree back to our outfit,” Paul answered trying to be convincing.

“Seuelement les homes fou ici oeut etre Americains,” (Only the crazy men here could be Americans), the woman responded to the group. She then turned to Paul and asked,

“Who is Shirley Temple?”

”She is a beautiful talented child movie star and I have always been in love with her. My mother would give me cereal in a bowl with her picture on the bottom of it and tell me to make all gone and I would see the picture of my beloved Shirley temple.”

Frank Kozol “Paul Kramer”, who served in the U.S. Army during WWII is the eyes and ears for the reader on what it was like to leave home and go off to War.
While he’s changed the names of the people he served with, everything he writes about is true.
As he takes the reader on his journey to serve his country from leaving his family and neighborhood for Registration to returning as an honorably discharged WWII veteran, the author describes his day to day adventures which lead to unexpected service for the US Army behind enemy lines, embedded with the French Resistance.
He describes his friendships, his day to day activities as an army medic and working with the French Resistance, during the war.
Kozol must draw upon his patriotism, loyalty, character, and apply the values he was taught as a child to the challenging circumstances of war in order to survive.
This book conveys a captivating true story, by one of the many heroic soldiers protecting our country during WWII from a perspective that has rarely been seen or told. This is the adventure of one man’s war-time journey to The Fire of Normandy and Beyond.

Frank Kozol engages the reader with his war experiences from beginning to end including his becoming an army medic to the unexpected and secret assignments, which included serving as an embedded liaison for the U.S. Army with the French Resistance during World War II. Because his activities were classified, his colleagues never knew how he spent his years during the war when he was on assignment for both the CIC: Counter Intelligence Corps and CID: Criminal Investigation Division.

He went on to become a revered Professor of Optometry at the Massachusetts College of Optometry and developed a successful private practice.