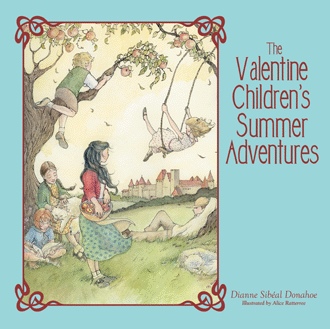 Nearly every enfant Valentine had a different couleur (ku-lœr: color) of hair. Annalise had noir hair. Brigitte had brun (brõe: brown) hair. Claire had roux (roo:ginger/red) hair. Dagobert had chatain (sha-tunh: chestnut) hair. Eugenie had blond hair, and Etienne's hair had the same couleur as Eugenie because they were twins. Les enfants were all beaux (boe: beautiful), but Annalise was so belle that everybody who saw her fell in love with her.

Les enfants always dreamed of aventures (ah-von-tur: adventures) in Carcassonne with faraway looks in their eyes. They could see the tops of les remparts (lay rom-par: the ramparts) of Carcassonne. Because they were too young to travel to la cité alone, they used their imaginations to play, and invented games about the walled cité. One game was hide-and-seek. Les enfants pretended they were hiding inside the walls of Carcassonne, and they had aventures there.

Madame Elyse had a favorite child: Dagobert. She favored him because he had greatness in him, or so she thought. He was also brilliant and very clever. She wanted him to become a politician, and he liked the idea.

Dagobert liked mathematics and loved working on crossword puzzles. Dagobert was named after a very good king who helped make Paris (Pah-ree: Paris) the capital of France many centuries ago. 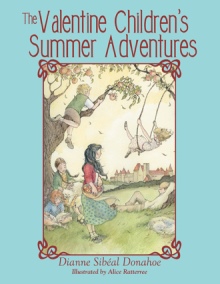 Dianne Sibéal Donahoe’s inspired story about the Valentine children is a true treasure. Set long ago and far away in France, she shares the adventures of the children and their animal companions during their summer vacation of 1938, just before the start of World War II.

Dianne weaves a tapestry of history and culture into the tale so scene by scene the treasure grows. Set outside the true and real hewn-stone city of Carcassonne, readers will relish in the rich imagery of memorable illustrations by award winning artist Alice Ratterree which bring the Valentine children’s adventures to life.

Dianne Sibéal Donahoe has sampled a fascinating variety of cultures and histories through worldwide travel. An avid artist and connoisseur, she lives with her husband in San Francisco and Manhattan. A portion of the proceeds of this work will be donated to the University of Washington’s Educational Unit.