Solving for X in the Y Domain 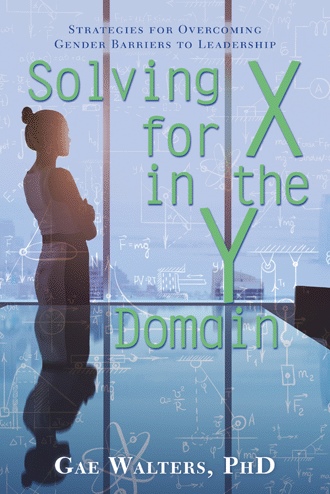 There is a gap in the leadership literature regarding the lived experiences of senior women executives who have successfully overcome gender bias and backlash in male dominated professions.  A great deal has been written about the organizational and societal barriers to women who seek leadership.  Much less is known about those women who did not rely on the organization to remove the structural barriers to advancement but took it upon themselves to act upon the environment and find ways to reach senior leadership positions.  This is the significance of the study.  This study sought to discover the essence of the experience of using self-monitoring strategies, impression management, political skill, and performance to counteract gender bias and provide successful strategies for other women striving to achieve senior leadership positions in male dominated fields.

The literature clearly indicates the prevalence of gender disparity across male dominated organizations such as STEM (Hewlett, Buck Luce, Servon, Sherbin, Shiller, & Sumberg, 2008; Wentling & Thomas, 2007).  Even though more women than ever before are graduated with advanced degrees in science, technology, engineering and mathematics, the number of women in leadership positions in these fields continues to be extremely low (Fox & Colatrella, 2006; Hewlett, Buck Luce, Servon, Sherbin, Shiller, & Sumberg, 2008).

The National Council of Women in Technology found that when diverse groups design IT solutions, the solutions are more successful because the needs of a wider constituent group are usually sought and incorporated into the final design (Rose & Thomas, 2009).  STEM organizations whose clients are in the government sectors are required to show evidence of team diversity in order to be eligible for multi-million dollar projects (Svara, 2003).  Women leaders bring a unique worldview and a competitive edge that could be vital to the success of any business.

The conceptual framework of this study begins with an understanding of the masculine construction of leadership which incorporates Schein’s foundational theory of gender bias, “Think Manager – Think Male” (1993) and Eagly & Karau’s role congruity theory (2002), which describes the characteristics of agentic behavior (aggressive, determined, ambitious, and task focused) versus communal behavior (interpersonal, empathetic, friendly, and compassionate) in leadership.  These theories of gendered stereotypes of leadership create the organizational landscape that women must navigate in order to reach senior leadership positions.

The fourth element of the conceptual framework draws from gender schema theories (Lemons & Parzinger, 2007) and theories of gendered organizations (Acker, 2006; Ridgeway, 2009).  Women seeking positions of leadership in male dominated professions often encounter cultural “inequality regimes” (Acker, 2006, p. 443) and report that they do not feel as though they fit and do not belong (Wentling & Thomas, 2009).

The theories that describe how women overcome gender backlash and bias provide the last element of the conceptual framework.  Self-monitoring (Gupta, 2013; O’Neill & O’Reilly, 2011), impression management (Hirshfield, 2011; O’Neill & O’Reilly, 2011), political skill (Shaughnessy, Treadway, Breland, Williams, & Brouer, 2011), and performance (Jalbert, Jalbert, & Furumo, 2013) are all elements to be explored within the study.  Bandura’s social cognitive theory (2001) is central to the entire study as it describes the concept of self-efficacy.

Increasingly, albeit in small numbers, women are overcoming the forces that have prevented qualified women from entering the executive suites of organizations. However, very little is known about the strategies for overcoming gendered obstacles and reaching senior executive roles, particularly in male-dominated fields.

In Solving for X in the Y Domain, sixteen women who are leaders in the fields of science, technology, engineering, and mathematics (STEM) describe their experiences with overcoming gender-based barriers to reaching senior-level leadership positions, and they share these strategies and skills with other aspiring women. This study adds a new dimension to the body of knowledge by describing women’s strategies, behaviors, and skills for overcoming gender bias and backlash, with the differentiating aspect of this study being a focus on women who have empowered themselves to seek and to find strategies and behaviors that enabled them to surmount the specific obstacles they encountered. Their detailed accounts incorporate extensive layers of situational facts as well as their feelings, impressions, perceptions, thoughts, and reactions. Women leaders’ experiences in the use of buffering behaviors—self-management, impression management, political skill, and performance—provide a template of behaviors to successfully mitigate the effects of gender-based barriers.

These inspiring professional women did not give up, they did not quit, and they were tenacious in the face of disheartening and demoralizing situations. On occasion they become discouraged, angry, incensed, and frustrated. However, they continued to direct their energies and their intellects toward solving for X in the Y domain.

Gae Walters, PhD, is an organizational psychologist and executive coach with expertise in leadership development, team effectiveness, and the behavioral sciences. She works extensively with women who hold senior leadership positions in the STEM professions, with discussions often centering on developing strategies and responses to issues of institutionalized gender bias and backlash. Dr. Walters served as the vice president of organizational development for a major worldwide hotel chain, and she is a mentor and adviser for the Society for Women in Engineering and the Women’s Innovation Network. She is also the sole female member of the board of directors of a global engineering and construction firm, where she advocates for women’s roles in senior leadership positions.