Dalriada: The Dawn of a King

A Novel of Love, Honor, and Fury 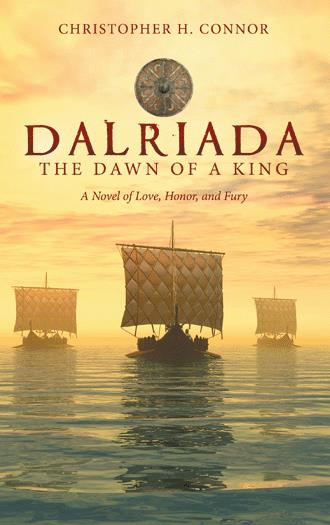 Drostan spoke again, “Brothers, it is your task to defend our home. Should the Britons separate, seeking to elude us, you shall be our rear guard to protect the families of Renton.” He paused and studied the three. “Tell Mother and Nessa I love them, and tell young Donald that I shall see him soon.”

Drostan’s words softened Coric’s angry spirit. There was no more to be said. Coric would honor his father’s wishes and return home with his brothers. He would work to help the women and children of the village, watching over the animals and tending to the barley harvest if the men hadn’t returned in time.

The sun faded from Coric’s eyes as he stood in the shadow of his brother. Coric turned to his father. “Father, I shall go home with my brothers. Promise me that you will return and that you will call for my sword the next time you gather the men for battle. I will prove to you that I have what it takes to fight.”

Alpin gazed down from his horse, staring at Coric. “My son, I am proud to be your father. You do not need to fight to prove yourself to me. War is not the friend you presume it to be. Death is not the friend of any man – though you are right to see that certain times require a man to fight. Trials beyond ourselves demand of us to protect those we love.”

Alpin paused and looked at the two younger boys and then back at Coric. He continued, “For every man there comes a day that his life will be asked of him, and he will give his life on that day. My son, the times grow ill, enemies threaten our land and our way of life. In the days ahead I fear that peace may be fleeting, stolen from our hands if we are not vigilant. Your sword and shield will see more blood than your eyes desire. I am not eager to cast you ahead so quickly. I am content to watch you grow into the man you are destined to be. The day will come that you are called to commit your life to the fight – but today shall not be that day.”

Alpin looked upon his son as if peering into his soul. Coric stood solemn under his father’s gaze, absorbing his words. For a moment, time stood still.

Coric swallowed and slowly lowered his head. He could not help but wonder the fate of his father. Would he ever again look upon his father? He knew his father loved him. Though often hidden in his words, his actions had always convinced Coric of such.

Alpin’s horse twisted beneath him. The animal was eager to ride and the time to depart had come. Alpin faced his three sons, “Be of good courage! Defend Renton!” Snapping the reigns of his horse, he turned and steered the animal south to Dumbarton.

“Return with their heads, Father!” Aiden shouted. He made a slashing wisp through the air with his hand, pretending to slice his opponent.

Kenneth smiled at Drostan, “Return soon, you know how Mother and Nessa worry.” Searching for something more, he finished, “… be swift and show them how Dalriadans fight!”

“And bring back a dagger from the fallen Britons,” Aiden yelled, still caught up in his make-believe battle and working to gain the upper-hand over his enemy.

The men followed Alpin, riding past Drostan as he shifted on his horse. Drostan tightened the grip on his reigns and he turned and gazed down at Coric. “Smile my brother, our day shall come. Let not your sword grow dull … it is up to you, for now, to keep these mischievous rogues in line. I shall return soon and we shall spar again.” He nodded and sized Coric. “Don’t grow weak,” he playfully prodded and trotted forward to catch the others.

“It is not I, whom I fear will grow weak … I look forward to matching skills when you return,” Coric called out, refusing to smile.

Drostan glanced back and smirked.

The gesture unarmed Coric and his mouth formed a youthful grin. Drostan was everything Coric wanted to be.

Drostan lifted his hand into the air and gave a final wave before turning to catch the men.

Coric, Kenneth, and Aiden fixed their gaze on the fading silhouette of their brother, longing for the day when they could be him.

As Drostan finally disappeared from sight, the mountains of Renton already seemed eager to beckon him home. 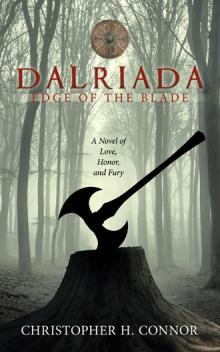 As Scotland struggles to emerge in 824 A.D., the people of Dalriada are attempting to endure within a dangerous land where only the most courageous deeds assure survival. While Dalriadans battle for freedom, adversaries advance on every side. Lands to the south and east bring both Briton and Pict while the seas to the north bring the villainous Vikings. The call to the Dalriadans is clear—either fight or die. Alpin and his sons, Coric and Kenneth, are champions of the calling. But these clansmen need more than swords to save their people. They need the heart of a king. As the men struggle to survive the cunning Picts and savage Vikings, treachery imperils the land and prompts Kenneth to set out on a quest to unite his people. But can he carry out his task without forsaking his betrothed, Arabella? Now as the future hangs in the balance, Kenneth and the others must rise up to secure their precious freedom before their savage enemies rob them of life, love, and their destiny. In this rousing historical tale, a Dalriadan clansman and his sons answer a calling that asks them to sacrifice everything in order to ensure the future of their beloved land and family.

Christopher H. Connor lives in Tullahoma, Tennessee, with his wife, Gina, and their four children, Colton, Casen, Cassidy, and Caryss. Dalriada: The Dawn of a King is his debut novel and the first book in a trilogy.