Towers on the Beach 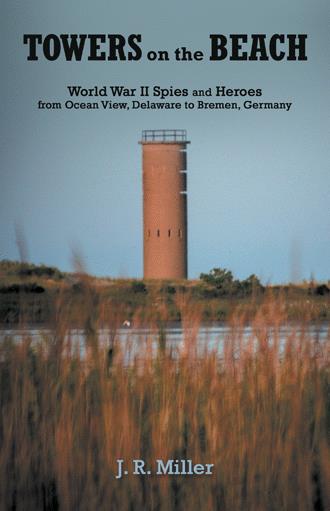 She is staring into his wide blue eyes and she knows at that moment she wants to kiss him. She pulls him close and he places his hands on her shoulders. Her heart is pounding. Is he feeling what I’m feeling? He gently lifts her chin and kisses her. His lips are warm and soft. She could scream with excitement. He places his hand on the back of her neck and pulls her closer to him. He kisses her again with more intensity and she suddenly pulls away. He steps back and sees that her eyes are moist. She looks at him with tenderness in her eyes. “I better get back to the party.”

Paul touches her arm. “Let me walk you over.”

“No, I’ll be fine. Get back to whatever you were doing. Be careful with that pistol. My Dad keeps his under his bed. You never know when the Germans will land.” She slowly walks back to her house.  Her mind is racing. She thinks, This is crazy! What just happened?

When driving south along the Delaware Atlantic Coast between Rehoboth and Bethany, several concrete towers, weathered by the ocean, can be seen on the beach. They are symbols of a nation at war, built to safeguard the Atlantic Coast from a German sea invasion during World War II. When the towers were built, there were soldiers stationed along the coast and even a German POW camp.

McKenna is a young woman living with her family in Ocean View, Delaware during World War II. Her life—and the lives of the people she loves—is turned upside down by the arrival of a young man named Kurt. Kurt grew up in Germany. With the rise of Hitler, his father moved quickly up the military ranks, so Kurt was eventually expected to do the same. He begrudgingly became a German spy.

Undercover in America, Kurt’s loyalties wander, especially when he meets McKenna. Fighting the darkness of war, they find light in each other, but how can Kurt love her while living a lie? It’s time to make a choice: will he forsake the woman he loves or the country he serves? The horrors of war are wrought with difficult decisions as Kurt and McKenna struggle through tragedy, patriotism, and the power of self-discovery.

J.R. Miller was born in Baltimore, Maryland, in 1944, two months after the D-Day invasion of France. He attended the University of Baltimore and received a BS degree in Finance. He also holds a Master’s degree in Governmental Administration from the Fels School at the University of Pennsylvania. He held executive positions in governmental procurement and was an instructor and consultant for NIGP—The Institute for Public Procurement. He has authored textbooks and taught procurement classes throughout the United States and Canada. Additionally, he was an adjunct professor at Harford Community College in Maryland and the University of Virginia. J.R. had a home near Ocean View, Delaware and was fascinated by the history of the area, especially during WWII. He was surprised to find the purpose of the fire control towers that sit on the Delaware beaches, the discovery of a prisoner of war camp in Bear Trap, the impact of German submarines just offshore, and the landing of German saboteurs along the Atlantic coast. World War II had a major impact on the “Quiet Resort,” and this story of historical fiction tells a tale of families living in Ocean View and how their lives were transformed by a German boy born in Bremen, Germany. It is a story of love of family, survival and people making difficult choices. It is also captures how the horrors of war are lived at a very personal level.