The Remarkable Story of Willie the Crow 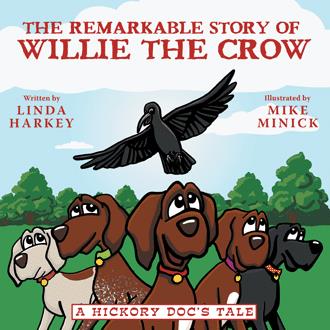 Ma always said, “Doc, never forget there are three categories of creatures. The first, DOGS. The second, PEOPLE. The third, EVERYTHING ELSE.”

That reminds me of when Patch and I first met Willie the crow. Since Willie was not a dog or a person, he obviously was in the third category of creatures – EVERYTHING ELSE.

It all started when Patch and I were napping on the back porch of the Lazy Dog Hacienda. Suddenly, a young black crow swooped down from the sky and landed on Patch’s head. I say young because he let out a caaw sound just as he fell out of the sky. All dogs know that young crows make caaw sounds, while adult crows make CaaW sounds. It sounds pretty weird to us, but that’s one reason we call crows EVERYTHING ELSE.

The crow fell off Patch’s head and landed on his back in the grass. Boy, did he look funny with his two little legs sticking up in the air. I couldn’t believe it! A crow delivered to us. Didn’t he know that crows and dogs were not friends?

Patch, startled, woke up. “Doc, look at that crow! Why did he come right to us?”

“Wait just a minute you two. First of all, my name is not crow-it is WILLIE. Second, I was not sent to you. Uhmmm, I thought you were the ground. After all, you both are dark brown and from up in the sky you looked like dirt.” It was hard for Willie to complete his idea. He had his two legs straight up in the air. Every dog knows that birds on their back have a hard time talking.

Patch and I started howling. “You are a very funny crow.” Patch replied while she used her nose and paws to place Willie on his feet again. “You obviously need to wear those . . . what are they called? Oh, yeah, I remember, the people call them glasses!”

“I don’t need to wear glasses. I see perfectly well. Besides, whoever heard of a crow wearing glasses. I can see well enough to know you’re nothing more than a young pup. I – I – do, however, want to thank you for turning me over. I would hate to be on my back for the rest of my life. It would be very hard to catch and eat mice, insects, or even acorns.” Willie flapped his wings and stood as tall as he could. 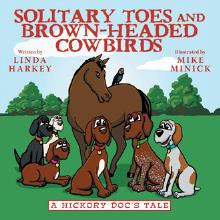 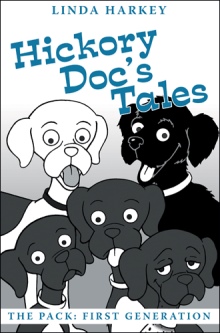 The pack at the Lazy Dog Hacienda in Oklahoma includes five dogs: Doc, the oldest and wisest; Zeke, his annoying younger brother; Patch, Doc’s daughter; Rush, Doc’s son; and Newt, a black Lab who is part of the family.

One day, when Doc and Patch are napping on the porch, a young black crow swoops down and lands on Patch’s head. This is how the dogs meet Willie, a crow with bad eyesight who becomes the particular friend of Patch. Although the other dogs don’t like Willie very much, Doc knows Patch can learn a lot about birds by playing with the crow. Then one day, Patch accidentally falls into the swimming pool and isn’t able to get out. Doc and Zeke can’t swim, so Willie is sent to find Newt to rescue Patch. Will he make it in time?

Featuring fun color illustrations, this children’s story shares how a pack of hunting dogs and an extraordinary crow become friends and learn from one another.

“These hunting dogs jump off the page and come to life through Linda’s tales of their adventures as they face challenges in life. I am a second grade teacher in Eagle Nest, New Mexico, and I also organize our public library summer reading program. Linda’s stories engaged our students in the lives of these dogs sparking great discussions and learning activities about character development, sequencing, and elements of the story. One student brought a stuffed puppy dog named after Zeke to join the fun every week.”

I had the opportunity to spend the summer doing a summer reading program in Northern New Mexico where we read Linda Harkey’s book, Hickory Doc’s Tales. When we got to the chapter, “Willie’s First Secret”, the kids loved it and eagerly wanted to figure out the “secret”. The last paragraph revealed there were more secrets, so the kids wanted to know more stories about Willie. I am so excited that Willie’s secrets will be revealed in this new children’s book. I can’t wait to enjoy it with my students!

Linda Harkey, a former teacher, has been an enthusiastic hunting dog owner for over thirty years. She has been involved as a docent at local museums with the writing of curricula for children’s programs. She is also the author of The Budding Staff and Hickory Doc’s Tales. She has two children and three grandchildren and lives with her husband, Mike, on Ocate Mesa outside of Angel Fire, New Mexico.

Illustrator Mike Minick has been drawing ever since he was a young pup. He graduated from the University of Oklahoma with a bachelor of fine arts degree and currently owns a creative studio in Tulsa, Oklahoma, where he lives with his wife, Joey, and their kids.