An Otter's Tale, on a Grand and Global Scale

by Pavle Sabic & Illustrated by Via Fang 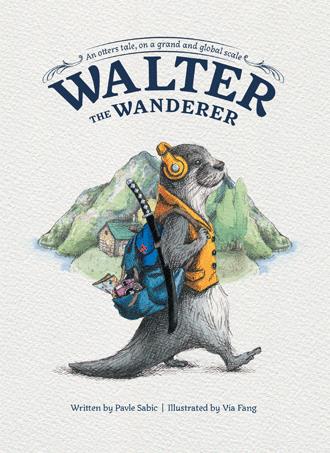 Walter did not speak their language. So he climbed up a tree and at the sky he stared, wondered how could he show them he cared?

Walter the Wanderer is our friend
He traveled the earth from end to end
He went to Scotland and then to Spain
While in China, he met a crane
Italy and France were on his plan
He met a Samurai macaque in Japan

Walter the Wanderer teaches us how to lead with love and celebrate the diversity of others.
Join Walter as he travels the world inspiring compassion and friendship through the simple gift of a hug. We hope that the book will inspire reciprocity and kindness. The world needs the love.

Pavle Sabic's career has spanned 15 years in a variety of industries in U.S., Europe, Middle East, Latin America and Asia, including hospitality, sports, philanthropy, finance, technology and media. Pavle is currently based in Brooklyn, USA. His family emigrated from Croatia to Scotland when he was nine, where he graduated summa cum laude BSc from Heriot-Watt University and holds an MSc from the University of Edinburgh. Pavle also attended New York Film Academy in 2015. Pavle is a Senior Director and business head at a Fortune 500 technology company based in Manhattan. He is also an investor in philanthropic technology and an international ski coach. Pavle has been published in the media (WSJ, Forbes, FT etc.), and is a regular broadcast contributor to CNBC (USA and Europe). Having a lonely-planet disposition has taken Pavle all over the world. He has lived and worked in: Croatia, Scotland, England, Italy, Spain, Andorra, Dubai, Hong Kong and the USA. Over the 15 years that Pavle has been a ski instructor he has taught kids as young as 4 and as mature as 65. His teaching extends to elementary schools for the charity Junior Achievement of New York, were he taught 2nd and 3rd grade student basics of finance. Taking from his life's setbacks and experiences, his belief that travel, play, compassion, and curiosity are fundamental to our existence, Pavle decided to write the children with the help of his friends Via Fang and Jonny Smith (also educated in Scotland). In the hope that the world will share compassion and love.