How They Made It in America

Success Stories and Strategies of Immigrant Women: from Isabel Allende to Ivana Trump, to Fashion Designer Josie Natori, Plus More 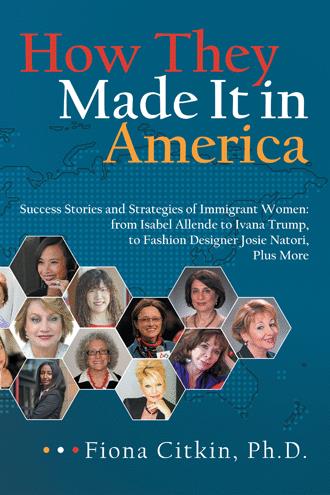 Writing this book has been a labor of love. It was a privilege to interview the professional women featured here, to learn from a diverse group of achievers who have had the courage to cross cultures, countries, and oceans in the hope of a better life in America. The individuals in this book are a special subset of American women, namely, immigrant women leaders with complex and fascinating stories who—although prominent within their own unique social and professional circles—have never before been viewed as a group. It’s my hope that this book will act as an icebreaker, that it will break through the frozen waters of public inattention and bring recognition to the vast contributions made by these women, encouraging us to admit that we as an American society are richer for their presence.

I’m probably better positioned than most to appreciate the cross-cultural experiences of the eighteen prominent immigrants profiled here. I understand these women and their aspirations because, like them, I also came to America from another country and culture. I understand their challenges, and their enthusiasm too. It’s important, as a newcomer, to integrate into American culture. And it’s a daunting task.

My roots in the Ukrainian intelligentsia have been a source of great resilience for me. I know what it’s like to have my old life reduced to ashes, and to start fresh in a foreign land. Indeed, I’ve had to reinvent myself more than once. My professional experience includes two doctorate degrees and a career in academia: visiting professorships at several major European universities; full professor and chair of the English Department at Uzhgorod National University, Ukraine. These were my busy-happy-youthful years. I was doing work I loved, contributing to the country I loved. And yet, over time I started to feel like a stranger in my own land and increasingly comfortable during my assignments abroad. Professionally and politically it was a complicated and emotionally charged time. In the early 1990s, just when I was coming into my own, Ukrainian and Russian intellectuals like myself were faced with a painful choice: remain stuck in a corrupt society steeped in widespread collaborationism with the KGB and government bureaucracy—or emigrate.

I knew what life was like in established democracies. I had stayed with an English family during my teacher-study semester at the University of Edinburgh in Scotland. I had been a research fellow at the University of Vienna and the International Information Centre for Terminology (“Infoterm”) in Austria. After the publication of my book Terminology and Translation, I was a frequent conference participant and plenary speaker all over Europe. I was well aware of the quality of life in the West—and the dim prospects of life in Ukraine.

My husband and I had the means to support ourselves and our sixteen-year-old daughter Helen, but we wanted her to grow up in a country where she could fulfil her potential through her own efforts—not because of bribery, conformism, or her parents’ connections. Emigration was in the air, and we pounced on the opportunity with nothing more than a vague idea of what we’d have to go through. When my Fulbright grant to America materialized, I went to my friend and our university president, Volodimir Slivka, to bid him farewell. He didn’t mince words: “You need to use your brains and stay in the States. I’m sitting higher than you, so I can see farther. You won’t like how things are going to develop here. I do wish you well, there.”

It was our last conversation. Some ten years later I learned that he had been stabbed to death, allegedly by his political rival. The case never went to court.

Conducting my Fulbright research at Kent State University in Ohio, among colleagues who knew me through European conferences, I began to establish myself in American academic circles. When my husband received an attractive job offer from a New York company, I gave up my research post to move to the East Coast, where I knew no one and academic positions were harder to find. Eager to try something new in my new country, I secured positions as a public relations manager at a global computer company, followed by a director’s position at Berlitz Language Center, and then, as regional director of a similar company headquartered in Canada. When I felt that I had learned enough about business to start my own company, I set up Expert MS Inc., an intercultural consulting firm. Moving from the academic to the corporate world, I had to retrain myself and reframe my experience. That meant not only appreciating the complex issues faced by corporate clients with a diverse employee base but using my multicultural background to help them.

Today I feel deeply rooted in America, but not so much that I have forgotten where I came from. It feels good to be internationally recognized for having reinvented myself in a new country and culture, and to help others through my work. My own struggles as an immigrant in America have helped me understand what skills people need to develop in order to succeed in the U.S.—and the special set of challenges faced by immigrant women.

Immigrants have been coming to America since the beginning of the seventeenth century in pursuit of their dreams and a better life. Unfortunately in recent years, these very people who have been helping to shape the American Dream for centuries have become targets of abuse.

Fiona Citkin, who immigrated to America from Ukraine, examines the individual experiences of eighteen immigrant women from around the world and from all walks of life who today serve as models of success. In sharing their unique and complex stories, Citkin demonstrates how these women succeeded in America under exceptionally difficult circumstances through drive, grit, intelligence, compassion, and leadership skills. Citkin also captures their collective wisdom and explores the values that drove them to action and success, and presents specific advice that will inspire other success seekers to follow in their footsteps.

How They Made It in America shares the authentic stories of prominent multicultural female immigrants who overcame seemingly insurmountable odds to achieve success in the land of the free and the home of the brave.

Fiona Citkin is an award-winning author, blogger, and internationally renowned intercultural consultant who learned about American brand of success the hard way. Today, this former Fulbright Scholar from Ukraine is deeply rooted in America. Dr. Citkin and her husband, Alex, have a daughter, three grandchildren, and reside in Warren, New Jersey. Visit her at http://fionacitkin.com/.