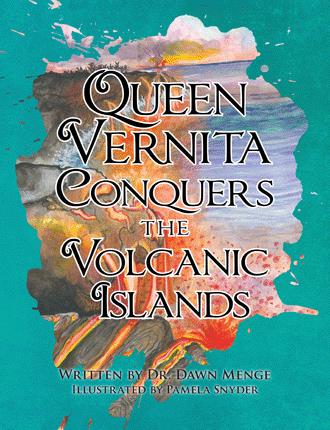 Heather and Ireland were busy making leis out of beautiful pink and violet hibiscus flowers.

“How gorgeous your leis are and their aroma is intoxicating!” exclaimed the Queen.

“I am helping Ireland make thirty leis, one for each day of April to celebrate spring with her classmates. Ireland has trouble with her ability to use her fingers due to her Rhett Syndrome,” Heather explained as she laced another flower onto the string.

“Ireland is beautiful. What is Rhett Syndrome?” asked the Queen.

Monday, the Queen learned that Rhett Syndrome is a genetic brain disorder.

Wednesday, Heather explained it is a rare neurological and developmental disorder.

Thursday, the Queen saw Ireland’s lack of use of eye and body movements.

Friday, Heather explained to the Queen that even though Ireland doesn’t speak, she has many facial expressions that speak louder than words.

Saturday, Heather explained that Rhett Syndrome mainly affects females, and is a mutation of the MECP2 gene.

Sunday, Heather informed the Queen that Rhett Syndrome is so rare that it affects fewer than 20,000 children in the Kingdom per year.

The Queen soon had so many leis, she could hardly carry them. But she put a single red hibiscus flower behind her ear signifying that she is not married. This is a Tahitian custom she learned. The fragrant aroma followed her as she found Brent waiting for her to take her to the Orange Sand Beach.

The Queen of the Land of Quails is preparing to travel to the mysterious Volcanic Islands to meet twelve of her wonderful new friends. After she leaves her loyal subjects in charge of keeping her castle safe from harm for the next year, Queen Vermita boards a boat and heads out on her latest adventure.

The Queen’s first stop is to visit her friend Nicole at the black sand beach at the bottom of a beautiful valley where she learns all about the hawksbill sea turtles and hawaiian monk seal. Her journey takes her to a new place every month, where she explores volcanoes, pink and orange sand beaches, walks along the hot lava, scuba dives under the sea, and learns about all the flora and fauna that call the islands their home. Along the way, the Queen meets many amazing new friends who are each special in their own way.

In this continuing tale, an adventuresome queen travels outside her castle to the Volcanic Islands, where she learns how important it is to respect the natural wonders of her kingdom.

Dr. Dawn Menge has won thirty-one national awards as the author of the Queen Vernita educational series. She holds a PhD in Curriculum and Instruction, a master’s degree and a Clear Credential in moderate/severe disabilities, and a bachelor’s degree in human development. Dr. Menge has been teaching severely handicapped students for nineteen years. She has three children and five beautiful grandchildren and lives in Southern California.