The Life of Gus

The Dog with the Big Head 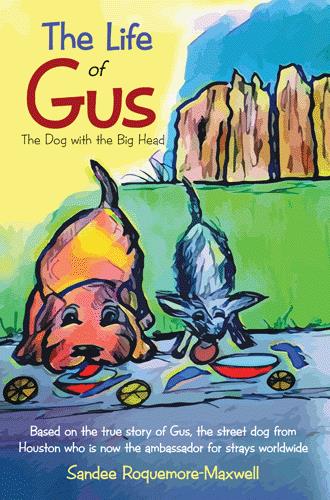 The day passed and evening was coming so Trixie left again to find food. She knew I was way too sick to help her so I stayed home alone. A little time had passed and I started hearing voices. It sounded like 2 boys and a girl and I immediately became deathly afraid.

What if they threw cans at me?This had happened once before and it was scary and I became soaked with what was coming out of the cans. Or they might throw rocks at me like those boys were doing to Trixie when I first met her. Or what if they had one of those long things that made me hurt all over when they pointed it my way? I was afraid but I was too sick and weak to run, so I just stayed where I was and hoped they would not find me.

All of a sudden I heard the voices come closer, these kids sounded nice, but how could I be sure? They were not laughing and joking like the other kids had done. I don't know why, but for some reason I just knew they were not mean and that I could trust them. And I knew I needed them, I knew I needed help or surely I would no longer be around to protect Trixie. So I stood up and walked around the corner and there they were.

Gus was once a much-loved dog who lived a happy life. Then things began to change. His owner neglected and eventually abandoned him. He suffered abuse and cruelty from passing humans, deteriorating physically and emotionally. Over time, things out of his control began to shape Gus, his life, and his future.

Gus was found by local rescuers in September 2018. He was in horrific condition, so he was immediately taken for medical treatment sponsored by the Houston K-911 Rescue group. Gus had many medical issues to overcome, he had a long recovery with lots of support from people all over the world, but now he is happy and healthy. Gus has a forever family now and he is loved, pampered and cherished, as every dog should be.

Author Sandee Roquemore-Maxwell has worked with rescue dogs in the Houston area for many years. She understands that the key to a better future for animals is to teach the next generation to have compassion for those left in their care. The story of Gus reminds kids how to love their pets, and what to do if they see one abandoned, while instilling respect for animals everywhere.

Sandee Roquemore-Maxwell is a long time lover of our four-legged furry friends. This is the first in her series of children’s books written to help little ones see that animals are to be loved and treated with respect.