The Secret Yoga of the Vikings

How Odin was Lost

by Steven A. Key 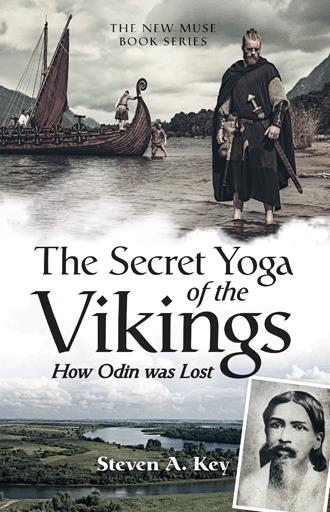 As a young boy, I was entranced by reading books about the mythologies of past cultures such as the Greeks, the Norse and eastern literatures. As a child growing up in Germany, I was especially fond of Thor; he represented all the simple virtues and strengths that a young fellow could want. Back then, I treated the Thor myth in a fanciful-fantasy fashion, not unlike those today who go to movie theaters to see new versions of the handsome, rugged modernized Thor. Like those souls watching the latest cinematic version of Thor and his godly friends and enemies, I had no idea that there actually was a deep spiritual and neuropsychological underpinning to a certain secretive portion of the old, original Norse lore called the Poetic Edda. This spiritual underpinning is far more entrancing than any mere cinema display.

In various parts of the world today, there are many passionate lovers of the mysterious Vikings and their secretive poetic lore, which involves an even more mysterious pantheon of gods led by Odin the All-Father, Thor, the great Hammer-Striker, Loki, the Evil One, and Heimdal, the Cosmic Horn Blower. There are even more passionate lovers of the multi-faceted Yoga systems devised by the ancient Hindustani in India over 5,000 years ago. It is this authors opinion that transcendental Yoga has not only endured over the millennia, but that it has also anonymously traveled in different forms of spiritual or religious expression. Yoga has overtly and covertly spread to all corners of the globe and is an essential feed to other spiritual systems, such as Buddhism, even Christianity, and in our specific case, the 10th century Vikings. This Yogic cultural diffusion is a primary theme in this book. In the Poetic Edda, amidst the babble of outer, mythical stories, there are just a few cryptic references to a legendary tradition of Norse spiritual warriors called the Einherjar. This spiritual cult of the anonymous ‘Odin’ warriors died out long ago. It no longer exists but was likely responsible for the writing of the Poetic Edda itself. We infer here that the mysterious Einherjar...are actually the Norse Bards themselves, perhaps depicting themselves in the Edda, as spiritual alter-egos, in a clandestine sense.

With their secretive poetic lore and even more mysterious pantheon of gods led by Odin the All-Father; Thor, the great Hammer-Striker; Loki, the Evil One, and Heimdal, the Cosmic Horn Blower, it is almost impossible not to love the Vikings.

But there are even more fans of the multi-faceted yoga systems devised by the ancient Hindustani in India more than five thousand years ago.

Steven A. Key makes the case that transcendental yoga has not only endured over the millennia, but that it has traveled in different forms of spiritual or religious expression in The Secret Yoga of the Vikings.

Drawing on the writings of Joseph Campbell, the famous mythologist who hinted at a link between the cultures of the Eastern Hindus and the Northern Vikings, as well as other great thinkers, the author shows that yoga has influenced Buddhism, Christianity, and yes – even the tenth-century Vikings.

Discover how a spiritual cult of anonymous Odin warriors who died long ago was likely responsible for the writing of the Poetic Edda itself as well as the role transcendental yoga played in the life of the Vikings.

Steven A. Key once had a career taming the largest computer systems in the world. As a deeply researching technocrat, he was ideally suited to leverage his investigative skills and interest in all things pertaining to body, mind, and spirit to create the provocative NEW MUSE book series. The Secret Yoga of the Vikings is the first book in the series and reveals the hidden yoga of the tenth-century Norse poets.