How Languages Changed My Life 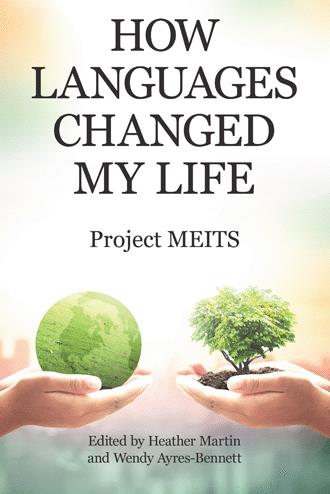 It was one of those glorious ideas you have when you’re ten years old. I sat my football team down and told them my new plan. This time it couldn’t fail. This time we would be champions for sure.

All we had to do was learn Italian. We had a good half hour before the match started. I’d brought the pocket dictionary I’d found on the bookshelf back home and I even had a portable blackboard. I chalked up the word ‘AVANTI’ in block capitals. ‘That’s what we say when we’re passing forward,’ I explained, with supreme confidence, ‘and when we want to go left we say SINISTRA’. We would bamboozle the opposition with the dark arts of our foreign language skills.

The only hitch was my own side was just as bamboozled.

Forty years later and I’ve been to every country in South America except Bolivia, but I still haven’t made it to Italy. Even though in school I told my French teacher I was going to move there. I’d always liked French, ever since I learned to sing ‘Sur le pont d’Avignon’ at the age of four.

I didn’t come from an academic family. My parents were rural working class and my brother and I grew up in Hemel Hempstead with limited horizons. We never had a car or a phone, and I remember life without a fridge or a television or a washing machine. My mother worked as a librarian, which in those days was a profession for rich housewives and a major achievement when you consider she came from destitute poverty and her dad yanked her out of school the day she finished her O Levels.

My father never got further than a weekend in Dublin. There was no contact with other languages or the outside world. I remember going on holiday to Folkestone when I was five and being able to see the lights of Calais and thinking it was magic – over there they speak a different language! Then there was this kid down the road collecting a sticker album, and I remember looking at his stickers. There was one of a Peruvian player that struck me as the most wonderful thing I’d ever seen – the shirt, bright white with a red sash, and the Andean features. It was one of those ‘wow’ moments when you realise there is such a thing as diversity.

When I left university all I knew was I wanted to do something on my own terms. Like when I’d formed my own football team or put together my own band. That was another turning point, seeing the Beatles on television and thinking, I want to be a Beatle, can I be a Beatle?

But I’d hung up my bass guitar when I went to college. Then a friend got in touch. He was working at a theatre in the West End. It was one of those things where I went for a couple of weeks and ended up staying for years. The theatre was where I became truly international. And where I first discovered Brazil. The downstairs bar was entirely staffed by Brazilians and frequented by their mates. One day I knew two or three Brazilians, and the next I knew two hundred. It wasn’t long before I was speaking Portuguese. To this day I’ve never really studied it.

I decided to combine my old love of football with my new love of Brazil, and become a correspondent in Rio. I stayed in a hotel that was just over ten reais a night, then downsized to something cheaper. Eventually I ended up on someone’s floor, which was ideal, because they didn’t speak any English and nor did anyone they knew. There were plenty of days I went hungry. The only thing that stopped me going home was the thought of coming back to England in winter and having no job.

Then everything changed, including my luck. Nike signed a deal with the Brazilian team. Prior to that time, from the point of view of the European market, Brazilian football only existed once every four years. Suddenly there was unprecedented interest and I was the man on the spot.

My language skills have changed my life massively. I’m on Brazilian TV every week. I can do a two-and-a-half-hour show and the Portuguese flows. When I covered the 2018 World Cup it was mainly in social terms. The Brazilians can’t just enjoy the ride. They talk of the ones they've won and the ones they’ve lost as if it was heads or tails, like they were one of two, not thirty-two teams. It’s about them measuring themselves against the rest of the world.

My favourite Portuguese word is chafariz, which means fountain. Say it aloud and you’re hearing the water. But there are two words any English speaker would know, without really knowing what they mean. One is social – roughly ‘proper’, or ‘correct’, or ‘formal’. You might speak of a camisa social (a smart shirt) or an ambiente social. The connotations are completely class-based. It’s the same with popular. Nothing to do with popularity, but means rather ‘of the people’, belonging to ordinary, everyday folk. It isn’t necessarily derogatory. A sign saying preço popular indicates that something is affordable to everyone.

It’s about getting into the mindset of another people, like reading. When you read a book, you’re being invited inside someone’s mind, and unless you have the linguistic skills you can’t accept that invitation. You’ll be the one on the outside looking in.

Sometimes people ask how I know all the things I know about South American football. The answer is simple. Curiosity. Curiosity is the key word – for football, for languages, and for life.

How Languages Changed My Life is a collection of stories exploring the importance of languages in shaping the lives of individuals and communities around the world. It brings together writers and musicians, politicians and activists, teachers, students, scientists, comedians, and sportspeople whose experiences are both unique and exemplary. The first-person voices are conversational, intimate and uplifting, but also often very funny and deeply moving.

This book is for anyone who loves real-life stories; is interested in languages, culture, and adventure; and believes in global citizenship. It embraces more than forty different languages and offers a kaleidoscope of individual views that collectively make the case for linguistic diversity being as essential to our survival as biodiversity.

Irrespective of age and background, whether as first-time learners or professional polyglots, all our storytellers testify to how languages have inspired and empowered them. How Languages Changed My Life is a book for our times, reminding us that what we have in common is always greater than our differences.

Multilingualism: Empowering Individuals, Transforming Societies (MEITS) is a flagship research programme that brings together leading researchers in languages from across the United Kingdom. It seeks to demonstrate the value of languages both to individuals and to societies and the importance of speaking more than one language.