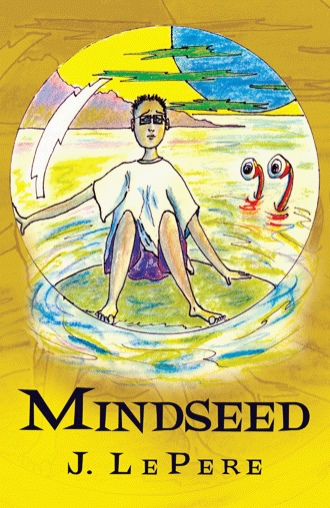 MINDSEED Chapter 1 The Treasure Seekers Freddy had one leg in his shorts when the stone hit his bedroom window. The clatter brought a muffled groan from the corner, but thankfully Adolph didn't wake up. Freddy noiselessly slid up the pane of glass, ruefully noting a new crack gleaming in the glow of the streetlight. “Quiet, idiot!” he hissed at the shadowy figure crouched in the blackness below. “I'll be right down!” He yanked a ragged tank top over his head and jammed his feet into holey sneakers. Then grabbed his backpack and crept into the hall. Moments later he slipped out the back door, muffling the noisy spring with a closed fist. Turning, he dropped soundlessly into the bushes and cuffed his waiting friend on the head. “Mike, you moron, you were supposed to just wait for me. You almost woke up Adolph!” “Oww!” Mike massaged his blond curls. “That dog's so deaf a cannon wouldn't wake him up.” “Yeah, but you broke the window. That'll take some explaining!” “Sorry.” “Never mind.” Freddy peered into the darkness under the steps and retrieved a bulky package. He straightened. “Where did you put the rest of our stuff?" “I left it over by the bikes.” The two boys had stashed their beach cruisers the night before behind a palmetto bush just down the street. They quickly arrived at the appropriate spot where Freddy placed his bundle on the ground, then made his way into the blackness behind the plant. He passed the bikes out to Mike. The tall grass was damp against his bare legs. Something made a clicking noise from the bush. “Watch out for snakes back there,” cautioned Mike. “Oh quit being a worrywart. Snakes don't come out at night.” Freddy wasn't as sure of this fact as he sounded, though, and he moved a bit quicker. Soon, bikes packed, they pedaled east. The sky started to brighten, and somewhere a bird cautiously warbled out a few careful notes. Moments later the low rumble of waves and the tang of salt air, (not to mention the stink of dead fish), told them they had reached their destination. The tip of a deep red sunrise was staining the sky by the time they chained their bikes to a coconut palm. “‘Red sun by morning, sailors take warning,’” quoted Freddy. Mike tilted his head. “What's that supposed to mean?” “It's something my dad says.” Freddy scratched his head. “I guess a red sun means it's supposed to storm later.” Mike squinted upward. “Sky looks pretty clear to me.” Freddy's backpack dangled behind the seat of his bike. Freddy’s mysterious bundle, wrapped in a grocery bag, poked out the top. With a Zzzzzip! Freddy undid the Velcro seam. He grinned at Mike, pulling off the grocery bag. “Check this out, dude!” Inside sat a gleaming gadget with a circle on one side of a skinny pole and a box resembling a portable video game on the other. A winding black wire connected the circle to the box. “This baby can spot a penny buried up to eighteen inches!” he bragged. “This is way cool,” breathed Mike. “We're sure to find somebody's lost ring or watch or something. Maybe even old pirate treasure!” “I read somewhere that a kid found a gold tiara from an old Spanish wreck on this very beach a few years back!” “A tiara,” wondered Mike. “What’s that?” “Some sort of crown for a queen or something. All covered in diamonds and rubies.” “Oh!” The boys stared at each other, eyes shining with greed. “Hey,” said Mike suddenly, “does your dad know you've got his new metal detector?” “No, dummy. Why d'ya think I didn't want to wake anybody up?” “I just thought you didn't want to wake anybody so they wouldn't get mad at you waking them up,” replied Mike. “Honestly Mike, for a smart kid you're pretty dumb sometimes.” “Won't he get mad if something happens to it?” asked Mike. “You’d better believe it. That cracked window will be the least of my problems! C'mon, let’s get looking before all the old geezers from Golden Palms get here.” Freddy was referring to the retirement center that loomed like an ugly white brick a half-mile down the beach. The residents, mostly over sixty-five, seemed to have moved into the newly completed structure with the sole idea of spending their retirement looking for stuff on the beach. The boys had gotten up before dawn to beat everyone else there. No such luck. From where Freddy stood he could already see multiple tracks of fellow treasure seekers crisscrossing the sand. Every once in a while the tracks were broken by a shallow hole, the sand showing the distinctive signs of someone having sifted around to find something. Several figures in the distance slouched about in various directions, arms moving slowly back and forth as they swept the sand with their metal detectors. The wizened figure nearest them, with skin like old leather, held up something in apparent satisfaction. Freddy stared helplessly. Mike's blue eyes bulged. “Jeez, they must have all gotten here at three a.m.!” “Yeah,” said Freddy peevishly. “So much for getting here early!” He grasped the handle of the machine and squared his shoulders. “Well, we're here. Let's look. There aren't as many tracks this way.” ‘This way’, of course, was in the opposite direction from the retirement home. At first, hunting was cool. The machine was a pleasure to use. Freddy found a penny buried in the sand, and he knew what it was before they dug it up. About ten minutes later Mike tried it out, and promptly found a bent shingle nail. The state-of-the-art digital display informed them each time what metal they had found, plus its shape, depth and size. Soon, however, the novelty began to wear off; the two treasure seekers started to feel rumblings in their stomachs and dust in their throats.

The tip of a deep red sunrise is staining the sky by the time twelve-year-old Freddy and his friend, Mike, chain their bikes to a coconut palm next to the beach. Anxious to try out his father’s new metal detector, Freddy is disheartened when, after hours of searching, he and Mike have nothing to show for it but six cents, a nail, and some bottle caps—and then Mike unexpectedly announces that he has found something.

The boys discover a small circular object beneath the sand, a strange disc covered in weird symbols. But when Freddy’s brother, Rick, shows up and snatches the shiny object from the boys, he is suddenly struck by lightning. Now, with Rick in the hospital and the whereabouts of the disc unknown, Freddy returns to the beach in the dark of the night, hoping to retrieve the treasure. He has no idea that with his find, he has unearthed an ancient menace that could possess his brother and threaten the very existence of humanity.

In this young adult thriller, an average kid must do everything in his power to stop an alien invasion and save his family before summer vacation ends.

J. LePere currently works in the medical profession. His hobbies include guitars, computers, gardens, and reading science fiction. He shares his home in central Florida with his wife, Debbie, and their dogs, BoStinkle and Ty Bone.