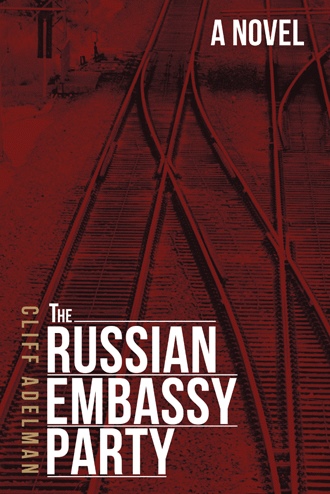 [Excerpt from The Russian Embassy Party]

Flush with a hangover from that Georgian dinner and its discoveries, Gennadi limped to the Frunzenskaya Metro the next morning, duly changed trains twice, and sat through nearly an hour of tunnels to see Uncle Fyodor. It was Sunday, so he knew Fyodor would be in the antiquities garden. The old man was now nearly immobile and his eyes spoke regret, just as the sage and roses spoke neglect. He sat before an open book, with both magnifying glass and glasses. Gennadi’s shadow pulled his head up. He playfully held the magnifying glass straight out arms’ length before his eyes, and asked, “Can I help you, sir?”

“No help required, Uncle Fyodor. It is your aging nephew.”

“Ah! You come to make my day sing with sunshine, Gena! Come, Sadis’!” As he fumbled beneath his desk and brought up the mandatory bottle of vodka and two glasses, added “and smoke and drink to our survival in these times.”

“Both are welcome, though our times are about to become even more interesting. I want to talk with you about that.”

Fyodor’s hand shook slightly as he poured, splashing liquid on his book. “Arghh!” and Gennadi passed him a handkerchief to wipe it up. “Interesting times! They are already too interesting. With all our socialist republics wandering off, I am reclaiming my Mongol ancestors! At least they lived in safe Siberia!”

“Everyone has ancestors from the Steppes, but it can be said that even the Steppes are in jeopardy. That’s not what I came to talk about, though. I have seen a lot—so have you—and I thought we had reached something of a plateau. But old forces are still around, they are not happy, and I think they mean to take the plateau away.”

And he proceeded to recount the fragments overheard at the Georgian restaurant. “You know who these people are—and there are probably more. And Mikhail Sergeyevich is off in the Crimea as if to say, ‘I don’t want to be identified with what happens.’”

“Yazov? Gavno on [he’s a shit]! Kryuchkov is a scorpion—like Dostoyevsky’s Gazin, who delights in cutting up children. But these–you say—betrayers of the Motherland, this prison crew of monsters, usually don’t talk about such things in public places. They go to a safe house which, of course, is wired by the KGB.” Fyodor guffawed himself into a fit of coughing. “So imagine that they were outlining the plot of a television drama! Either that or they were improvising—which makes for a television comedy.”

“They were stinking drunk.”

“So there are two plots. One to handcuff Mikhail Sergeyevich at his dacha in Foros, the other to declare a state of emergency, bring in the army, take over the government, and plunge us back into the dark ages of Josef Vissarionovich” . . .a poignant pause. . . “which we all loved so well.”

“These plots were hatched from the same egg.”

“Assume this is not television and answer honestly.” Fyodor plunged his glass of vodka down on the desk: “will there really be radical change if they succeed?”

“You don’t turn the wheel of an ocean liner sharply,” Gennadi shook his head while rubbing a pained knee, “That is one credit for the captaincy of Mikhail Sergeyovich: the ship has been in a broad arc for five years. At the same time, he tries to satisfy officers and crew by telling them the destination has not changed. And they will not give up either their stations or the false religion of their navigation assumptions. I saw it all around me at Gosplan. “

“But we were serfs under the Czars and slaves under Stalin, and it seemed to be acceptable as the Russian character as the ship sailed straight at the hands of the rodents who succeeded Stalin . . .”

“We have many traits.”

Fyodor coughed again and washed it down with the water of the Steppes: “Yes, they all came together to help us survive and win the Great Patriotic War. I still have my wound from Smolensk, my feet are still frozen from Stalingrad, and I still smell the smoke of burning tanks and the mocha [piss] of the trenches. But after that victory, the traits came apart, and it took only 40 more years for them to reassemble. We see it now: the labor collectives have gone one way, the entrepreneurs have gone another; factories have been abandoned, street sellers have multiplied; and the Soviet order in Lubyanka and the Kremlin to which your captain, Mikhail Sergeyovich bowed, is desperate to stay on board. As the ship sailed straight on, they told everyone their state would provide, that everything was free. But the only place where you ever found something free was a myshelovka [mouse trap].”

“Dear Uncle Fyodor, you are not addressing my question.”

“Then I assume the fragments you heard were not the plan for television drama. They will not succeed, for no one will any more tolerate gulag operations, no one will tolerate blatant lies even if nothing is free, and if it appears that they came back into control, the momentum of the ship’s broad arc will take that control away.” He smiled so broadly that the sagging flesh of his cheeks tightened to adolescence. “I am so happy you visited today, as my old words would otherwise be spoken only to walls and flowers.”

A ride on the edges of history, with all its unanticipated connections, from the 1963 March on Washington to the 1993 chaos of Yeltsin’s Russia. When an ex-CIA agent convinces a bumbling law student to write a term paper on international rights on the high seas, the student and his roommates in Washington wind up with the whole Soviet Embassy coming to dinner. This happened on August 10, 1963, and has never been marked in the history books. Out of this encounter spins a story of revenge, counterpoint, and rollicking foolishness, ending on a railroad platform by the Russian-Finnish border in September, 1993. The Russian Embassy Party follows its sort-of-ordinary people in a not-so-ordinary web through the edges of history (the set for ‘I Have a Dream,’ watching the fall of the Berlin Wall, revelations of the Katyn Forest Massacre, the last gasp failed Soviet coup of August 1991, stumbling attempts to shore up democracy in Yelstin’s Russia) until . . . Well, let’s say only that there is a good dose of history in the story, and a larger dose of realism in the minds, environments, and conversations of both American and Russian protagonists and supporting cast. At the same time, the echoes of the 1963 Russian Embassy Party itself (when the students behaved and talked like the late-adolescents they were) cut veins through the story, linking its participants in ways they realize, bit by bit, as adults.

Cliff Adelman started making trouble in grade school in the Boston area, made it constructive trouble at Brown and the University of Chicago, and brought the construction to a head in a string of influential monographs that demonstrated how tractable and smart both governments and foundations can be. Not exactly a wall-flower.