Suppression of the Muslims 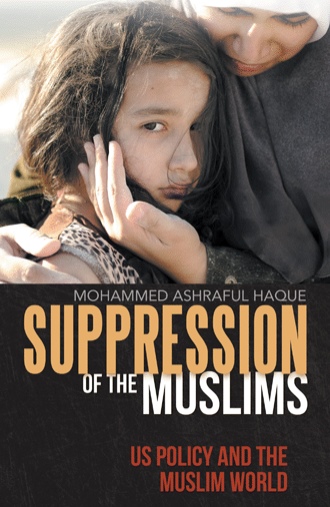 The book discusses from a historical viewpoint,the hypocritical U.S.policy towards the Muslim countries,and how that affects Muslims perception of the west.

From a historical viewpoint, this political science study considers the hypocritical US policies toward Muslim countries and the ways in which they affect Muslims perception of the West.

Islam is a religion of peace, but all over the world Muslims are often portrayed as terrorists. In Suppression of the Muslims, author Mohammed Ashraful Haque offers a consideration of the tense relationship between the United States and the Muslim world.

He discusses, from a historical and political viewpoint, the hypocritical US policies toward Muslim countries, demonstrating the ways in which they affect Muslims perception of the West. Haque argues that the US policy has always been an attempt to weaken the Muslim countries. Suppression of the Muslims analyzes his theory against the backdrop of:

- The misunderstanding between Islam and the West;

- The breaking up of Pakistan;

- The emergence of Bangladesh; and

Haque provides an explanation of the background of Islam and Muslims and considers the ways in which they are often misunderstood and unfairly persecuted because of their beliefs, along with how this plays out in the rest of the world, especially the United States.

I was born on July 9th. 1953 in what was East Pakistan (now Bangladesh). I began my education at Lakeview Preparatory School an English Medium school. My early childhood was spent at Kapasia, Joydevpur, Kaliakor and finally Dhaka. After 2 years at Lakeview preparatory school I transferred to a Bengali Medium school known as New Paltan line high school after that I transferred to West end High school. I finished my sixth grade at west end high school and then I was admitted to Ayub Cadet College in Rajshahi, East Pakistan. This was a boarding school which specifically prepared students to eventually join the defense forces. I have completed 10th grade at Ayub Cadet college and taken the secondary school certificate exam in April of 1970, I was placed in the first division.

After that civil war broke out and there was struggle for the free country of Bangladesh. At the age of 19 I was trained and joined the Liberation Army of Bangladesh. After Bangladesh became independent I transferred to Notre Dame College in Dhaka.

In 1972 I was suddenly put in jail, because I was accused by the Indian Ambassador to Bangladesh to have raped and killed an Indian Woman. While I was in Jail the case never went to court and I was tried in absentia and ordered to be hanged till death. But the day before I was supposed to be hanged, the Prime Minister of Bangladesh Sheikh Mujibur Rahman ordered to free me because of lack of evidence and because the case never went to court. After my release from Jail I took the Higher Secondary School Certificate Exam and I was placed in the second division. After my H.S.C. exam I was admitted at Dhaka University in the department of Public Administration. At the same time I applied in the Army to join Army commissioned officers. I was selected in the Army. Just before my departure for Army Academy I met a missionary who used to work for Mennonite Central Committee, his name was Ken Koehn. He offered to help me to come to the United States for higher education. I was interested and applied for admission in the United States college. I was accepted at Bethel College in North Newton, Kansas. Mr. Maynard Shelly, who also worked for Mennonite central committee wrote a letter of recommendation to Bethel College about my English Proficiency. So I did no have to take the Toefl or Sat. I arrived at Bethel College on 5th September 1973 at the age of 20. I completed my undergraduate education at Bethel College majoring in Economics and Business Administration in August of 1976. During my school year I worked Part time at a construction firm, Prestressed Concrete and I was also a waiter at a Ramada Inn restaurant. After that I completed My MBA from Ball State University in Muncie, Indiana. After completing My MBA in August of 1978, I taught for four years at Manchester College in North Manchester, Indiana. After that I was admitted at the Doctoral program at Mississippi State University. I received my DBA majoring in Finance and minoring in quantitative analysis and Economics in December of 1985. I was appointed as Assistant professor of Finance at Pittsburg State University in Pittsburg, Kansas from January 1985 till June 1987. After that I looked for employment in Bangladesh and was frequent traveler between Bangladesh and U.S.A till August of 1993. I taught at Illinois College in Jacksonville, Illinois till May of 1998. From June 1998 till May of 2001 I taught at North South University in Dhaka, Bangladesh. I returned to the United States and got employment at Texas A&M University-Texarkana and continue to teach both undergraduate and graduate courses in Finance. Writing this short book about the Muslim World and the CIA is my attempt to bring before the American people, the truth which they should know, and judge for themselves whether it is fair to consider Muslims as terrorists as portrayed by the media and the American Government.