Finding a Way through Cancer, Dying, and Widowhood 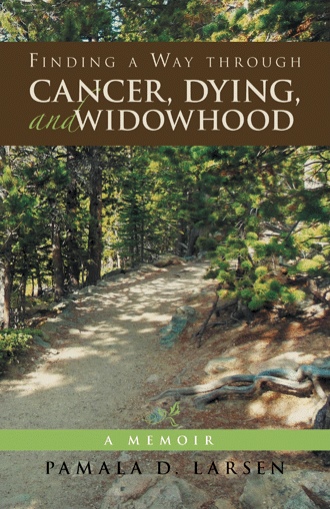 Cancer. It’s esophageal cancer, Stage IIIB. There’s been no mistake. The pathology report has not been confused with someone else’s. Randy has cancer. We sit quietly in the oncologist’s office, Randy, son Brett and I. No one says a word. There are no words to speak, no questions that we need answered now. We are stunned. We had a normal life before…before cancer.

During those first few months, there was much disbelief for both of us. It’s hard to incorporate cancer, an unwanted visitor into your life. But maybe denial/disbelief has a protective role to help you get through the tough spots. We tried to focus on the power of knowledge as some kind of control for us, even though our lives were spiraling out of control. Do we have all of the facts? Do we understand what was said at the last appointment? Should we seek a second opinion?

People ask you, what can I do for you, and you say nothing because all you want is to have the cancer go away. Everything else is insignificant.

From the first appointment with the oncologist, I kept another journal to record Randy’s doctor visits, his medications, his weight, tube feedings, his oral intake, everything ‘medical’ until the day of his death. These medical journal entries were quite detailed. I believed that if I had all of the details on paper, then perhaps I could make sense of what was going on. Maybe I could problem solve an issue. Maybe I could figure things out. Always maybes.

Randy’s doctors believed that the tumor had been growing for at least a year. Were there signs along the way that both of us should have recognized? Randy had had heartburn since his twenties. What if he had been diagnosed 6 months earlier? Would that have made a difference? Would he be alive today?

Two major surgeries within a nine-week period. Overwhelming for both of us. The June surgery and complications made the esophagectomy seem like a walk in the park. Randy remembered

being dropped off at the curb of the emergency room in June while I went to find a parking place, but remembers nothing of those nightmare days except the last couple of days on the surgical floor. I’m thankful he remembers little.

After those couple of months, we began to be afraid to make plans. We often felt like we were prisoners in our own house. Even though we had always been homebodies, we were hesitant to go anywhere. We were going through the motions of life, trying to be optimistic, but waiting for the other shoe to drop.

Like other nurses, I often though I knew what a family was going through with cancer or other chronic illnesses. I thought I knew, but I didn’t. Susan Sontag talks about ‘that other place.’ She writes, “Illness is the night-side of life, there is a kingdom of the well and a kingdom of the sick, and that eventually everyone is obligated, at least for a spell, to identify ourselves as citizens of that other place.”

We advocate that an illness shouldn’t take over an individual’s life, that the individual is more than the illness. But in reality, one’s life is often one’s illness. Life revolves around doctor appointments, tests, how many times you’ve vomited today, fatigue, IV antibiotics for an infection somewhere, and so it goes. Hospitalizations become a blur as to what happened when. That other place. I didn’t know until now.

As an expert in chronic illness, author Pamala D. Larsen thought she understood what her patients and families with chronic illness were experiencing. When her husband, Randy, was diagnosed with esophageal cancer, however, she realized how little she knew. In Finding a Way through Cancer, Dying, and Widowhood: A Memoir, she presents her journal of dealing with her husband’s cancer—from the first day of diagnosis, through eighteen months of illness, hospice care, his death, and her first long year of widowhood.

Providing an honest view of those experiences, Larsen shares thoughts that many people have, but few express. This memoir tells the real story of the pain experienced as a family of caregivers watches the downhill course of a loved one suffering from cancer.

This memoir shares insights and asks difficult questions, telling a common, ordinary story that is acted out every day by thousands of people. It serves to communicate that grief is not an easy road; each survivor must find his or her own answers and path to recovery.

Pamala D. Larsen has been caring for patients with chronic illnesses since becoming a registered nurse in 1969. For twenty-eight years, she has been a professor and administrator in several university schools of nursing. Larsen is coeditor of Chronic Illness: Impact and Intervention. She is retired and lives in Colorado.