Escape from the Belfry 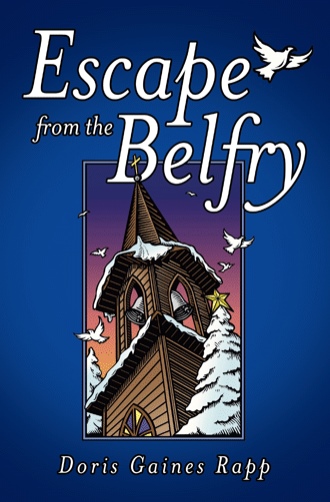 Spirit of the Belfry, make him go away! Adam commanded. The furnace room was hot and he still had his hat and coat on! If he tried to wiggle out of his heavy jacket, he might make enough noise to be discovered. Spirit, help me stay still and silent.

He had slithered into the Cranberry Street Church through the furnace room window he had left unlocked earlier. If he had some place else to go, he wouldn't be there. He listened at the door. He was trapped!

Was the spirit a fantasy? Maybe—but the world of reality was too lonely for Adam to care. So, he listened.

“In time,” the spirit promised. “Everything in time.” And—that’s what Adam needed to hear.

He impatiently watched the janitor, Alfred Gunderman, from the safety of the shadows just inside the furnace room. Mustn’t be found. I can’t rebuild the family’s reputation from inside an orphanage. What would Fritzy think of me then? There aren’t any foundling home kids in Frederica Breman’s family. Fritzy‘s home is near perfect. There will be none in mine either. I won’t allow it.

Farther down the back hall, shadows that belched a heavy, foul air began to move toward the boy. The old man didn’t notice them, but Adam did. They had piercing black eyes as hollow as the hole in his heart. Granny O’Hara said not to look at the shadow people as they pass. Now they were in the church. Up in the belfry, the shadows crept into the corners and hung from the rafters like large black bats.

“Let us deal with the old one,” the shadow people hissed. “We’ll trip him on the stairs. He’ll never come back. Hiss.”

A loud, groaning noise was heard above the building and rattled through Adam’s backbone. The branches of the oak tree out back scraped on the slate roof like the rattling of ghostly chains Adam had heard in a dime movie. He shook off a sickening shudder.

Make him go, Adam demanded again. But he didn’t think the spirit heard him. He didn’t feel the warmth inside himself or sense the heavy presence that usually came upon him before the spirit spoke.

I usually freeze in the belfry. Tonight I get to boil.

Adam’s heart pounded. Beads of perspiration dripped in his eyes. It made him mad.

If I stand here any longer, my skin will singe. Just add a little hickory smoke and I’ll be done.

“Too cold to hurry outside,” the old man muttered to himself. “Good it’s still early enough for the coal to still be hot in the furnace. It’s warm in here.”

You’ll be fine, Mister, Adam mocked silently. You have a home to go to. Fritzy has a home and a family. I have nothing, no one.

The war that had wrapped around the entire world was over. Most of the troops had come home already. Pops hadn’t, and Moms was in the hospital. Adam’s only companion in the cold, musty belfry was the spirit. If he didn’t have the spirit, he would have no one. Real or imaginary, Adam wanted the spirit to stay. One day he would command the spirit to help him escape from the belfry, and, if the spirit wouldn’t, Adam would look at the shadows.

If he were in the glen, he could ask Mr. O’Shaughnessy for help, but the belfry was far from Granny’s place and the funny little man in green. Granny had said, if you caught the leprechaun, he could be persuaded to help. However, O’Shaughnessy would not drive away the man who kept Adam from his bed. The wee one would only play tricks on the old guy, like he did the time he kept hiding Granny's garden gloves. She had to leave two cookies on a saucer on the windowsill near the back door before he would leave the gloves alone.

Maybe none of it was real, including the spirit. But, Adam chose to believe in fantasy rather than face the real world. Suddenly, through his thick black leather clodhoppers, he felt his foot stab with pain and tingle. Then it went completely numb.

That’s just great! What else can happen? Adam shifted to the other foot and nearly lost his balance. If he toppled over, the noise would betray him.

Through the far window, he saw sleet assault the pane and force its way through the tiny space between the glass and the frame. That image didn’t cool him, however. He was still nearly scorched. Suddenly—

Adam watched Alfred pause and listen as he peered from the darkness. He hears me. He knows I’m here. Adam winced. I must not be found. He thought about his stash of comic books. Why can’t I have super human powers? I could be invisible.

The heat from the furnace steamed around the door casing. I can’t stand this anymore. I have to move! The tall, lanky teen eyed the exit sign on the other side of the building.

“Spirit of the Belfry, make me invisible,” he whispered into the darkness all around him. Adam felt warm again, not furnace room warm, but as if someone stood so near he could feel the closeness of him. A presence of power filled the boy, all the way from his heart to his shoe laces.

The boy slipped from his hiding place and made a silent dash toward the outside door. He cringed. His high-top, steel-plated clodhoppers might tap on the painted concrete floor. As he ran, he heard nothing. The spirit had created the silence he had commanded.

Mr. G. turned with a start. “Who’s there?” he shouted into the dark area of the room.

As the boy darted past the closed windows, a pale light beamed through and revealed his slim figure.

Adam said nothing and silently burst across the room with more speed than he knew he could muster. I can’t get caught. If they catch me, it’s all over. He could see the outline of the outside door ahead and gave one last burst of speed.

“Where did that kid go?” Alfred Gunderman mumbled.

The outer door flew open, and Adam sailed out into the frosty air. He could hear the man huff and puff behind him as the old one’s step quickened before the latch set.

“I want to see this scalawag.”

By the time Adam heard the outside door fly open again, he had managed to clear all but his left clodhopper as he slipped in the snow and sludge and rounded the corner. Adam stopped in the darkness under a tree, looked around the trunk and back at the church. The old man was shaking his head.

“I bet those steel-plated shoes are soaked now. Your leather soles might be protected but the metal could rust,” Alfred shouted after him.

“Sorry. Bless him, God,” Adam heard the old man say. “Keep him safe and warm in this awful storm. I don’t want to wish ill will on any of your children. The kid looks terrible thin.”

The year is 1945. The horrible war that wrapped the world in torment has come to an end—yet the torment of young Adam Shoemaker lives on. His father never came back from battle, and his mother is in the hospital with tuberculosis. Homeless, Adam seeks shelter in the Cranberry Street Church belfry … but Adam is not alone.

The belfry is inhabited by strange spirits. One spirit seems to wish good on others, while the demonic shadows mean only harm. Adam hears them both; they whisper to him and give him power. When thieves break into the church one night, Adam is the only witness, but by revealing himself, he would expose his only home.

Adam has a choice. He can listen to the spirit of the belfry and get his family back, or he can side with the shadow beings, who promise justice to the thieves and power he never imagined. Adam feels as though he is being watched, but with the help of new friends, he stays hidden as he fights to decide who he will call on for help. Will he side with the light or the darkness?

Doris Gaines Rapp is a writer by birth and a psychologist and teacher by education. She lives in Indiana with her family.