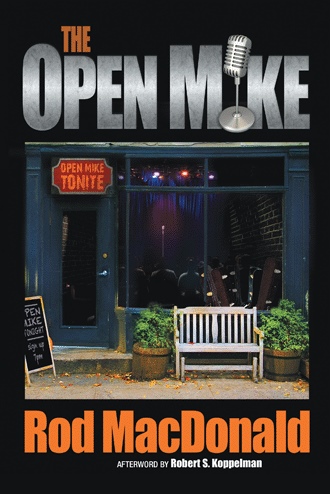 He crossed the street and reached the club in a few steps. There was a small window to the left, as he turned through the open door into a narrow passageway that made a second turn through two swinging doors. It was a clumsy entrance for a guitar case, and he whacked one door loudly as he passed through; the murmur of conversation inside suddenly ceased A roomful of strangers looked toward him, mostly young men standing over a field of black, brown, baby blue, white, and even red guitar cases, so that walking forward required stepping over their characteristic shapes, round at one end, narrow at the other, propped against the wall or flat on the floor, handles facing out and ready.

He picked his way, step by step, across the floor to the bar, where a blond, mustached man in wire-rimmed glasses sat watching him, a clipboard balanced on his knee.

“Let me guess, you want to play the open mike,” he greeted Reo.

A voice sounded from behind the bar; and older man, wearing a white shirt and glasses, stood there cleaning a glass with a cloth towel.

“Oh, another subway prophet,” the blond man nodded knowingly. He looked at Tony, who looked back at him and continued rubbing the glass with the towel.

“Okay, but that’s a the last,” Tony smiled, then turned his back and walked away.

The blond man stood up.

“Reo MacGregor,” he pronounced it carefully.

“Number 30C.” The man smiled, almost sadistically, Reo thought; then, twirling the end of his handlebar, he went into the back room beyond the far end of the bar. Working his way through the wooden chairs and little tables arranged in two large semi-circles facing a stage along the right wall, he came to a desk with a small light bulb glowing over it. Reo watched as he sat behind a metal console, flipped a switch, and began talking through the club’s sound system.

“Okay, music lovers, welcome to the Open Mike. This is your friendly host, Sonoma Sal, and I’m the guy who puts you on, so don’t piss me off. In case you don’t know the drill, you get two songs or eight minutes, that’s it. Talking during someone’s performance is rude, so don’t do it. Tune up out in the bar, and please, be in tune when your name is called. We start with 1A, then 1B, then 1C, all the way to 30C, which, no doubt, will be very, very late. Any questions?”

“You want a beer?” Reo heard someone ask behind him; it was Tony, who stood smiling behind the bar.

“You gotta long a wait.” In the background he heard someone’s name being called, followed by a smattering of applause.

“Sure,” Reo answered, setting down his case. “How long do you think it’ll be?”

Tony smiled, drawing a beer from an ancient metal tap with a black plastic handle.

“Oh, two three, maybe a five hours,” he shrugged. “Who knows? You in a hurry? I see you before somewhere?”

“I was here one night last week.”

“Oh, yeah, those a boys bring a good crowd,” Tony said, settling down the beer. “That’s a dolla. Since a you play. Usually two.”

“Thanks,” he said, opening his wallet, sliding a bill across the bar.

Tony went down the bar and Reo studied the scene; the back room and the bar were full of people, mostly young guys in blue jeans and denim jackets. There were only a handful of women in the bar, all either standing with their hand on a man’s arm or in the center of a small circle of men. None of the women, interestingly enough, were talking with each other. One of the women, a willowy blonde with shoulder-length hair, stood surrounded by at least six men, who were all laughing at something she said; but when she finished, five of them deferred to the man next to her, a man in his mid-twenties, Reo guessed, which seemed five or six years older than the young woman. Running his hand over a head of sandy-colored hair, he made a comment that made all the men laugh, just as she looked across the room straight into Reo’s eyes. He started to look away, but she smiled, somehow conveying a hello without any of her companions noticing, before returning to their conversation.

He counted the guitar cases; in the bar there were twenty-seven, and in the back room, where the crowd was at least paying attention, he could see fifteen. There were seven blue cases with the word Martin embossed in the side, advertising that its owner was a serious guitarist, or at least owned a serious guitar. Most cases were black and nondescript, except for the gleaming white one leaning on the wall behind the crowd surrounding the blonde woman. Forty-two cases, he added up, and he was last with number 30C, the ninetieth performer on the list. At two songs or eight minutes, there was the theoretical possibility he could wait twelve hours to play.

The first performer finished; Reo had barely heard him. What if no one listened when he played? He grabbed his case and went into the back room, moving behind the main body of seats until he found an open spot on the vinyl bench at the back wall. He rested the guitar against the seat and sat down, banging his head against a framed photograph behind him.

“Ah, the past rears its ugly head,” a round voice spoke from the next seat. “Don’t worry, that photo has probably been there twenty years, if you broke it you’d be doing everyone a favor.”

“For what?” The speaker reached across and tilted the frame so he could look at it.

Reo looked around the room; the walls were dotted with similar framed photographs.

“Is that what all these photos are? People who played here?”

“This is the folk museum,” the man smiled, holding out a hand. “Ted. Imbonanti.”

“That’s my name. Ted Imbonanti.” This time he emphasized the third syllable.

“Reo. Reo MacGregor,” he answered, shaking the hand. Ted released it, then reached down and picked up a pack of cigarettes.

“Oh, great. I remember mine. Two months ago. What do you think?”

Ever wonder what it would be like to give it all up and head to Greenwich Village to become a singer-songwriter? In Reo MacGregor’s eyes, his law degree represents a spiritual and aesthetic dead end. He leaves it all behind to follow his music to lower Manhattan’s answer to Paris’s Rive Gauche. There, he enters the bohemian scene of The Open Mike, where a new generation of singer-songwriters meets to sing for, and sometimes about, each other. At first alone amid the sea of guitar cases, he’s inspired by the café’s fellow performers and sirens. Homeless and broke, he struggles to honor his calling. For Reo, survival means chasing burglars down the fire escape, recording sessions uptown with one of New York’s major record producers, or hanging out on the Village’s famed MacDougal Street. But first, he has to earn the respect of the audience. “Rod MacDonald paid his dues in the coffeehouses of Greenwich Village during the 1970s and early ‘80s, and has caught the feel of the time and place in his new novel. For anyone who was in that place and time, it brings back memories vividly. For anyone who wasn’t there, his writing gives a taste of what it was like.” —David Bromberg

Rod MacDonald has engaged national and international audiences for nearly four decades with his concert performance and contemporary topical and lyrical songwriting. The Open Mike is his first published novel. He currently resides in South Florida. Robert S. Koppelman is Senior Professor of English at Broward College in Fort Lauderdale, Florida. He performs his own songs at open mikes in Greenwich Village and South Florida.