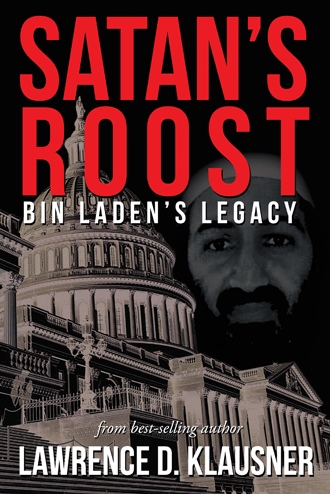 The memo originated from IDF Electronic Surveillance in Jerusalem to the Mossad. It related a “quick transmission” interception originating in eastern Afghanistan and routed through Tehran to a site in the United States. The second page was the Mossad’s translation, hand delivered to Israeli Prime Minister Kaplan twelve hours after its origination. Al-Qaeda was compromised!

The Jews knew that the FBI could not act quickly enough so they gambled. The Mossad accomplished what it feared the Americans would not.

All three men fully understood the ramifications of the Zionist gamble. America was now bound to come to Israel’s defense under any threatening circumstances. The Jews had, as they say, an ace in the hole.

“So my friend, we do have an operative within the Mossad after all?”

“Doctor, we cannot tell even you for to do so would jeopardize his very existence.”

The leader was about to object then stopped knowing the mullahs were right. “I understand.” He turned his eyes upward, “I will pray for his safety. In the Name of Allah, the Compassionate, the Merciful. Did your man tell you how the Zionists accomplished this? How they found our man and…?”

“Disposed of him and the virus?”

“The killing of our martyr is evident. We have no knowledge of how he disposed of the chemical agent. One thing is certain; it is lost to us… past history.”

“But, how? Such knowledge could be of great importance!”

“What I do know is that the killing and the weapon’s destruction was accomplished by a single individual; a well-paid professional, a mercenary.”

The sound of Arabic music ran from rock wall to rock wall. Al-Zawahiri closed his eyes revealing deep facial creases. The leader’s thoughts were his and his alone. An idea was materializing, as insidious as it was brilliant. It surfaced in the form of a single question, “Can we find him?”

Without reply, the doctor used his AK-47 to pull himself up. Sitting too long in one position caused old joints to stiffen. Besides, he needed to move while thinking. He slung the weapon across one shoulder and then took slow steps.

The solitary Egyptian doctor walked the damp corridors deep in private thoughts. As he continued, his steps took resolve. He used the time to formulate a sinister plan.

When he returned, he motioned to his guests to join him. As the mullahs came alongside, the guards, seated on their feet in traditional style of nomadic tribes, fell in behind.

In the high country, dusk rapidly overtook day. Already the moon’s brightness was fighting with the last hint of the late afternoon’s blinding sunlight for dominance. The moon would eventually win, but only until the dawn chased earth’s celestial partner from the heavens, a never-ending divine battle.

The trio stopped short of the rocky overhang, the doctor’s eyes drifted upward catching movement in the air currents flowing up and across the ridges. One by one, the others raised their eyes to learn what held the leader’s interest. A solitary male hawk, brown and gold wings spread as some avenging angel, wove long, lazy concentric circles high overhead on the lookout for prey. The bird’s strength and persistence was something Ayman admired. It was as if this feathered creature was versed in the teachings of the Qur’an: Believers, fortify yourselves with patience and prayer. God is with those who are patient.

The bird continued his hunt, and then saw something of interest a thousand feet below. In one instinctive movement, he gathered his wings close to his body and plummeted toward the seemingly barren landscape. At the final moment, his feathers flashed out, and with talons extended, he struck. The predator’s attack was deadly, quick, and final! Then in a single practiced motion, the hawk flew off with his prize. It was a game of life and death; everything was a game of life and death. In the end, there could be but one victor.

When al-Zawahiri finally spoke, both mullahs knew the thought process had played out. The doctor drew the men near, one on each side, and then whispered, “As I asked, would it be possible to find, to make contact with, this man—the mercenary?”

Abdul answered, “It may be possible.”

The Mullah Omar interjected, “Then we will kill him!”

The doctor’s arm grasped his friend’s shoulders, his eyes flashed, “No! We will not find and kill him; rather we will find and hire him!”

“To do what jihadists do, my friend. By the Will of Allah, destroy our enemies!” The doctor released his grip, his head nodding imperceptibly, his smile sinfully joyful. He had the perfect plan―simple, clean, unstoppable. As he turned back, his lips formed, “All Praise to Allah.”

A quick cold wind carrying the pungent smell of death invaded the space causing all present, save one, to draw their woolen garments tight against what they could not see. Ayman al-Zawahiri breathed the wintry scent into his nostrils. To him it was not the smell of death rather the sweet scent of success. He would accomplish what his friend Osama had not, The Final Solution of the America problem.

FBI Assistant Director Mark Goldman, a former NYCPD detective, had only to sign his letter of resignation when two unlikely events change the course of his actions. The murder of a postman and a car fire near the Washington Mall become the first pieces of a deadly international conundrum for Goldman—the impetus he desperately needs to get back on the streets.

Years earlier, Mark accepted a promotion to his current, lofty position; an award for thwarting a devastating terrorist attack on the homeland. His title suggests he is the liaison between U.S. and foreign security forces; however, none of his proposals are executed. The Jewish prodigy is caught in a dead-end job until now.

Goldman ignores his jurisdiction to search for the lone wolf whose mission is to destroy the very foundation of the U.S. government: the order of succession to the presidency. The hunt draws in Avi Levy, the director of Israel’s Mossad; as well as Mark’s mentor, Jack Warner, a retired FBI director. The case also reunites Goldman with the love of his life, Ruth Sachs, a distinguished Mossad agent.

The tale courses from the streets of Paris, to the Zuiderzee, and finally to the U.S. where the lone wolf blends into the anonymity offered by the sheer vastness of the land. Will the al Qaeda-financed lone wolf remain a step ahead of his pursuers, or will the reunited team of Goldman and Sachs eliminate the threat? America’s fate hangs in the balance.

The Secret Service was so intrigued with this story that it requested an interview with the author. The idea of a lone wolf eradicating the nation’s entire political structure in a single blow was unthinkable. Possibly because of that interview, four similar plots against our homeland were thwarted. All too often a fine line separates fact from fiction.

LAWRENCE KLAUSNER is the best-selling author of Son of Sam, and three novels, Conclave, Hail to the Chief, and One Million Carats. Lawrence has been a scriptwriter for a variety of TV dramas and miniseries. He now spends the bulk of his time as an international travel consultant and lecturer traversing the globe in search of historical facts and locations to incorporate into other fictional plots of international intrigue. Lawrence’s fascination with current global geo-political reality has led to associations with federal and local law enforcement resulting in the apprehensions of a score of individuals bent upon destroying America’s way of life.