Dinner at the Capital 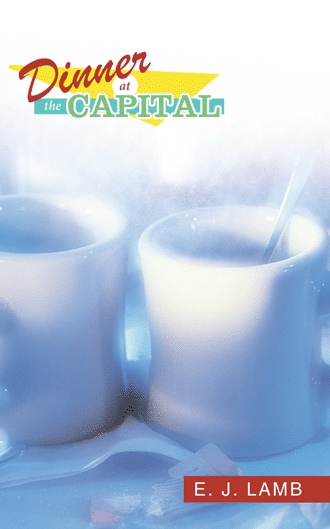 As the sun was setting, Jessie arrived home from a long exhausting day at the limestone quarry.

Jessie was a slightly over-weight middle-aged woman of average height. The 48 years that life has thrown at her has been challenging and rewarding at the same time. With a limited education, she found enough success to allow her family to live comfortably. She failed out of college after the second year and that is when she went to work at Hillside Limestone Quarry.

She started working as an administrative assistant for the owner of the quarry, Mr. McGreary. He was an older gentleman with no family who had put his whole life into the quarry. He had built the quarry business up from nothing. He started with a small backhoe loader and a piece of “wasteland” that he bought at an estate auction. The quarry meant everything to him. People offered to buy the quarry from him on numerous occasions. Seeing that the quarry was all that he had, Mr. McGreary would not sell the business.

As his assistant, Jessie always arrived early to work and left late, making sure all work was correct and complete at the end of each day. As the time past, Mr. McGreary observed her dedication to secretarial work and began giving her more responsibility. He mentored her on the business, everything from labor relations to budgeting. He believed in treating people well and always working with balanced financial books. After about a year or two Jessie found her responsibilities had increased to the point where she could do every little task within the company.

Ten years after Jessie started working at the quarry, Mr. McGreary came down with lung cancer which put him in the hospital for about two months for treatment. During this time in the hospital, he named Jessie the President and Chief Operating Officer of Hillside Limestone Quarry because she was the only one he knew would operate the business to his high level of expectations. He also knew that she loved the quarry as much as him. Upon returning back to work, Mr. McGreary took a passive role in the business since Jessie was doing such a remarkable job. He still came to work but he consulted her on almost all business decisions.

About two years later Mr. McGreary finally died from lung cancer. In his Last Will and Testament, he named Jessie the owner of Hillside Limestone Quarry. Jessie was devastated with his death and vowed to make the quarry the best quarry ever in honor of Mr. McGreary.

Three years had passed and Hillside Limestone Quarry net profit had more than tripled since Jessie started 15 years earlier. She had purchased the adjacent property to grow the business. The business was named one of the top 100 employers in the state of West Virginia by the state’s Labor Board. Looking back to some of her college professors who had failed her, she sat in amazement that she had become so successful and it was due to the generosity and faithfulness of Mr. Greary. The man who gave her a chance after the university gave up on her.

On a cool November day, Jessie arrived home at dusk. Her day consisted of so many different struggles. First thing that she had to handle was declining production reports due to equipment downtime. The equipment was aging and therefore maintenance costs were on the rise and the time between repairs was shorter. After the procurement of new property, the cost of new equipment seemed a little too much at this time but something needed to be done. Therefore she contacted a local maintenance and repair company to set up a contract for monthly preventative maintenance to reduce downtime and increase productivity. This complex contract with stringent requirements and surcharges was costly but still less overall when compared to the cost of all new equipment. Also, over the coming years, the fleet of equipment would be replaced with new equipment.

Later she attended an investor meeting where she had to sell the idea of investing in limestone to people who had money but did not necessarily understand the business. Fifteen years ago, Jessie was like those investors with little to no knowledge of how to run a business, let alone a quarry. Plus, limestone return on investment is not as high as other aggregate and minerals. Selling the low profit of limestone to people that wanted to make a quick buck was both physically and mentally challenging. A thirty minute quiet lunch in her office helped to replenish some of the energy that the events from that morning had drained from her.

During the afternoon, she interviewed for an assistant who must meet her high level of expectations. There were three applicants and they all seemed sub-par to her. She tried to remember what it was like when she first interviewed but the up and coming generation did not seem to have the same focus or sense of urgency that she did fifteen years ago. She needed an assistant but she did not need someone that would end up causing her more work from all their mistakes. Not satisfied with any of the applicants, she decided to keep looking.

Scattered throughout the day, Jessie had to deal with employees and excuses about arriving late to work, leaving early, or just not doing their job. It seems that when you interview people for a job, they tell you how much they want the job and how hard they are going to work. After about 3 - 4 months, those same individual are showing up hung over, barely able to operate the machinery due to their hung-over pounding heads. They take breaks that are twice the length that they should be. When they are addressed about these issues, they have every excuse in the book. Jessie is nice and tries to overlook the inferior qualities of people, knowing that no one is perfect. But at the end of the day if the poor personality traits cost the company money, then she has to reprimand or worse, dismiss the individual. Today she only had to a reprimand one employee but if they do not straighten out their situation, she could foresee having to dismiss the guy. This was probably one of the hardest parts of the job, dealing with human emotions and realizing that you could cause hardship and heartaches to a man, his wife, and children. No other part of the job was more mentally taxing than this.

After thirteen hours at the quarry, the mental stress this day was just too much. She did not want to endure the physical stress of cooking and cleaning when she got home. She was drained of energy and enthusiasm. Her body felt like it was ready to collapse.

Her husband of 20 wonderful years, Bernard, had been working at a bicycle shop doing bike repair and maintenance. It was not the highest paying job in the world but it was something that Bernard loved. His time at the shop was flexible and he enjoyed spending his time with other bike enthusiast. The owner allowed Bernard to work a schedule that fit their family’s needs. If the kids needed to leave school early, had a doctors’ appointment, or a field trip, Bernard was there instead of the bike shop.

Life at the bike shop was Bernard’s dream job but he felt a little guilty that Jessie was the main “bread winner” of the family. They did not live life according to traditional family roles. If you knew Jessie, you would understand that she never conformed to a traditional role. Her mom and dad tried to raise her as a proper young lady but they gave up after Jessie refused to stop playing little league baseball in spite of the many bribes her parents used. Stepping out of the normal male / female roles of marriage was not a hard stretch for Jessie. Bernard did not have a big problem with it himself but the questions from his side of the family were the source of most of his guilt.

Forty-eight-year-old Jessie has always faced life’s challenges head-on. She has spent her career helping her boss develop his quarry into a successful enterprise and has been rewarded with the task of running the business. Jessie learns that with all successes, there is sacrifice and pain.

Arriving home from a stress filled day, Jessie’s husband, Bernard, takes her out to dinner. After enter the Capital Diner, Jessie is engulfed with memories that take her on a journey of her life. As the evening and memories unfold, she looks back at small-town America with an open-mind, learning important lessons from her childhood.

As she shares her epiphanies with her husband, she begins a transformation that restores her world – and her outlook on life.

Dinner at the Capital is the poignant tale of one woman’s journey through her past as she discovers the secrets to enlightenment, peace of mind, and true happiness.

E. J. Lamb is a world traveler who has worked for many affluent companies. She resides in central Pennsylvania with her husband and two dogs.