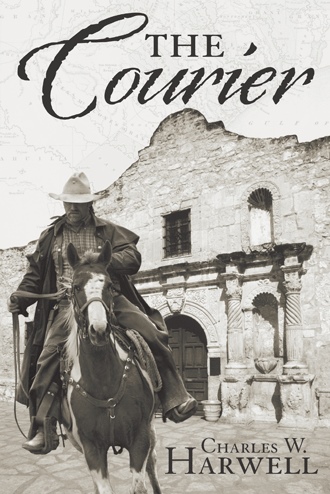 “Let’s go,” Sowell said as he gave the boots a final yank and stood up. He and Bonham began to retrace Bonham’s path across the presidio floor.

When they arrived at Travis’ door, Bonham rapped quietly. “Enter,” came from the other side. Sowell opened the door and Bonham followed him into the cell-like cubicle. “Sorry to disturb you, Andrew.”

This apology came from the corner where Travis had his cot. Sowell and Bonham simultaneously looked in that direction. They saw Bowie propped up on his elbow, reclining on the cot. They gasped in unison, for Bowie hadn’t been out of his room but once for days.

“Stand at ease,” Travis ordered; he assumed that all the men and boys were military when in fact only about 100 of the approximately 200 men in the fort were regular military. The other half were paladins from Tennessee, Kentucky, Georgia, and God knows where. Most of the irregulars were hunter-trappers who made their livelihood by accurate marksmanship and their knowledge of the frontier. Very few of the garrison were farmers from east of the Colorado. Most Anglo-Texans didn’t believe a Mexican army would venture so far from the Rio Grande. In addition to the few Texas regulars and the volunteers who rode with Bowie and Crockett from America, east of the Sabine, there were a few merchants, doctors and lawyers, one of whom was James Butler Bonham from a prominent Carolina family. Bonham now rode as a courier. Some of these volunteers, including Sowell and Bonham had been at the Alamo since its capture the previous December. By Epiphany it was evident that a Mexican army under the command of “The Napoleon of the West,” as the Mexican dictator, Santa Anna, liked to call himself, was advancing north and razing every structure in its path and killing all Anglos.

Travis was hunched over a small table, writing. He finished with a flourish and handed the paper to Bowie. “What do you think?” he asked. Bowie took the sheet, adjusted his position so the lamp illuminated the paper, let his eyes scan the page and then read aloud:

Commandant of the Alamo

“To the People of Texas and all Americans in the World

“I am besieged with a thousand or more of the Mexicans under Santa Anna. I have sustained a continual bombardment and cannonade for 24 hours and have not lost a man. The enemy has demanded surrender at discretion, otherwise the garrison is to be put to the sword if the fort is taken. I have answered the demand with a cannon shot and our flag still waves proudly from the wall. I shall never surrender or retreat. Then I call on you in the name of Liberty, of Patriotism, and everything dear to the American character, to come to our aid with all dispatch. The enemy is receiving reinforcements daily and will no doubt increase to three or four thousand in four or five days. If this call is neglected I am determined to sustain myself as long as possible and die like a soldier who never forgets what is due his honor and that of his country. Victory or death.”

“Well stated,” Bowie concluded. “Do you want me to sign, too”

“I don’t think that is necessary, do you?” Travis deferred the question.

“Not now,” Bowie emphasized the “now.” “If this plea doesn’t move the bastards to act, they’re not patriots and they may not even be humans.”

“Couriers,” Travis spoke in his military voice. “Be prepared to ride at first light.”

“Yessir,” Sowell answered immediately. Bonham cleared his throat and coughed nervously. “Sir,” he finally said, “Just don’t ask me to go to Goliad again. I don’t want to have anything to do with that horse’s arse Fannin.”

Andrew Jackson Sowell was a civilian courier for Colonel William B. Travis, commandant of the Alamo. While a student at Trinity University in San Antonio, I discovered a plaque in the Alamo upon which Sowell was memorialized.

More than fifty years later, I chose Sowell to be the central character in my first novel, The Courier. Sowell’s service during the Texas War for Independence is both exciting and surprising.

Enjoy your ride with him.

Charles W. Harwell is a native Texan and the descendant of a Sowell who secured a land grant in the Republic of Texas. He is a minister with a degree from Princeton Theological Seminary. He taught English at the University of South Alabama in Mobile for thirty-one years. He and his wife currently live in southern Illinois.