Tips for Executives, Managers, and Students to Increase Productivity and Reduce Litigation

by David A. Robinson 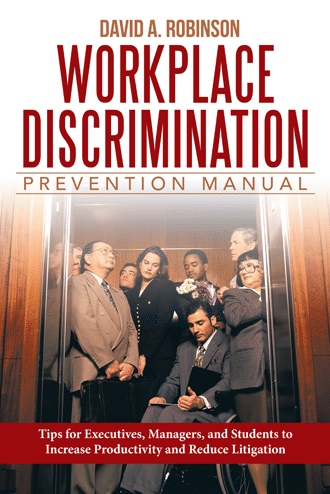 Treat Men and Women the Same

(With a Few Very Minor Exceptions)

Try not to differentiate in any way between men and women in the workplace. Besides referring to a male as “he” or “Mr.” and a female as “she” or “Ms.” (or, if she prefers, “Miss” or “Mrs.”), and besides providing separate restrooms for men and women and allowing men and women to dress differently, try to pretend that all your workers are of the same gender: the “worker” gender. The law says you should treat women and men the same in the workplace unless the woman is pregnant and close to giving birth or has just given birth, in which case she has some rights that men don’t have (see “Pregnancy, Adoption, and Maternity Leave,” page ???? below), or if there is a job that can only be performed by one gender. For example, if you need someone to model women’s clothes, you can restrict your hiring to women for that position. That is called a “bona fide occupational qualification,” or “BFOQ.” Use gender-neutral language in oral and written communication. Don’t call women over the age of 18 “girls.”

The announcement in January 2013 by U.S. Secretary of Defense Leon Panetta that women will now be permitted to serve in combat will, I think, do more to achieve equality for women (equality with men) in the workplace, not just the battlefield, than any other event in U.S. history. With very, very few exceptions, there is no reason to treat women differently than men.

This advice to treat men and women the same might upset some people. After years of trying—successfully—to prove that men and women have equal abilities (except perhaps that the average man has a little more upper-body strength than the average woman has), some people (some women and some men) are now saying that women think, communicate, and manage employees differently than men do.

Employers should ignore such talk. For thousands of years, one major cause of discrimination against women was the belief that women think differently than men. That belief resulted in women earning less than men and being subordinate to men in many types of employment. In the 1970s and ’80s, women rejected that belief. As a result, women made great strides toward achieving full equality with men in the workplace. Today, however, that belief is back in vogue in some circles.

Keep in mind that that belief—the belief that women think, communicate, and manage employees differently than men do—is held and expressed mainly by authors, lecturers, and college professors, not managers. Managers should not hold or express that belief. Managers who express that belief or base their managerial decisions on that belief risk being sued for sex discrimination.

If you are a manager, you should ignore all statements and literature that argue that women think, communicate, or manage differently than men do. Such arguments are generalizations that ignore the fact that not all men are the same and not all women are the same. Moreover, these generalizations are usually based on immeasurable characteristics and anecdotal observations. These generalizations are nothing new. They are as old as time. They have historically hurt women more than helped women in the quest for equality. Examples of such generalizations are: “Women use their instincts and emotional intelligence more than men do. Men just use logic.” “Women prefer working in groups; men prefer working alone.” “Women are less assertive than men.” “Women are more nurturing than men.” “Women are better communicators than men are.” “Men are better negotiators than women are.” “Men don’t ask directions.” “Men don’t cry.” “Men’s brains are ‘hard-wired,’ which makes them less comfortable expressing their emotions.” “Men can only think about one thing at a time; women can think about many things at a time.” “Women think ‘outside the box’ better than men do.”

The people who make such statements mean well. They are trying to empower women. But in fact they are doing the opposite: they are perpetuating old stereotypes about women, such as the stereotype that men use logic more than instinct while women use instinct more than logic. Remember the old stereotype of a woman complaining to her husband, “I hate it when you’re logical”? These people are claiming that that is true: men are too logical. “Men should use less logic and more feelings and intuition, like women do,” these people say. Such statements lead to legal trouble. If a male manager were to say “Men think logically more than women do,” he would be accused of “degrading” and “devaluing” women. He might get sued for sex discrimination. He would be a dead duck in court.

Women managers who talk about how women are better at one thing or another than men are (such as having better “intuition,” “listening skills,” or “communication skills” than men have) risk being sued for sex discrimination by male subordinates and rejected male job applicants. They might even be sued for creating a “hostile work environment” toward men. Women should avoid such talk. Such talk will cause men to file sex discrimination lawsuits.

Men and Women Are Both from Earth

The most important color in the workplace is not black or white, but green. A company’s employment decisions should be based on the bottom line, not on an employee’s skin color, gender, age, ethnicity, or other discriminatory category. Businesses shouldn’t care if an employee is black, white, brown, red, or some other color; they should care how well they perform their job.

- Should supervisors be more lenient with aging and disabled employees than with other employees, or should they treat everyone the same?

- Should employers treat men and women differently, or the same?

David A. Robinson earned a BA in economics from George Washington University in 1974 and a JD from Washington University, St. Louis, Missouri, in 1977. He is a labor and employment lawyer, as well as an adjunct professor and practitioner-in-residence at the University of New Haven (Connecticut) College of Business.