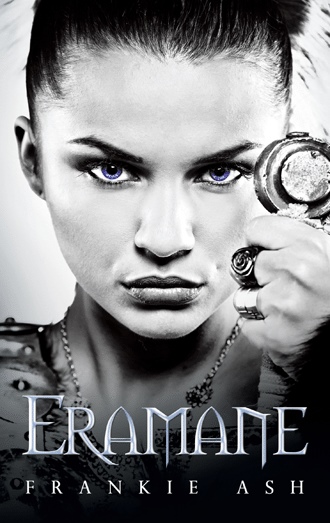 Wind whipped through Kora’s hair as she stood at the edge of the ocean cliff, her dress tattered and torn, legs scratched and bleeding from running through the briar patches in the woods. Normally she would be more careful when passing through the thorn brush, but Kora was desperate, and her life—never mind her legs and dress—meant nothing to her now. Kora’s husband pursued her.
“Kora!” he shouted. “Stop! Please!” he pleaded while trying to reach her.
But Kora did not turn to face him. He ran as fast as he could, each step bringing him closer to his wife. Kora’s husband stretched his arms out, reaching for her as he ran. He called to her again, “Kora!” But it was too late. Swoosh, she was gone. Kora made her choice, the choice to end her life and the life of the monster growing in her womb.

Chapter One: Part One | A Beautiful Young Couple

In the village of Eludwid, seventeen-year-old Eramane Fahnestock goes about her life, cheerfully disregarding a prophecy made to her parents that she would have a great gift. Not yet wed and beset with boredom, Eramane cannot shake the feeling that something exciting awaits her beyond Eludwid. But when she is invited to picnic with a handsome young suitor, Eramane has no idea that her life will soon change forever.
As Eramane prepares for her date, she is suddenly hypnotized by a strange voice that tells her he will be coming for her that night. Unsettled but determined to press forward, Eramane and her suitor, Lebis, head to the woods to enjoy their picnic. As darkness falls on the forest, however, a beast emerges, transforming their beautiful outing into a terrifying scene. Taken captive and carried away to a mountain hideaway, Eramane finds her memories are soon clouded, even as her family frantically searches for her back home.
In this gripping fantasy tale, evil is summoned to the mountaintop, forcing a young woman to discover her magical gifts and exact revenge against a beast determined to destroy everything she has ever loved.

Frankie Ash holds a BA in English with a minor in mass communications. She resides on the East Coast, where she is currently writing the sequel to Eramane.