’Til Death Do Us Part 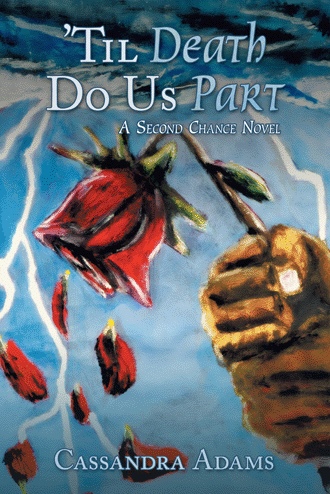 This will be the last time, she thought, shifting the covers from over her and easing out of bed. She slipped into her clothes and took one last glance at what used to be her loving husband before making her way to the nursery where the baby was sleeping. She wrapped her into a little bundle of joy and descended downstairs toward the front door. With baby in arms and the getaway bag swung over her back, she quietly pressed the keys to disable the alarm. The night air was cool against her skin as she huddled the baby close and attempted to walk out into the darkness. Suddenly she felt his presence creeping up from behind. He gripped a fistful of her hair and yanked her toward him.

“Where do you think you’re going, Koty?” His words were filled with hot anger, piercing deep into the core of her heart.

“Get back in here. This is where you belong.” He told her and gave her hair a mighty tug causing her hands to hurl up in agony and the child to fall to the ground like a small sack of raw meat. Dakota fell to her knees trying to soothe the baby’s pain, but Dominique clutched another handful of hair and dragged her out of the baby’s reach and back inside his self-made prison. She screamed for help but no one paid her any mind. She kicked and bit and scratched with every ounce of energy she had; her life depended on it. And then he drew his gun...

“Good morning,” the cheery face nurse strolled into the room waking Dakota from what seemed like a five minute nap. She wore powder blue scrubs and a pair of squeaky white clogs, wheeling her mobile workstation against the bed where Dakota’s lifeless body laid all hooked up to needles and tubes. She tried to steady her rapid heartbeat striking hard against her chest. Unable to move, she scrolled her eyes around the room, relieved that it was just another one of those dream. The nurse walked over to the window and separated the mint green weatherized curtains, causing the sunlight to burn Dakota’s red swollen eyes. “How are you feeling today Mrs. Durham?” She mindlessly asked, adjusting Dakota’s pillow to make her more comfortable. “Does it hurt to talk?” Dakota nodded in pain. “Well that’s okay. I completely understand.” The nurse was sympathetic, ripping a fresh syringe from its package. Dakota flinched at the flow of cold water that stung through her hand while the nurse squeezed the fluid through the small tube leading to a needle poked inside of her vein. “I know it stinks to flush your veins, but I promise you that the discomfort won’t last for long.” She quickly inspected the tubes for any signs of backup drainage and then she checked her temperature again for about the fifth time in the last twenty-four hours. “Hmm, that temperature just won’t break.” She said before running a few other necessary vitals then administering another dose of medication into her IV. “The doctor will be in shortly.” She told her before leaving the room. Dakota closed her eyes wondering if the cheerful nurse truly understood her situation.

“Good afternoon Mrs. Durham, I’m Doctor Koziac.” The short bald man approached her bedside wearing a three quarter’s length doctor’s coat with his name neatly sewn into the fabric over a pocket full of pens. His voice startled her after dozing off again from the dose of medication the nurse had given her. “There are a few things I’d like to discuss with you.” He stood over her bed, stuffing his thick hands in the front pockets of his coat. His eyes showed compassion as he went on. “All of your vitals seem to be fine.” He stated. “However I am concerned about your elevated blood pressure and that persistent fever that just won’t break. Perhaps it could be due to the tremendous stress you’ve endured.”

He pulled a clipboard from underneath his arm and let out a heavy sigh. A sense of humiliation came over her as if she could read his thoughts. It was only a matter of time before things would end up this way. There had been far too many visits revealing her previous accidents of bumps and bruises that can only be identified as domestic violence disputes. This time it was dangerous. She suffered several gunshot wounds, and not to mention, a broken collar bone, blackened eye and she had even put her unborn child in harm’s way. “I was able to retrieve all but one of the bullets that’s lodged deep in your chest. Due to the massive swelling, I didn’t want to risk puncturing the lungs. That can cause further complications.” His eyes scanned over the chart again. “By the way, I’d like to have you stay a few more nights for observation.” He insisted without taking his eyes from the clipboard. “I want to keep a close watch on that temperature.” He told her. “If everything goes well by next week you’ll be free to go home.”

“Ma… ba… be,” Dakota struggled with her words, but Doctor Koziac caught on right away. He dropped his eyes in sadness. “I’m sorry Mrs. Durham but your unborn child just wasn’t strong enough to pull through.” He waited for her reaction, but there were no words to express the griping pain that was ripping through her heart. “We did all we could do to save her.” He placed his hand on her shoulder and watched the tears roll down her face, “I’m terribly sorry.” He said, and quietly walked away.

Stevie’s manly hands tapped at Dakota’s bedroom door and in mere seconds he invited himself in before she could utter a word.

“Well, come on in why don’t you.” She rolled her eyes and sucked her teeth.

“I don’t mind if I do.” He flopped down in a chair across from her bed where she sat bent over one knee polishing her toenails. “So I heard you’re going to Columbia after graduation.”

“And you heard right,” She replied brushing the crimson red polish down the middle of her nail without lifting an eye. Dakota worked hard toward her full scholarship admission and was excited about leaving home to live in New York. She plans to attend the fall semester in a few weeks, majoring in journalism, slash public relations, that’s how she likes to describe it.

“You’ve always wanted to be a reporter,” Stevie shook his head, chuckling at his own thoughts.

“Do you remember how you used to hold that stupid hair brush up in my face pretending to interview me?”

“Yea, you were the basketball star that everyone wanted to sign.” She laughed. “Man, those were the good old days.” She stopped and thought about how their father lost his job and soon after developed a drinking habit that ruined their happy home. He’d come in most nights intoxicated stumbling over things and then pass out, but then there are other times he’d come in blaming their mother for everything that didn’t go his way and become extremely abusive toward her. “Stevie, you just don’t know how bad I want to leave this place.” She turned back to polishing her nails and then her eyes caught the sadness in his. She sat up straight and cupped a hand over her mouth. “I’m sorry. Here I am selfishly glorifying about getting away from my distressful life here without even considering you and mama. You just don’t know how I wish I could take you both with me.”

“Don’t sweat it. Everything’s going to be aw’ight. Besides, I can hold down my own, and no matter what mama says, old Mr. Lewis will be dealt with the next time he put his hands on her.” Stevie had stopped calling him dad the first time he saw him chastise his mother. Besides I got to fulfill my own dreams.” He flicked the collar of his shirt. “You know I’m an up and coming basketball star.”

“Up and coming my foot. You better hope you get into somebody’s college ‘cause the way I see it, your life is going to spiral downhill real fast hanging around that crew of yours.”

Dakota Lewis is determined to never live the same life as her mother—a sheltered housewife mistreated by her abusive husband. As she heads off to Columbia University on a full scholarship, Dakota is excited to begin a new life inspired by her love of God.

Two years later, Dakota gets involved with Rakiem Bennett, a martial artist with a heart of gold and a dream of one day managing a dojo that will provide an escape for at-risk children. But Dakota sees other plans for their future, setting off a series of disagreements that prompts her to doubt their relationship.

As she battles her own problems and worsening family burdens, Dakota’s prayers are left unanswered, leaving her to question her faith in God. She then meets Dominique, a successful entrepreneur who quickly sweeps her off her feet—and discovers Rakiem’s infidelity, leading her to choose Dominique as her life partner. But it is not long before Dakota finds herself in the midst of her worst fear: trapped in an abusive marriage, just like her mother.

In this emotional tale, a woman desperate to escape her madness must learn to rely on her faith and inner strength to break a cycle of abuse as she seek her true destiny.

Cassandra Adams studied at Columbia College Chicago and enjoys using her writing skills to enlighten and entertain. She resides in Chicago with her husband, daughter, two sons, and her dog, Rocky. Visit her online at www.cassandra-adams.com.