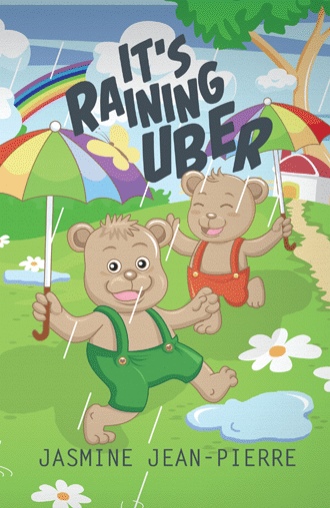 The day is a typical one in the cloud community. It’s raining. Cloudy Rain sits in his bedroom gazing out his porthole window. He is watching the hypnotic dance of the rain as it showers down. Accompanied by his mother, Cloudy Rain can’t bring himself to stop gazing at the rain.

“Mother, there is something so magical about the rain.” Some people hate the rain, and they run from it as though being chased by a hungry fox.” “But not me.” “I want to play in it.” “I want to dance in it.” “Someday, I’ll choose a cloudy girl and we’ll get married in it.” “One day mother, I’ll sleep in the rain.”

Mrs. Cloudy Rain has heard this from Cloudy many, many, times before. She is aware of his deep love for the rain. And just like always, she cautions Cloudy once again about the rain. “Sleeping in the rain can be hazardous.” “You may float away in it.” Continuing to gaze out his porthole window, Cloudy chuckles.

“Silly me, mother.” “It’s just so beautiful.” “I want rain to run through my veins.”

It’s just the typical rainy day of gazing out his porthole window.

Cloudy asks his mother for permission to go outside and play in the rain. Eventually, she’ll give her permission but there’s always a warning before going outside. Mrs. Cloudy Rain warns Cloudy to be careful. The clouds are slippery when wet. She warns him to play at the center of the cloud, and most importantly, she makes him promise there will be no cloud jumping.

Cloud jumping is a game children love to play in the cloud community, but this game is much too dangerous to play in the rain. So she gives cloudy permission to play. She just can’t say no because it’s what the children do in their community.

Cloudy, having heard his mother’s warnings and knowing them all too well, promises.

“There will be no cloud jumping . . . because it’s much too dangerous, mother.” “And, I will be extremely careful on the slippery wet clouds, and I will stay away from the slippery edge of the cloud.”

Speech and promises made, Cloudy Rain darts up a flight of stairs leading to the front door. From a closet at the top of the stairs, he puts on his rain boots and rain gear, and he exits the front door.

Outside, children are frolicking on their nearby fluffy cloud homes. Engaged in rain play games, they make cartwheels. They stomp and splash the rain puddles. Some children tilt their heads back and drink the rain. Others play tag, you’re the raindrop games. The children are having fun and Cloudy Rain wastes no time joining in.

Cloudy’s head is tilted backwards. He’s drinking the cool rain. Rain drops onto his face and into his mouth. From a distance, a voice is heard. An intercom is posted at the top of a street light pole. There the voice can be heard. Cloudy hears the familiar voice call his name.

“Cloudy Rain . . . you’re drinking too much rain water.” “Come inside and play with me.”

Cloudy looks up at the speaker where the voice is heard. Cloudy shouts back.

“Rain Forrest, the clouds are too slippery and I promised mother I wouldn’t jump the clouds.” “I don’t want to fall to the planet below and get lost forever and never be heard from again.”

He hopes this is clear to everyone because he doesn’t mind repeating it.!

“Oh that’s the monster in the closet story our parents continue to scare us with.” “Clouds are supposed to be slippery.”

But Cloudy will not be convinced. He shouts up to the intercom. “Children are disappearing all the time and until I see them reappearing, I’m not jumping the clouds while it’s raining.”

Rain Forrest gets frustrated. He sits back in his chair. In his Uber toy room, he has every toy a child will ever want to play with and the toys are all supersized in this Uber mansion he lives in with his parents. Rain Forrest will not be deterred; he will not give up.

“You’ll be very careful jumping over.” “You know the raindrops are bigger at my house.”

Cloudy Rain is beginning to become frustrated too.

“Yes, the raindrops are massive at your house, and they make huge splashes on my head.” “And when they land on the ground, they leave the largest puddles.” “I’m just not interested in huge raindrops right now.”

Cloudy just wants to continue his rain games with the other children. He also, wants Rain Forrest to not show off. Everybody is aware how super-soaking wealthy he is, with the super fluffy cloud mansion and the raindrops are super-soaking big. His Uberness has been acknowledged, but Cloudy Rain stands his ground.

“I’m still not jumping the clouds.”

Rain Forrest doesn’t mean to show off his Uberness. It’s simply unavoidable. He appeals to his best friend with heart felt emotions.

He reminds Cloudy that they don’t have enough days to have fun inside. But Cloudy will not be swayed. He made a promise to his mother.

Cloudy Rain loves to do cartwheels, backflips and splash puddles in the rain. But not Rain Forrest, he hates the rain. He doesn’t want to play in it, nor go outside when it pours down from the highest clouds in the sky, and he certainly doesn’t want his soggy friend close by when he’s been soaked by the rain. Yet, on any sunny day, it’s Rain Forrest whose brightness shines.

He doesn’t want a shady old oak tree, a big beach umbrella, or creamy creams. He simply wants to bake in the sun until he glows like Saturn because according to him “the sun is the mother who tans me.”

Cloudy Rain fulfills his part of the agreement. While the best friends have many exciting and life changing adventures that will test just how strong their friendship really is, Rain Forrest hasn’t stepped up to fulfill his end of the agreement.

When the best friends are separated by one of their adventures, and there’s a possibility they will never reunite, Rain Forrest steps up, and he takes the biggest of leaps to search for his best friend.

Jasmine Jean-Pierre worked in the financial industry in the New York area for many years. She is pursuing a career as a screenwriter and author. She lives in Florida, where she is furthering her education in English and Creative Writing.