The Autobiography of Gabor A. Somorjai with Mitch Jacoby 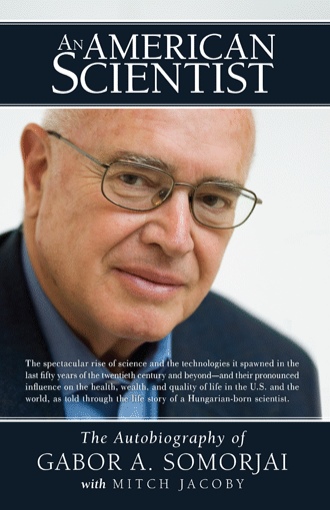 As a three year old, I thought the paternoster was magical.
This marvelous early-style elevator went up and down without stopping—shuttling people, one at a time, between the floors of the Hungarian Credit Bank, in Budapest, where my father worked when I was a little boy. The moving metal cubicle didn’t come to a quiet stop and wait for passengers to load and unload leisurely. Rather, as it approached our floor, we had to get ready to step in—just in time—and quickly step out when we reached our destination.
The trips to the imposing bank building and the rides on its magical paternoster were exciting events in the early part of my childhood. It was a happy time and a wonderful place for a little boy to grow up –and I was fortunate to be there in that place at that time with my family—though little kids don’t usually think about their good fortunes. But good fortune is indeed what I had and it’s something that stayed with me even when life became stormy, which it did more than a few times—like during the mayhem that turned Hungary and its people upside down some 65 years ago.
I had the good fortune to come from a strong family and from a country that produced some of the greatest scientific minds of the first half of the 20th century. And when all hell broke loose there in the 1950s, I was lucky enough to have escaped—and to have done so together with Judith Kaldor, with whom I have been blessed to raise a beautiful family and share more than 55 years of marriage.
As a (post World War II) refugee who fled to the United States, I was again fortunate to have made my way to the west coast, where I was accepted as a graduate student at the University of California, Berkeley, and later became a chemistry professor—a position I have now held for nearly five decades.
Without a doubt I ended up in the right place and at the right time. As the United States became the science and technology engine of the world, Berkeley, home to a top-flight research university and Lawrence Berkeley National Laboratory, served as one of its main powerhouses of scientific innovation and discovery. And I was positioned right there in the middle of it.
My research career, based on an area of chemistry known as surface science, coincided directly with the rise of this country’s prowess in high-tech industries, such as microelectronics, computer disk drives, and other revolutionary and game-changing fields. My career also overlapped with the onset of the energy crisis of the 1970s, which triggered a wave of research in a surface-chemistry specialty area known as catalysis. That field, of which I have long been an active and proud proponent, took upon itself the challenge of discovering the catalytic materials and methods needed to produce synthetic fuels and to make the most of natural resources while using as little energy as possible. That’s also the field of science that developed the automobile catalytic converter and other devices and techniques for protecting the environment and cleaning the air, water, and soil.
By building a research program in these thriving and exciting areas of science that have helped improve this country’s—and for that matter, the world’s—health, well being, and standard of living, I had the good fortune to attract top students and research associates from all over the world to my Berkeley laboratory.
Like many other American scientists, my scientific genealogy or family tree originates in Western Europe, specifically Italy and Germany. In the usual ways of scientific continuity, mentors pass along to their students thought processes, concepts, and approaches to thinking about nature. For generations, scientists have learned from their predecessors, developed new ideas as they unfolded in their day, and passed along new knowledge to the next generation. I have been lucky to be part of the time-honored tradition of scientific pedagogy.

After a long and fruitful career that has been highlighted by international recognition and honor, I deeply believe that my most important accomplishment by far, and the one of which I am most proud, is this multinational, multicultural, and multigenerational web of some 400 interconnected scientists who make up the extended Somorjai research group.
A number of world famous Hungarian scientists came to the United States in the early part of the 20th century and helped strengthen this country scientifically, technologically, and militarily. Among the most famous are Edward Teller, Eugene Wigner, Theodore von Karman, John von Neuman, and Leó Szilárd. I’m proud to hail from the same country of origin as these seminal thinkers and like them, to have pursued a career of scientific discovery. But this group of scientific superstars predated me by a few decades.
My life history is centered on the next fifty years, roughly the second half of the 20th century, when a second generation of Hungarian-born American scientists made its mark on U.S. science and technical know-how. Like all immigrants, I faced cultural and professional challenges, the outcomes of which often determined success or failure. Here again I was fortunate to have made some good initial choices that gave me the self-confidence to take risks, be creative, and recognize rewarding opportunities.
The latter generation of Hungarian scientists, the one in which I include myself, faced political and social challenges that were very different than the challenges faced by the earlier generation. Yet like the scientists who preceded them, my contemporaries also thrived while making important and lasting contributions to the U.S.
I’m not going to tell you that I singlehandedly sent man to the moon or invented personal computers or the Internet, for that matter. I’m not even going to tell you that things were always easy. They weren’t. Like the rides on the old-time paternoster, there were times in my career that I was clearly moving up and other times that I seemed to be coming down. But I will tell you—with pride—that the discoveries my students and I made together have in some ways helped advance science and technology and have helped make progress in addressing important societal needs. I will also tell you that the blessings of good health and my family’s love have made this long trip possible.
But I’m getting ahead of myself now. Let me start from the beginning and tell you a little about my family and what life was like for a young boy growing up in war-time Hungary.

As a young man, Gabor Somorjai couldn’t have known he would one day be forced to flee his native Hungary. But upheaval in Europe during and after World War II led him to the U.S. where he immersed himself in science and soon began building a research group at one of the powerhouses of scientific discovery.
The timing couldn’t have been better. The Sputnik wakeup call that triggered the huge influx of government support for scientific research in the second half of the 20th century bolstered fundamental research programs like the one Somorjai established at the University of California, Berkeley, and Lawrence Berkeley National Laboratory. Key discoveries in his field—surface science—led the way to advances in catalysis know-how that underpin today’s energy storage and transformation technology and safeguard the environment.
By revealing the unique ways microscopically thin layers of atoms and molecules control the chemistry and physics of surfaces, modern surface science also spawned rapid development in microelectronics, high-power computing, and communication and information technology. But the scientific impact of the field that Professor Somorjai shaped doesn’t end there. Key discoveries in surface science also supported the development of new medical instruments for non-invasive investigation of the human body, as well as tools and techniques for repairing organs and bones. These discoveries have helped increase our life expectancy and vastly improved our quality of life.
Through a fascinating account of his life story, Gabor Somorjai leads us through the dramatic changes in science and technology that took hold during the last half century and are sure to influence our lives in the years to come.

Gabor Somorjai escaped the Holocaust in Hungary and made his way to Berkeley, CA, where for five decades he and his students set the foundation of modern surface science. He has written four books, published more than 1000 articles, and trained some 400 research assistants in this critically important field.