Prelude to War: Book One

Sparrow Wars in the Garden of Bliss 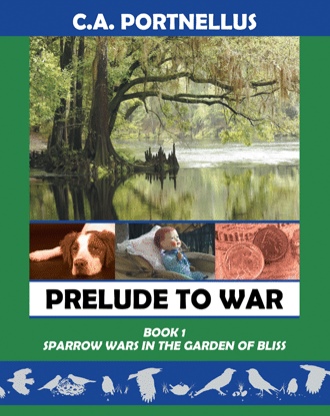 Once upon an age, in the country of America, within the state of Texas (a state which many Texans believe to be a country unto its own or at least the best ‘state’ to be in, and you may take that how you like it!), in the thriving lumber and oil town of Beaumont, there stood a house, older than some, but not much newer than others. It was not an overly beautiful house but the family who lived there thought it was, mostly because the house was theirs. It was a dark chocolate brown color, with white painted trim on the lacy and ornate “gingerbread” cupolas decorating the porch and the eaves along the roof; the house looked like a chocolate cake with daintily iced decorations. It had a wrap-around porch where anyone could take refuge on a hot summer’s day, to sit on the porch swing or rock in one of the many cozy chairs, perhaps the host would offer a glass of lemonade to the hot visitor.

If one were to visit the family today, to climb the few steps up to the porch admiring the pots of bright red geraniums upon the way; then to knock upon the door decorated with carved birds and a tree branch and to perhaps stand upon tip-toe to peek in one of the glass diamond shaped windows; we would find, alas, no one at home.

The family is on vacation visiting relatives.

Let us travel to this other place and vacation too.

Traveling east out of Texas, into the land of swamps, dangerous creatures and alligators, beautiful bayous, breath-taking flora and fauna, into the land of mystery and steamy seduction, one has journeyed into Louisiana, and traveling up the lazy meandering Mississippi River past sleepy towns, boggy forests, ancient lawns and stately homes of the pre-antebellum era one has arrived at our destination. Along that wide river set back among a dense copse of ancient trees and sweeping expanse of lawn sat the fifty-year old house, and the plantation a lone survivor of the pre-Civil War.

The house was not the original stately plantation mansion with Grecian columns, relaxing verandas and wrap around porches and many beautiful gardens, that was built there in 1752 by one audacious and profitable merchant named, Clement La Barre, but it was a good house never the less. That older house proudly stood through the tempests, hurricanes, attacks of river vandals and the strife of the Civil War, only to burn to the ground by a carelessly placed oil lamp in the autumn of 1878.

This was the ‘new house’ for the La Barre family, even though it had housed some three generations following the Civil War, and some of the original French Baroque and colonial furniture and possessions, which had survived the fire too were still used to the day. Thus, it was the ‘new ancestral home’, at least, for what remained of the proud and resourceful family La Barre.

The house itself was of a simple brick design of three stories, each floor with a French style veranda often used as sleeping porches wrapping the rear of the building. The front sported a shaded wide columned porch on the first floor. Long graceful windows and deep eaves with ornamental ‘gingerbread’ spanned the second floor and the third story were dormer windows for the garçonniere nestled within the roofline. The roof was a low-hung wide spreading affair offering shade from the sun and heat. There was a marble and brick terrace off to one side of the house, a surviving leftover from the original mansion, beneath the terrace was a lovely garden of roses and meandering paths and maze of hedges reminiscent of the artful gardens of the La Barre’s ancestral France. The terrace was conveniently situated to catch the cooling breezes off the sweeping lawn and the nearby river, by opening the double French doors on a morning or evening, the cooling air circulated through the lower house into the dining room and parlor. The flower gardens offering a daily perfume were well-tended by the current generation’s Madame Annette, the wife of the heir, François Barre.

The land had endured, as had the rich farm during its history both of pre-slavery and post slavery. The land had prospered always and it had helped to make the La Barre family wealthy and in some eras just comfortably well off. The plantation had changed over the centuries, in scope, size and crops. In previous eras the plantation was a prolific agricultural producer, and had boasted the finest indigenous black rice, sugar cane, indigo and cotton, however, those were crops requiring slaves or at least a good many helping hands.

After the Civil War and the loss of property and a few land divisions within the remaining family, the then plantation owner Carl Barre, manumitted his slaves, and he decided those ‘Grand Days’ were over. He planted orchards in many of the fields that had once been for the laborious crops. The property now boasted of peach and apple trees, pecans, and some citrus. The rest of the acreage was for animal fodder, peanuts and general food crops that the family could live on or sell. The apiaries to date are from the original bees Clement La Barre had brought with him from Canada for honey production. The La Barre plantation was renowned for its fine delicate honey.

Growing along the muddy banks of the Mississippi, there remains an ancient patch of the native dark rice. There an eddy of water runs back into the land and into a marshy place that is useful today. The marshes a perfect place for generations of Barre men and children to play, swim, hunt fowl or for catching frogs or crawdads, there too swam granddaddy catfish and other fishes that liked to do their feeding in the dark rich silt of the slow moving waters of the La Barre marsh, making the area a lively fishing spot.

The La Barre family too had endured through booms and bust, way-ward hurricane storms, torrential rains, pestilence and drought, and this last leg of the La Barre family had stubbornly stuck to the land like a tick on a dog. They were proud of their tenacity too. They were what remained of Clement La Barre’s original family. François and Annette Barre were daily living their ancestors’ dream of the French living free in America.

François Barre felt himself to be a lucky man, he was the third son of a third son; this was his lineage passed down from generation to the next from Clement La Barre, who was himself a third son. Somehow, that lineage made François feel special. François had three sons too, Francis Jacques, Paul Jean, and Richard Carlisle. It was to his first two sons that he would later give the onerous duty of the Barre plantation.

However, all of his children loved and revered the plantation, enjoying the beauty of the land, the good muscle aching feeling of a day well spent working in the fields, orchards, or with the animals. François’ grown children and grandchildren returned often to enjoy that simple bucolic life and to help with the seasonal plantings and harvests. Life was good along the river and on the ancestral plantation.

It is to this very place that we come. We shall find the next generation, the third son of a lineage of third sons; to find Barton Carl Barre age five years and three months, and very much bored and disgusted with his life to date as he sat upon a step on the front porch of his grandparent’s venerable house.

In 1928, the Barre families of Texas and rural Louisiana are all that remain of the once aristocratic and wealthy La Barre family of Louisiana plantation owners. The constantly changing modern world makes it a struggle to retain their family legacy, although they still enjoy the benefits of an idyllic country lifestyle.

Richard Barre—a young man blessed with a wife, three sons and a prospering carpentry business in Beaumont Texas, has all he needs to be happy. As a third son descendant of generations of third sons, Richard feels he is luckier than most people. When he is dealt fateful and tempting wild cards, he must choose wisely if only to save his family and perhaps even his soul. But for every tempting gain, Richard feels an ill wind blow. Perhaps this is the La Barre family curse.

After the stock market crash of 1929, any joys or slight rewards are forever diminished by a feeling of foreboding. Thus, Richard Barre believes his youngest son, Barton, is either destined for greatness or ominous ruin perhaps as a result of Richard’s actions and the family curse. He hopes to be the spiritual guiding compass to save the boy and the rest of his growing family.

This is the first volume of a new series of historical novels that present modern-day parables depicting both the best and the worst of humankind struggling amid hardships and strife to attain the bliss of peace.

C. A. Portnellus leads a serene yet fulfilled life, enjoying many creative and artistic pursuits, traveling to relaxing spots, and celebrating life with a lovable life mate and the resident feline.