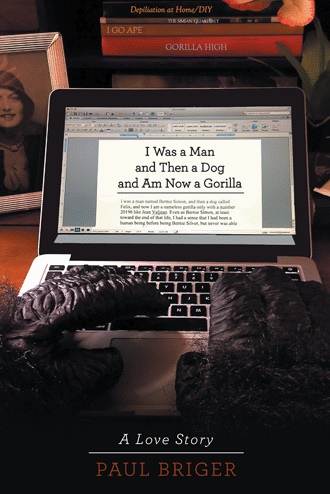 Narrated by a gorilla, this is the life of Bernie Simon.For fifty-five years, his mother made him a veritable Eunuch, to provide her with companionship and care in old age. Upon her death, he makes up for lost time. However, after gaining an ample measure of sexual fulfillment, he opts for true love, but must kill to obtain that love.

Bernie sacrifices his life for the life of another creature, which earns himreincarnation as a dog instead of a lowly mosquite. In his new body, he is known as Felix-a pathetic dachshund. Again, love is in the air, but this time, poor Felix of a broken heart. Bernie’s soul is transferred to yet another body: that of a literate gorilla.

As a gorilla, Bernie becomes a celebrated author. Through his acquaintance with an elderly woman, he realizes that he had true love before— in a past incarnation—prior to becoming Bernie Simon. He becomes hopeful that in a future life, love will find him, surround him, and last a lifetime —or maybe several, whether as a human being or otherwise.

Paul Briger has been a corporate lawyer in New York City, an antique dealer, a furniture manufacturer in Mexico, an historian, and now a new voice in fiction and non-fiction. Paul wrote the text of “BRIGER + BRIGER, COMFORTABLE & JOYOUS HOMES,” published by Rizzoli International Publications, Inc. in 2007. He currently lives in Boston, Massachusetts, with his wife and one of their six children.