My Life in Politics, Social Activism, and the Law 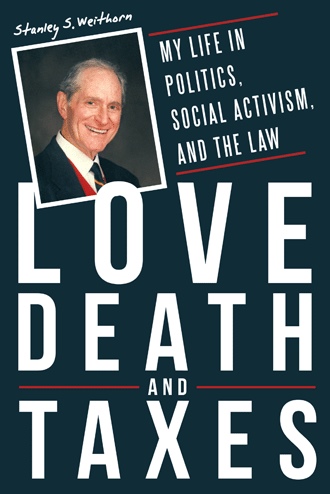 It was early April, 1945. The German opposition had almost completely crumbled as we crossed the Rhine River and began our march through northeast Germany. We were well on our way to the Elbe River, where we knew we’d meet the Red Army troops.

Having just survived five months of incredibly violent combat, I was certain I was beyond shock or surprise, even though I was still only 20 years old. On April 10th, units of our division were directed to enter Hanover-Ahlem—a Nazi labor camp. Walking into such a place changes one forever.

I went into shock, overwhelmed by the physical condition of those still living and staggered by the piles of corpses, stacked up like logs by a fireplace. I had thought combat had hardened me, but this was more than I could handle. I simply slumped to the ground, speechless. The men who stared back at me, their eyes filled with unfathomable pain, were no more than skin and bones, their clothes nothing more than rags. Many could no longer stand at all.

I had heard stories of the existence of Nazi concentration camps and Nazi labor camps, but not even in my most fevered dreams could I have imagined how inhumane they were. It was not until quite some time later that I learned that the skeletal survivors I encountered at Ahlem were Jews. To me, that morning, they were only barely recognizable human beings, the most pitiable human beings I had ever seen.

As the day wore on, I slowly recovered from my total shock and regained some ability to act normally. The night, however, was not so kind. Lying awake in the dark, images of what I had witnessed tormented me. Ahlem was incomprehensible. It abruptly shattered my faith in all I was taught to believe. By the time the sun rose, this Orthodox Jew had realized to the depths of his being that never again could he believe in God. No Supreme Being, I now knew with absolute certainty, could visit such agonies on his own creation.

Overnight, I became a committed atheist and have remained so to this day.

My infantry unit soon picked up and moved east of Ahlem to rendezvous with other units from our Division. It was a warm Spring in northern Germany, and we moved quickly, encountering no military resistance. Perhaps I might have thought further about all that I had experienced at Ahlem were it not for a surprise Nazi artillery attack that tossed me at least 10 to 15 feet into the air, knocked me unconscious and left me with a spinal injury so severe I lived in a steel brace for the next 18 years of my life.

In the years since then, most of my energies have been consumed by efforts to improve the lot of humanity in large and small ways. As a practicing tax attorney, I’ve had the opportunity to work with a remarkable array of illustrious clients, including statesmen like former president Jimmy Carter; business moguls like Carl Icahn, Ted Turner, J.B. Fuqua, and George Soros; and creative powerhouses like famed travel editor Arthur Frommer, controversial publisher Ralph Ginzburg, and legendary song writer Hal David. But my most rewarding and gratifying legal work has been on behalf of organizations that are struggling to make our world a better place—by protecting the environment, helping the poor and the homeless, and defending the rights of all. This work has not been as lucrative as the corporate assignments I could easily have concentrated on, and it has often landed me in hot water with some of the most powerful forces in our society, even getting me targeted as an “enemy” by a president of the United States. But if I had it to do all over again, I would devote even more of my time and energy to it. This pro bono work has made my life truly meaningful and complete.

Over the years, many people have questioned me directly about what drives me to do this kind of work, and I have to confess that it was not until February 20, 2005, that I finally discovered—at age 80—the answer to that question.

On that day I picked up my daily copy of The New York Times as always and read the story of Albert Tott, a World War II veteran from my Division who—unbeknownst to me—also entered Ahlem on April 10, 1945. Mr. Tott had a camera with him and he used it to take pictures of the same faces at Ahlem that I had found so unbearable to look at 61 years earlier. One of Mr. Tott’s photographs was reprinted in the Times, and as I stared at those ghostly faces once more, I had a sudden epiphany. A crucial piece of my own personal history that I had long ago buried alive without knowing it surfaced to my conscious awareness.

I suddenly recalled that, on the long ago night of April 10, 1945, while I lay awake in the black night at Ahlem, that there was something more to my realization that I could only be an atheist. There was a deeply felt, almost subliminal thought, which I had utterly forgotten until The New York Times opened it up to me 61 years later. In those pre-dawn hours at Ahlem, as a young man of 20 and a newly-made atheist, I had also thought to myself in the dark: If there is no supreme being, then each one of us is responsible for helping humanity.

I had packed away this clear-as-a-bell insight by morning, and had "forgotten" it completely by the time my unit marched out of Ahlem the next day. But now I see that this thought never really left me. Sublimated, it burned like an eternal flame in the deepest recesses of my mind. It shaped my life. It set my direction. It prodded me. It pushed me and at times it has driven me. Since the age of 20, wherever life has taken me, I have almost automatically seized every opportunity I could to fight the forces that turn men into something worse than beasts.

Only now do I know why.

Stanley Weithorn has lived one of the most remarkable personal and professional sagas of our time. Survivor of an abusive childhood, he became a political activist, legal pioneer, and a crusading philanthropist. Weithorn worked his way through law school, became a partner in a prestigious firm, and then almost single-handedly created a new field of practice—charitable tax law. He wrote the first book on the subject, a seven-volume treatise more than 5,000 pages long that he updated for twenty-five years.

More important, he applied his expertise to social and political causes, waging legal battles on behalf of the poor, the environment, freedom of speech, women’s rights, gay rights, and the anti-war movement. Weithorn’s efforts won him more than his share of adversaries. He was targeted by the IRS and right-wing interest groups; he was named on Richard M. Nixon’s notorious “enemies list.” But if not for the legal brilliance and the moral commitment of Stanley Weithorn, groups ranging from The Nature Conservancy and the National Resources Defense Council to People for the American Way and the National Gay & Lesbian Task Force might have been crippled in their efforts—if they existed at all.

In Love, Death, and Taxes, Stanley Weithorn tells the story of his event-filled life, including his personal struggles against illness and family tragedy as well as the political and professional battles he fought on behalf of society’s least-fortunate. Feisty, frank, candid, and opinionated, Love, Death, and Taxes is one of the most unusual memoirs you will ever read.

Stanley S. Weithorn had a unique 50-year legal career. He created and specialized in the field of charitable tax law, wrote the first work in the field, and dedicated at least 20 percent of his practice time to small, financially starved charities.