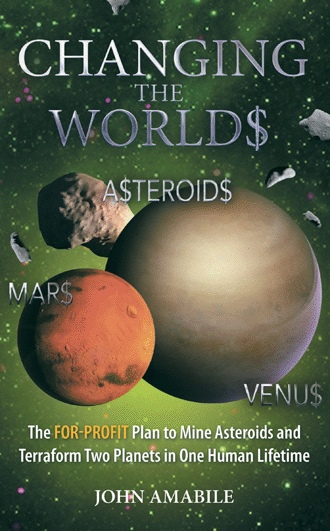 Before I begin to delve into the nuts and bolts of my plan, I would like my readers to open their minds. Only a tiny part of this plan is solely mine, much of it is pieced together from men before me. But, having said that, this will be like nothing you have ever read before.

Imagine the first man to behold a piece of drift wood. Perhaps he took the notion to fashion one himself, and then set out upon the sea. Perhaps he would do this for territory, to impress a girl, for property; perhaps for the joy of using his mind to alter his surroundings, but there is very little chance that it was because a tyrant ordered him (even Christopher Columbus approached the Spanish monarchy, not the other way around). But imagine what a disaster it would have been for mankind if a witch doctor had met him on the beach and told him, and everyone that followed him, that he could go out to sea to look at fish and birds, but that it was strictly forbidden by (insert unjust authority here) for him to derive any profit whatsoever from his enterprise. Imagine Pasteurization, Antiseptics, or the Bessemer process, Steam power, Aviation, metal, agriculture or fire never opened to commerce, but simply as the ‘collective property of mankind.’

I believe that mankind is a good thing. I disagree with Hitchhiker’s guide to the Galaxy that the creation of the universe was a bad idea. Since mankind is a good thing, its continued existence is also. Now, it is possible that mankind will manage its resources and space well enough to forever live on Earth. Even if we accept this ambitious assumption we are still left with the limited horizon of our own tiny planet. Isn’t it amazing to think that in 400 years a solar-system wide civilization will look back on the 21st century as one of tiny states with no vision of the future, stifling economic growth, and silly conflicts over pocket change compared to the resource that will then be available to mankind?

Indeed, this is the view that we have of the world during the dark ages, and this disparity was created because a handful of Europeans created a society that would accomplish virtually every technological and most of the political achievements of our species in the last 400 years. Japan went to war in 1941 over the amount of oil that they burn in 6 hours today. War and conflict come from one government drawing a line around a resource, or continent, or ethnicity, and threatening to bomb or shoot or bludgeon anyone that passes their line. In 1967 all the governments of the earth came together and drew such a line in the sky. The Space Ban Treaty, sold by the media as banning all weapons in space, also made it impossible for anyone to own property in space. Henceforth it would be ‘the collective possession of mankind.’ Anyone with knowledge of man’s history should know the result that follows property being turned over to ‘mankind.’ Without the idea of private property economic growth is impossible, so the Martian real estate market has grown at 0% for the last 40 years.

Platforms launched into orbit are still the property of the launching entity, so the tiny belt of territory above earth has seen billions of dollars of investments, and trillions of dollars of income (cell phones, and GPS, just to mention things half of mankind uses daily). But, anything that we don’t put in space is owned by ‘mankind’ and so there has been no economic growth throughout the vast majority of the universe.

So, to skip the political stuff, let’s say that the only way we will colonize the Inner planets IS IF WE DIRECTLY PROFIT FROM IT. That might sound very strange, particularly since most Space-faring Governments have spent hundreds of billions of dollars in space and have made no progress toward space colonization since 1972. Of course, none of these governments can be accused of making a profit, but this is precisely why the government monopoly of space needs to be redefined. What if there were no Native Americans in North America, and England banned any merchants, farmers, or fisherman from crossing the Atlantic, only the British Royal society was allowed to cross, at great expense. Perhaps after 6 successful expeditions (and one where they had to turn back) they would have planted a flag, collected some rocks, and never returned. The expense for any expedition that involves months of traveling in large sophisticated ships is very expensive, and if there is no expectation of profit to make investors bold then England would have never returned. Where would mankind be?

I propose something which is philosophically, militarily, economically (I’m ignoring politically) correct: The complete privatization of space, and the formation of a Space Corporation and an Extra-Planetary Exchange for the sale of property off of the Earth. The Space Corporation will have a few initial tasks in order to open the solar system up for settlement, but as much of this process will be privatized as possible, and as soon as possible.

When England (before it was the United Kingdom) set out to establish colonies around the world she did this in the form of trade companies. Ohio, Virginia, India, Pakistan, Bangladesh, South Africa, even the Dutch in Indonesia did not organize these colonies directly from the government. The businesses that organized them picked economically viable places to settle, they factored in logistics, politics, trade routes, and resources. I am not condoning the colonization of the world by Europeans but I will point out that the statist colonies organized by Portugal, Spain, and France have been rife with civil war and stifled economic growth, where south Africa is the richest and most stable country in Africa, India is the richest and most stable country in Asia, and America is the richest and most stable country that has ever existed. For the United States the Virginia and Ohio Companies organized investors, funded immigration, selected wise locations on ports and rivers, and dealt with its customers through free exchange and voluntary choice. Sadly the Native Americans and rival Europeans were not part of these companies, and wars against people outside of the colony were still common, but internal stability was far higher than say in Spanish controlled Bolivia, which had 52 revolutions in 47 years. Haiti which has an economy based almost entirely on foreign aid from the former company-colonized states was also directly governed from Paris.

Public auctions will be held for property off of Earth; this will simply keep accountability of who owns what, regulate land claims, and ensure there is no land speculation (holding land with no plans to actually use it). Most of the Company’s revenue will come from short term mining, most likely on Eros 433 within 10 years of founding the company. Using the cost effective terraforming models of Dr. Robert Zubrin and Carl Sagan Space Corporation will be a profitable asteroid mining business at first, but we will factor in terraforming as the profit from mining in space starts to come in. Much of the effort of terraforming Mars and Venus can be done at no or little cost, since we will use almost the same technology we’ve used to mine asteroids. While a lot of my ideas for terraforming may seem strange or grandiose they will be paid for by a share of mining asteroids, use mining technology, and be profitably encouraged by the Space Exchange. Since the Space Corporation will own this land, the difference in value from a terraformed Venus to an unterraformed Venus will give the company a fiscal incentive for terraforming.

If someone in England 400 years ago said he wanted to build a country that has 90 times the population of England (at the time) and build 10,000 towns, including 3 of the largest cities on Earth his countrymen would have laughed at him, since that undertaking would be impossible, or c

We can buy cars, food, homes, and businesses—so why can’t we buy pieces of outer space? Author John Amabile, a space enthusiast, dreams of a world where we could do just that. In this study, he lays out a clear approach for moving mankind into space profitably and with minimal interference from the government in a single human lifetime.

It starts by disputing the idea that outer space is collective property. Amabile maintains that, as history shows, without the ability to own and profit from something, progress becomes virtually impossible. His plan is to form a corporation and exchange to facilitate the sale of property in outer space, which would open the solar system up for settlement. The process should be privatized as much as possible, and it would pave the way for the terraforming of two planets, Mars and Venus, in one lifetime.

By mining objects in space, companies could finance terraforming operations while earning a profit. More importantly, humanity would conquer a new frontier and play a key role in Changing the Worlds.

John Amabile, a West Point graduate, is a former Air Defense officer in the US Army who served in Iraq and Afghanistan. He is a Captain in the Army Reserve and is attending Graduate School in Florida.