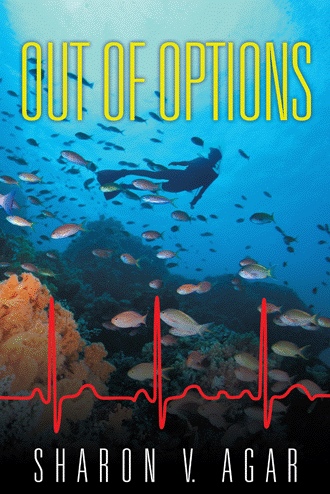 “Shit! What’s going on with Sherbourne?”

Arnie Dutton sat up so suddenly that his chair rocked, threatening to dump his Italian-suited rump on the floor of Silverman Gable’s trading room. It was 10 a.m. and something major was happening to the stock of a mid-sized chemical research company. Whatever it was, was not good: the stock had dropped from $56.25 to $51.50 since the opening. Arnie turned to his trading partner to see if Pete had any words of wisdom on the subject. The chair was empty.

“Goddammit!” Arnie jumped to his feet and stormed toward the corridor. His outburst went un-remarked by the other sixty-five traders on the floor, most of whom were either intent on their screens or busy with tantrums of their own.

“Pete, get the hell out of there! Sherbourne’s tanking.”

A rustle of papers followed, confirming Arnie’s theory that Pete had not been using the stall for its intended purpose. When Pete emerged, Arnie grabbed his arm and found the incriminating evidence: Black Belt Kendoku, Book 4. Cursing, he followed Pete around the Equity Capital Markets desk, swerving to avoid colliding with a red-eyed currency trader.

“Sherbourne?” Pete asked. “Aren’t they in a friendly takeover by I.A.L. Group? Around $58 a share, I think. The deal’s closing any minute.”

Arnie shook his head. “Not any more.”

Pete reached his spot, slid into his chair, and entered Sherbourne’s ticker symbol SHER. The stock was now at $48.20. He called up the latest news. There was nothing to explain the sudden decline. He checked the trading volume for the day: it was already three or four times the usual rate. His trader’s instinct kicked up a notch.

The screen flashed up a new bulletin. The Exchange is suspending trading in Sherbourne stock pending an announcement by the company.

“Yeah,” Arnie concurred. “Wowzer. And I’ll bet if you weren’t a Midwesterner you’d say something even stronger.”

Pete ignored him. Bad news for Sherbourne was not necessarily bad news for the Silverman Gable trading desk. Profits could be made on downswings as easily as upswings, and the bigger the swing, the bigger the opportunity.

He came to a rapid conclusion. The Exchange would not have suspended trading unless they felt the stock was headed for a freefall. The look his wife called the ‘shark smile’ slid onto his face. The combination of the price drop and the pending announcement meant only one thing: something had happened to crater the deal. Pete would bet on it. In fact, that was exactly what he planned to do, just as soon as trading resumed.

Across the river in New Jersey, the offices of Sherbourne Incorporated resembled a wedding hall after the bride has said “I don’t.”

The classic stages of grief were evident. Senior managers had passed through denial and a great deal of anger to an attempt at bargaining, which was rejected out of hand by the now ex-acquiror. Holders of company stock were profoundly depressed. Those without a stake went straight to acceptance, and—since fortune had favored the lowly in this instance—some very junior people privately cheered that they had lost the least.

The person who had lost the most was Sherbourne’s C.E.O., Alan Wheeler.

Alan was third generation Sherbourne. His grandfather had started the company with $5,000 and a strong aptitude for chemistry, both inherited from his mother. Grandpa Wheeler applied his skill to making additives to food and cosmetics. He also attracted other excellent chemists, and before long his team regularly turned out innovative, top-quality products. By the time his grandson Alan took over, Sherbourne had almost three hundred employees and their pick of some of the best researchers going.

Alan Wheeler was now in his sixties and had run the company for half his adult life. He had been thinking of moving on anyway. In the weeks since the acquisition had become public, he had allowed himself to indulge the fantasies of what it would be like to be worth seventy-odd million dollars. He could buy that beautiful sailboat and actually use it. Sotheby’s real estate ads were no longer hypothetical. His wife had lost weight and promised her favorite charity a big donation. She was probably too mortified to talk to them now, he thought angrily. Damn it all! The person responsible for this would pay!

Three floors below the Trading Desk, on Silverman Gable’s Research floor, Becs Decker sat at her glossed-cherry desk with the office door closed. She was deep in analysis, her right hand working a yellow highlighter while her left provided support and the occasional scratch for her curly-blonde head.

Becs was a retail foods Analyst, ranked #1 three years in a row. She knew the food industry inside-out and had a point of view on all the major players. This view, and her recommendations for ‘buy, hold or sell’, she disseminated quarterly to her clients—large-scale investors looking for a good place to invest their cash.

Becs was engrossed in a footnote when the phone rang. Her hand reached for it before her eyes registered the caller ID.

She swallowed her come-back, reminding herself that she was a professional and that just because someone was a dork-head didn’t mean she had to tell him so. As long as he didn’t sing the stupid song.

Okay, now he had sung the stupid song. As if she hadn’t heard it a million times. As if that wasn’t the reason she went by ‘Becs’.

“What’s on your mind, Harold?” she asked.

“Thought you might want to know that the Exchange has suspended trading in Sherbourne pending an announcement that should be coming out any time now.”

Her irritation vanished. “Thanks for the heads-up. Gotta go.”

She flicked her computer to the news site—nothing yet—then reached into the back of her desk’s top drawer for a small pouch full of single dollars. Her most urgent priority now lay at the end of the corridor.

Like the proverbial army, Becs Decker marched on her stomach. At the vending machines she pumped in a string of singles and retrieved the motley assortment of candy bars, salty snacks and caffeinated sodas that clanged to the bottom. Now fully armed for imminent siege, she returned to her office.

By the time she reached her desk the announcement was out.

I.A.L. Group and Sherbourne Inc. have announced the cancellation of the proposed acquisition of Sherbourne by I.A.L. A conference call with investors is scheduled for 11:30a.m.

Becs mused on this. The I.A.L.-Sherbourne merger had seemed a match made in heaven. I.A.L. desperately needed better R&D; Sherbourne had it in spades. So what had happened to nix the deal?

Ten minutes and a phone call with Sherbourne’s desperate head of investor relations later, she had her answer. She hung up and started making a list of investors to call. She wanted to reach as many as possible before the 11:30 conference call—mostly to let them know she had already spoken to Sherbourne and had the inside scoop. And what a scoop it was! A previously unsuspected toxic waste site, right under Sherbourne’s nose. The buyers of I.A.L.s top seller—organic Rain Forest Crunch—would not like that at all!

The tiny Caribbean isle of Ste. Anne seems like the perfect vacation spot for three New York professionals in search of sunshine, underwater adventure, and perhaps a little tropical romance. But when Eddie Bell, Eve MacFarland and Julian Carteret embark on an afternoon dive, they soon discover that still waters can run deadly. In this business suspense novel, three young professionals must use their wits, financial savvy, and the expertise of a band of unlikely and colorful characters to discover the truth and neutralize the threats…before it is too late.

Sharon Agar is a delicious writer with a gift for the utterly hypnotic twists and turns that put your day on hold. Out of Options is intelligent and propulsive—a suspenseful, sometimes funny novel about New York professionals slogging through the unexpected.

With dazzling realism, chess-like intricacy, witty dialogue, wry humor, and profound emotional insight, in Out of Options Sharon Agar marvelously and suspensefully fashions a skein of mystery, drama, romance, and corporate behavior that will not let go of you, long after you’ve turned the final page.

Sharon V. Agar grew up in England and came to the United States to attend Yale College and Harvard Business School. She has worked in investment banking and at large multinational corporations. She now lives in New York City.