Response-Able to the Incomprehensible 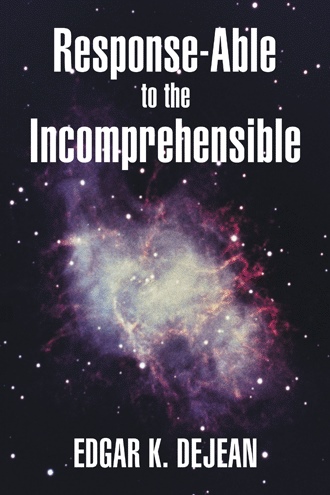 The primate evolved from animalism to humanism (millions of years) - the human from polytheism to monotheism (thousands of years) and the human has advanced immeasurably via both evolutions. Is it possible that some Incomprehensible Metaphysical Force/Energy is rendering value and purpose to these advances and has not completed the process? Yes, I believe this is possible! Although humans cannot comprehend the nature of this Force/Energy, simple anthropological evidence indicates that such a process is ongoing.

Why, then, should humankind accept that a theism designed by past and present cultures is the metaphysical goal of such an Incomprehensible Force/Energy?

My years in the 20th Century were spent achieving and expanding a Conditioned Belief System in the form of Orthodox Presbyterianism. Now in the 21st Century I find that searching is leading me to a more Candid Belief System - Candid as casual, flexible, logical vs. Conditioned as cultural, rigid, traditional. Conditioned and Orthodox are not negative words. They come to be detractors when they cling to practices that deter the metaphysical within an AWEsome existential that begs for the expansion of human enlightenment.

This book will explore the Possibilities within being Response-Able to the Incomprehensible Metaphysical Force/Energy through Spirituality and Compassion.

82. And Now in Conclusion

Within the Atmosphere of Possibilities a current mission statement for humanity might be:

The value and purpose of humankind is to be response-able to the Incomprehensible Metaphysical and responsible to and for the AWEsome Existential.

This is the end of this series of blogs and now begins the structuring of a third book within a trilogy. The first book, “A Belief System from Beyond the Box,” took us beyond the theistic orthodoxy of Christian Belief Systems to discern the metaphysical as the Atmosphere of Possibilities luring human histories upslope. The second book suggested “A Leap to Everyday Spirituality, In the Eternal Atmosphere of Possibilities,” as a way to morph Christianity to survival beyond mysticism and exclusivism, via spirituality and compassion. This upcoming book tentatively titled, “Response-Able to the Incomprehensible,” will be an account of one Possibilitist’s transition from the suffocation of theism to the Atmosphere of Possibilities.

The theme of my next Blog Series is hereby established and it shall be – “Life As a Possibilitist!”

I’m not sure what a Possibilitist is but I’m going to try it for several months and send readers reports as I go along – perhaps within the vein of a remark attributed to Mark Twain, “I have willed my brain to Cornell University. They are going to study it and send me a report.”

The final line of the Preface to this book stated:

“This book will explore the Possibilities within being Response-Able to the Incomprehensible Metaphysical Force/Energy through Spirituality and Compassion.”

Early in the book I reflected my theistic conditioning as I stated that: “God is the Incomprehensible Metaphysical Force/Energy that renders value and purpose to the all of existence.”

Of course this a theistic ambiguity in terms of: “God is indefinable so listen carefully as I define ’Him’.” By the end of the book I have arrived at greater understanding that the Metaphysical Force/Energy is truly Incomprehensible, and that theology – defining the nature of God – is a theistic thumb in the dike protecting religion.

Along the way I developed this formula as a directive to humanity:

God Is! Be Spiritual!

Life Is! Do Compassion!

The following would have been a bit unwieldy:

The Incomprehensible Metaphysical Force/Energy Is! Be Spiritual!

Life Is Possible! Do Compassion!

Although . . . We cannot avoid theistic language we can come to realize that humanity’s purpose/value is to respond to the metaphysical within the Atmosphere of Possibilities rather than within climates of theology.

For more than seventy years, author Edgar K. DeJean practiced a conditioned belief system in the form of Orthodox Presbyterianism. Now, in the twenty-first century, he explains how his searching and exploring of spirituality and religion has led him to a more candid belief system that is casual, flexible, and logical—as opposed to one that is conditioned, cultural, rigid, and traditional.

In Response-Able to the Incomprehensible, he delves into his mission, which centers on the possibilities within being “response-able” to the incomprehensible metaphysical energy through spirituality and compassion. Through a series of short essays originally created as blog posts, he describes this belief system he deems more appropriate and responsive to today’s times.

While studying the core beliefs and traditions of Christianity, DeJean focuses on explaining and defining the statement of purpose: be spiritual—do compassion. Response-Able to the Incomprehensible discusses the search for spirituality in everyday life and appraises and tests existing traditions and compassion in that same sphere.

Edgar K. DeJean spent seven decades of his life practicing the orthodoxy of traditional Christianity. He has come to believe that a more authentic belief system can develop within ever-expanding enlightenment. DeJean maintains an explanatory blog. He currently lives in Indiana.