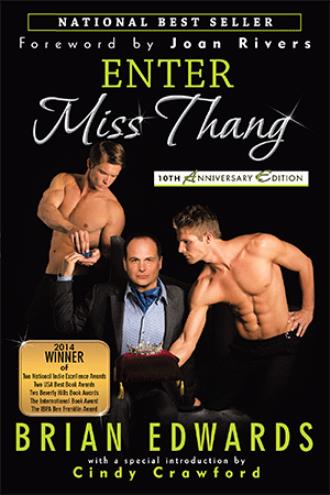 I'm sure more than one of you is asking, "Who exactly is this Miss Thang?" Or maybe even, "What in the hell is a Miss Thang?" Well, I'm happy to do my best to enlighten you.

Let's start off by saying he's a well-respected veteran in the field of celebrity client relations, a multi-award winning talent executive / producer, a writer and recently a Social Media Maven. That begins to sum up the business side of Brian Edwards.

On a personal level, add to that someone whose Southern charm, incomparable kindness, loyalty and unwavering support of the entertainment industry and those in it, is what places him notches above the rest. Now you have "the what and the who" but what about "the who cares?"

Having known Brian for many years (ok not that many honey!) I can say that aside from his loving and giving nature, perhaps his greatest asset (he always wanted a great asset) or should I say talent, is without a doubt his sassy sense of humor. Brian is funny as hell and for those of you who know him as I do, I'm sure we're all in agreement on that one. (Example: During his senior year, he sashayed into the guidance counselor's office at Covington High School to defend his self-proclaimed role of being a "black gal trapped in a white guy's body!")

For those of you who are new to Miss Thang, you are in for a rare treat. You will soon learn what his friends have all come to expect from him: which is basically that we have no idea what will come out of his mouth next!

Throw out any random subject and he can riff on it for hours. The result will assuredly be laughter--the kind that makes your side's stitch and your face hurt--something that we need more of in the world today. It's his sassy attitude (and yes, a little mince to his gait) that led me to christen him with the name Miss Thang more than ten years ago. But I'll let him tell you that story later on in this book.

His trademark is signing off e-mails, cards and letters as a different person each and every time. Some of my personal favorites are "Love, Dionne Warwick"; and "Love, Faye Dunaway." But at the end of this book, I hope he will simply sign it with Brian Edwards, because there's only one, and I am proud to call him my friend.

Love,
Cindy Crawford
a.k.a. Miss Jackson if you're nasty! 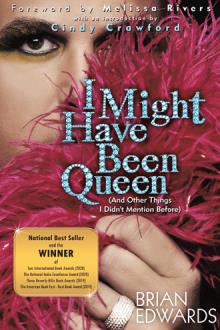 Brian Edwards may be a celebrated talent executive, multi-award winning producer, writer and occasional performer, but to friends such as Cindy Crawford and Whoopi Goldberg, he is known quite simply as Miss Thang. The late, great Joan Rivers wrote the foreword and Crawford penned the introduction to his recent autobiography, “Enter Miss Thang,” (published by Archway Publishing) which became a national best seller and ends the year as the most honored LGBT Non-Fiction Book of 2014.

“Enter Miss Thang” received top honors for Best Humor and Best Gay & Lesbian Non-Fiction at The USA Best Book Awards, (presented by USA Book News), which rounded out the current book awards season, where Edwards also earned a total of ten national and international awards in various categories such as Humor, in addition to dominating the field of LGBT Non-Fiction with wins at The International Book Awards, The Beverly Hills Book Awards and The National Indie Excellence Awards, where it was also named Best Autobiography of the Year.

"Brian is the perfect example of a true friend—and to so many. Enter Miss Thang is his story, filled with humor and passion for his work and the people he loves the most. A diva indeed, but it's a title he's definitely earned by managing to survive almost thirty years in Hollywood, cushioned by intelligence, flamboyance, gut instinct, loyalty, and, most of all, his sense of humor."
—Vanessa Williams, multi-platinum recording artist and star of stage, television, and film

"In this book, Brian Edwards sets an example of giving and commitment that creates a standard for all of us to follow as to what a friend should truly be. I'm so proud of his life and legacy."
—Sam Haskell, former worldwide head of television at the William Morris Agency

"Brian Edwards is my favorite diva of all time. I have worked with him on many Hollywood Walk of Fame ceremonies, which have given us both tears of happiness and tears from the laughter he brings out in me when working on these legendary events."
—Ana Martinez, producer for Hollywood Walk of Fame

"Brian is one of the kindest, funniest, and most supportive people I have ever had the pleasure of meeting. He always takes good care of me stateside, like my fairy godmother! It's clear to see just how treasured, loved and respected Brian is and deservedly so."
—Matt Cardle, multi-platinum recording artist

"Having gotten to know Brian over the years I have come to realize his own personal story is as interesting as those of many of his famous friends and clients. He's fiercely loyal, outrageously funny, and generous to a fault."
—Pam Tillis, CMA and Grammy Award–winning recording artist

"Enter Miss Thang encapsulates more than a man's wild and wonderful adventures in Hollywood, but reveals a dynamic and brilliant colleague and friend with a zest for life and all things fun and fabulous."
—Mirjana Van Blaricom, president of the International Press Academy

"I have known Brian for almost twenty years. His enthusiasm and support of talent in this industry is incomparable. No one even comes close! He's also a dedicated friend who has always been there for me and so many others, when it truly mattered the most."
—Ali Landry, actress and spokesperson

Louisiana native Brian Edwards has enjoyed a successful career in the entertainment industry as a celebrity talent executive, producer, and writer. Over the past thirty years, he has worked with such celebrities as Joan Rivers, Donna Summer, Vanessa Williams, Cindy Crawford, Susan Sarandon, Shirley Jones, Naomi Judd, Pam Tillis, and Whoopi Goldberg—just to name a few. Brian served as talent executive and talent producer for three Emmy Award–winning shows; in 2012, he was honored by the International Press Academy with the Satellite Award for Outstanding Contribution to the Field of Entertainment, becoming only the third recipient of this honor in the academy’s history.