The Story of Meghan Redenbach: The Teenage Girl Who Showed a Community How to “Man Up” in the Face of Cancer 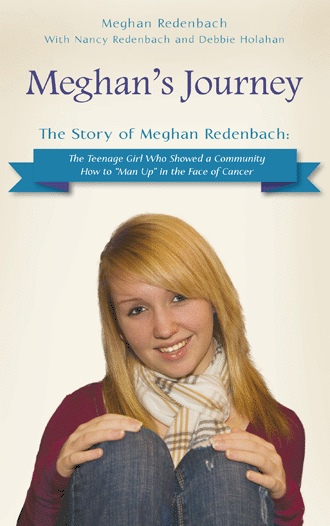 Meghan Redenbach was thirteen when she was diagnosed with fibro sarcoma, an extraordinarily rare form of ovarian cancer. At the time her tumor was identified, she was one of the thirty documented cases in the United States, and only one of two children. Her physical life came to an end on Christmas Eve, two years after her initial diagnosis. The story of Meghan prior to these events is special, but the tale of those last two years is nothing short of remarkable.

This project came about because Meghan decided she wanted to write a book. It actually began in ninth grade with her English teacher, Christopher Schaus. The class was reading The Outsiders by S.E. Hinton. Meghan loved that book, and loved even more that Susan E. Hinton was only seventeen when her novel was published. Meghan announced to Chris that she had a story to tell, and she thought she should write it. With his encouragement she began with small narratives and completed four of them, but Meg got sidetracked as she completed what appeared to be a second successful cancer treatment during her ninth grade year. There was club volleyball through the winter, a fifteenth birthday in spring, family trips to Walt Disney World and Hawaii, and two volleyball camps that summer. She got busy living the life she loved.

I began meeting with Meghan in August prior to her entering tenth grade; I was to be her English teacher that year. I had been a peripheral part of Meg’s life through volleyball; my husband, Bill Holahan was her coach and my step-daughter Erin Snyder his assistant and Meghan’s setting coach. She was now beginning her third and final battle. It wasn’t long after I began working with Meghan at her home when she turned her head and looked at me with her wide, expressive, beautiful eyes and said, “I want to write a book. Will you help me?” She wanted to keep it a secret, a surprise for her parents. I wish we had had more time; she had warned me that there wouldn’t be a lot of that, but I didn’t want to believe her. She had given me her completed writing, we worked on an outline together, she dictated ideas as I typed, and she passed along to me last minute thoughts through her psychologist and social worker at Roswell Park Cancer Institute. It has been very overwhelming, to say the least, but I promised Meghan I would work with her parents and finish her book.

You might imagine that the story about a fifteen-year-old girl dying of cancer would be considered a tragedy, but the word ‘tragedy’ is defined as having a sad ending with themes and circumstances concluding in a heartbreaking downfall. That is not to say that Meghan’s death was not sad or heartbreaking; it was unquestionably both. However, what came after her death has been uplifting, inspiring, and healing – nothing that could be remotely close to being considered tragic. Meghan displayed unimaginable courage in her efforts to comfort those around her rather than feel sorry for herself. This is the girl who told her father to “man up” in the dawn of her diagnosis. Through surgeries, radiation, and chemotherapy she continued to demand the best from herself while insisting that everyone be kind to each other. Before her untimely passing on Christmas Eve, Meghan arranged for a family friend to buy gifts for her parents and brother. As her closest friends held small gatherings around her bedside during her final days at Roswell Park, Meghan led a lively rendition of “Ain’t No Mountain High Enough”.

Meghan’s book has taken a direction quite different from the one she had originally envisioned, but I believe it is one she would have undoubtedly approved. The heart of the book is now the journal of Meghan’s mother. Nancy kept it in order to keep track of medications and document information from doctors, but it gradually shaped itself into an extraordinary story. For anyone who has struggled through life’s difficult challenges, inspiration can be found in these pages. Together with her daughter’s writing, Nancy has fulfilled Meghan’s original goal: to write a book that might help others.

As I prepare this introduction there are still no adequate words to express how this experience has changed my existence – not so much working on her “secret project” – but just having been a part of Meghan Redenbach’s life. I am so grateful that she drew me in to become part of her family and share the journey that can only be described as the ultimate paradox: every minute spent with Meghan was so beautiful, even in the presence of such cruelty that is cancer. But that was one of those things she passed along to me – at her ten-year class reunion she did not want to be remembered as the girl with cancer. I hope she knows that she won’t be; she will be remembered for her courage, her kindness, her exuberant love of life, and the lessons she has taught us all about how to live and make the most of every minute.

Why This is Something I Want to Do…

When Meghan began her “secret project” of writing a book, I asked her why this was something she wanted to do. These are Meghan’s words from late in October of 2010.

I never thought I would want to write a book, but now I do. I am fifteen years old, and I have cancer. I am currently experiencing my third battle. My community has reached out to me to help me get through this. Some people tell me my experience has helped others get through tough times. I thought if I just reached back to give something - if I wrote a book I might be able to help many more people.

This all really hit me when I was sitting in English class last year – my freshman year of high school. When we were reading The Outsiders by S.E. Hinton and seeing how her book really kind of changed things – I figured I could do the same. At this time my cancer had come back a second time. It was funny how I just accepted it. I was still really angry and pissed off – but I accepted it and knew I had to do whatever I had to in order to get through it. One day I was just sitting there and the thought occurred to me – I should write a book.

The support I got from my friends, family, school and community was overwhelming. People said I gave them inspiration. I was in awe of the idea that people thought of me as a hero and roll model and the strongest person they ever met. I thought to myself “how is this possible – I am fifteen.” I don’t know how to be somebody’s hero or anything like that.

For me – I really didn’t want to talk to anyone who was going through what I was going through. It seemed to me if I talked to other people who were suffering with cancer, it would make me face more of the reality and how much sickness there was. If I imagined it was just me I didn’t have to look at the kids who were five years old, crying and screaming when they had to get their blood drawn. I could blank it all out. I didn’t want to believe that people had the same sadness as me – especially kids – I wanted to be positive. I saw a little boy running the halls of the hospital with his IV – that’s what I wanted to be – without a care in the world.

I am told that I could give someone else strength – someone who is going through a rough time – I don’t know. My parents tell me I am the rock in the family and hold everyone together.

I don’t know what people think or what they take from me – as long as it is something good.

Meghan Redenbach was thirteen years old when she was diagnosed with fibrosarcoma, an extraordinarily rare form of ovarian cancer. At the time her tumor was identified, she was one of the thirty documented cases in the United States—and one of only two children. Her physical life came to an end on Christmas Eve, two years after her initial diagnosis. One of her goals was to write a book so she could help more people.

Meghan’s Journey tells the story of her life, her diagnosis, her treatment, her death, and the powerful support of a community, friends, and family. This memoir combines Meghan’s words with journal entries her mother, Nancy, made throughout the journey, showing Meghan’s remarkable strength and courage in the face of illness. Evident throughout are Meghan’s kindness, her exuberant love of life, and the lessons she taught about how to live and make the most of every moment.

An emotional, true story, Meghan’s Journey serves to inspire others and give them the strength, hope, and the courage to confront life’s seemingly insurmountable challenges.