Fear Is the Root of All Evil 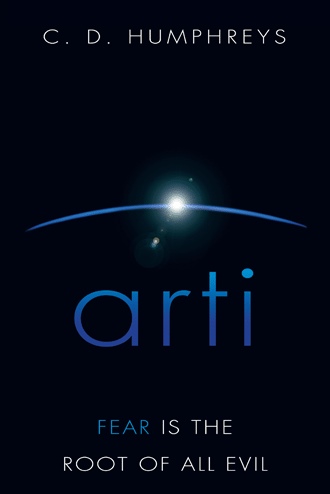 “In this very room, one hundred and ten years ago today, the legend of Arti began. No one knew for sure how he came to be with us; even he could only speculate the possibilities. But the Arti we came to love and respect, revealed himself to William Artimus Coleton while he was working on an experimental, biological computer.” A white haired gentleman spoke as he stood with his cane in hand, in an old cinder block basement. The room had no windows and wasn’t very large, only a few chairs around and almost everything was covered in glass. A small group of pilgrims waited in silence for the old man to continue. “My youth is long gone, but even in old age I do have one thing left. Telling stories … stories that were passed down from my father and my grandfather. Oral traditions date back to the first words shared between two people. I’m not talking about words written in books or for movies; I’m talking about someone sitting with another or in front of a group and giving their own reflection of a personal experience passed down through generations. It seems more personal if the story teller just narrates from his own memories and emotions. The written word can have great power but the sounds of a human voice with all its emotions, has always had more of an impact on me. I believe that Arti would agree.” “Let me tell you the story of someone hundreds of books have been written about and many narratives told. So many movies and plays were created in his name and countless studies have been made of his short time with us. Some religions were even built around his teachings, and philosophies. Many called him a living machine, an Artificial Intelligence, some called him the next step in man’s evolution and there are those who called him God or Messiah. I imagine him as an enlightened being not restrained by the fears society imposes on us. However you come to see him is completely up to you, I believe the only thing he would ask of you is … to decide for yourself.” “Arti’s was a uniquely curious and imaginative soul, searching for meaning, and discovering more than even he thought possible. He never saw things in ways the rest of us do, without others telling him what to think or how to live he was free to discover the difference between truth and deception for himself. Other people’s versions of right and wrong were seen by him as merely opinions and not conclusions.” “He was never told ‘that’s impossible’, so nothing was. His discoveries influenced every part of society from science to agriculture and religion to politics. His advancements in technology and physics opened up a whole new world of possibilities. Arti’s concepts of philosophy opened millions of minds to his unique view of humanity. He offered mankind the wisdom to think for ourselves and gave us hope for the future. “A hundred years ago, there were many Countries with many forms of Government. Some leaders were selected in a peaceful way, by the people who believed that they represented the most promise for their future. Not always getting what they expected, at least the right to vote was there’s. Many were forced with the threat of violence, to accept the ruler in power without question.” “Arti suggested a better way to run things and left us guidelines to create one Global Country with no single ruler. The world is now overseen by nine heads of state and allowed only six years as leader. Once they’ve reached that top spot they can no longer hold public office. All nine states must follow a basic set of ‘human rights laws’ and other guidelines concerning those rights, but most other daily functions of government are laid out through individual ‘States Rights’.” “Arti’s exceptional persuasiveness created a level of peace that most believed would never be achieved. So far his vision of a more peaceful and unified world has come to make us all stronger and wiser.”

Bill, a young prodigy working to create the next step in computer technology, is unhappy. His current project is, by his definition, a failure—but perhaps that’s a premature indictment of his efforts. Bill will soon learn that, even in failure, wonderful things can happen. On the day that Arti appears in Bill’s basement—with no knowledge of who or what he is—the engineer assumes that Arti was “born” during the brief life of his failed biological machine experiment. Soon, Bill realizes that Arti absorbs and processes information faster than any computer Bill had ever known. Bill, who lost both parents at a young age, adopts this infant-consciousness freeing Arti from societal brain washing. Now open-minded and fearless, Bill mentors this new life without placing limitations on who Arti should become or what he should believe. Without the need for sleep, no stone is left unturned as he devours all the information he can find on philosophy, mythology, religion, psychology, politics, and art. Bill is in for a surprise when Arti explores humor—by converting Bill’s home into a haunted mansion. When Arti learns about war, however, he is stunned by the unimaginable violence humans can inflict. He struggles to comprehend his profound anger and, on the path to understanding, concludes that fear is the root of all evil. He then sets his considerable intelligence to finding a solution. During his short time with us, this fledgling being grows from child to adult, from student to mentor—and his final sacrifice will inspire humanity forever.

C. D. Humphreys has spent over thirty years exploring his interests in photography, the culinary arts, and writing short stories and poetry. He expresses himself via pencil portraits, music, acting, singing, and dancing. Arti is his first novel. He lives with his wife, their three children, and three pets in Pittsburgh, Pennsylvania.