Building a Glass House in Russia 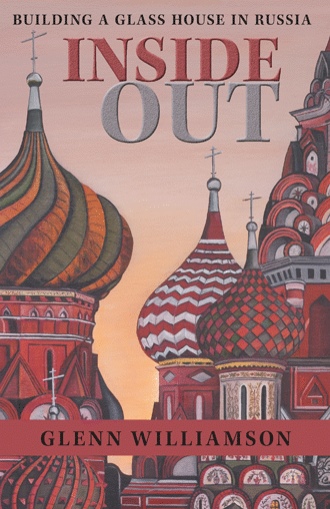 “Fifty Years of Nodortechnadzor” the banners proudly proclaimed. I could almost hear the people singing their eternal praise. Russians love anniversaries. Five, ten, fifteen, and especially fifty years were a big deal. I had seen the banners and read them, as I tried to read all of the various slogans left over from the Communist times, as well as announcements of coming events. One juxtaposition was classic. “Now greet Soviet Communism!” proclaimed one rooftop sign, while the matching sign on the adjacent building said, “If you smell gas, call 311.”

Kleptov and I were both still a little hung over as we walked down the sidewalk. The weekend before, Kleptov’s son had married his American fiancée. They had held a nice reception at a restaurant on Krasotsky Prospect, of course. The evening had gone on merrily and ended with two vivid images. One was of Kleptov, lying on his back and held in the air on a makeshift scaffolding created by the straining arms of several of his friends, so he could sign his initials in the ceiling with a cigarette lighter. This was clearly a local tradition at the restaurant. He was merely adding his initials to the others already there. The other image kept bothering me in the back of my mind. One of my staff had walked out of the reception with a bottle of vodka for the road. Not a good sign, I thought, when you leave a Russian wedding needing another drink.

Kleptov and I were on our way up the stairs to another dingy government office. We were responding to an official letter we had just received, informing us that, basically, we were in big trouble.

“Your boiler was imported without the proper authorization,” the official informed us. “You do not have a design for your boiler and your boiler has not been properly tested. It cannot be installed until it has been properly designed and tested. Vsyo. (That’s all).”

These conversations always scrambled my brain, because I would translate the words literally as they were spoken and then they never made any sense. To me a design was only needed to guide the construction of something that had not yet been built. Our boiler was not only manufactured, it had already been installed on the fourth floor of our building, underneath the fifth floor and the roof.

“Why do we need a design for something that is already built?” I asked.

“Because you don’t have one.”

“Why can’t we show you the plans that the Finns used to actually build it?”

“Because you need a Russian design.”

Here we go, I thought. “Okay, which Russian designers are available for this task?”

“As a matter of fact, we have an affiliated private design firm that works with our public office and can complete this task.”

“Who runs this firm?” I asked.

I couldn’t even laugh. We were behind schedule and were pushing the Turks to catch up. Without an approved boiler we couldn’t do lots of things. Like heat the building. This meant that not only could we not open for business, we’d have to keep using portable heaters inside so that we wouldn’t ruin the finishes on the plaster and drywall. Summer ends quickly in St. Petersburg and we needed heat.

“So you’re telling me that if I hired your private firm, you could get me the approved design I need.”

“I can complete the design, but then it needs to be formally approved.”

As a child I had seen a skit once on The Carol Burnett Show, in which a tourist tries to appeal his speeding ticket in a small Southern town where the cop, judge, and mayor are all the same person. But in the skit, those three people all work in unison. This schizophrenic official was trying to maintain the independence of each role.

“What if we don’t redesign, or design po-russki, the boiler that is already built?” I asked.

“Then you have to have it tested, but you can’t test it in my city. It’s not safe, and once a boiler blew up and killed people. I have responsibility for the safety of the citizens of St. Petersburg and I won’t allow you to do this.”

How noble and inspiring this conversation was becoming. “The boiler is built into the fourth floor of our five-floor building,” I said. “How can we test it outside of St. Petersburg?”

“You can cut a hole in the roof and get a helicopter to carry it to Finland, test it, and bring it back.” He said this with authority and seemed convinced of its logic.

“Maybe it could work,” Kleptov suggested.

Oh, my God, not now, I thought. This was worse than a bad TV comedy, and I knew Kleptov was already focusing on the deals he could make with the helicopter company. Absolutely insane.

“We cannot cut a hole in our roof,” I said, “and we cannot decide this question today. We need to speak with our contractor to see what can be done about the testing and the design.”

“Very well,” the official said. “I will wait to hear from you.”

In Russia, it is said, “Nothing and everything is possible.” In Inside Out, author Glenn Williamson explains the award-winning development of St. Petersburg’s first modern Class A office/retail center by a multinational team of Americans, Russians, Brits, Turks, and Finns.

Inside Out provides a fascinating memoir of his experiences working as a developer in Russia in the 1990s while balancing a home life with a new baby son. With unique and astute anecdotes, it offers insights into Russia, its people, and its culture.

Inside Out, funny and serious, sincere and sarcastic, narrates the anatomy of a real estate deal. Now, at a time when America and Russia consider ways to reset their relations, Williamson’s story shows how actual players on all sides of a complex business and personal adventure looked for, and ultimately found, a common language.

“If you ever wondered what a developer does all day – especially one developing in Russia – all your questions will be answered by reading this fascinating story.”

Glenn Williamson learned Russian at Exeter, Georgetown, and Leningrad before earning a Chicago MBA. After the Berlin Wall and Chicago office markets both fell, he took on new developments in Eastern Europe. Williamson lives in Washington, DC, with his two sons and teaches real estate at Georgetown University.