Growing Up by the Chacon Creek and Other Memories 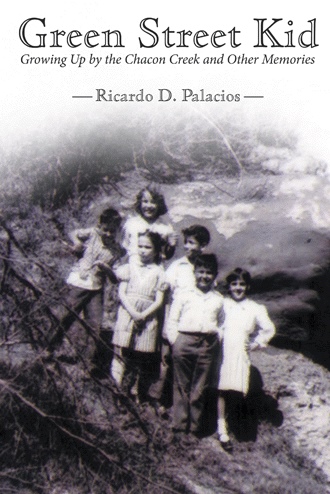 One of the long time Fansler clients was George Link. I had met his brother Louis, and his wife and family, because they lived across the Chacon Creek from us. They had about ten children, and the one our age, Johnny, came to visit and play around the Creek with us. He sold Grit, the newspaper, and my mother gladly bought a copy from him once a month. He joined Jimmy, Tete, and a new addition to the gang, a new neighbor, Johnny’s cousin, Charlie Leyendecker.

As young pre-teens, Jimmy, Tete, Charlie and Johnny were shocked to hear of the horrible accident that George Link and his wife Virginia had suffered on Lake Falcon about an hour south of Laredo by Zapata, Texas. All we knew at the time was that another boat had flown over them, clipping George’s skull off, and butchering his wife, Virginia’s face. For months Laredoans monitored news stories on the accident. Eventually they recuperated, although Virginia’s face was disfigured.

George Link was born and raised at the Link Ranch just east of Encinal, Texas, but when he grew up, he decided to move to Laredo and seek a better living. Eventually the whole Link family moved to Laredo or other parts of south Texas, but they had a big ranch near Encinal, and even had a Ford Automobile dealership in Encinal, Texas. I knew none of this when I met him at the law office.

George eventually got into the butane-propane business, became very wealthy, and bought a 1200 acre ranch just south of Laredo. He remodeled and expanded a very nice Spanish style residence, and had the usual outer buildings that go with a ranch house.

Since old Mr. Fansler had died, Chuck Fansler took over as George’s attorney. I used to see George and his sons come in to see Chuck and Morris. I had seen the sons at bars, but not gotten to be good friends. One day, Morris Reese told me that he was sick and was supposed to go to court with George and his sons. Turns out they had a boundary dispute with a neighboring rancher. The neighbor had a sliver of land right in the middle of the Link Ranch, and although the Links had the right to drive through the sliver to get to another part of his ranch, the neighbor shut and locked the gate, making use of this short cut impossible.

Chuck and Morris had filed a lawsuit to try and straighten out the situation. Reluctantly, and preparing hastily, I went to court and I got everything I wanted for the client. Later I discovered that the trial judge was a good friend of George’s, and frequently went fishing at the Link Ranch. Don’t know if it affected his rulings, but certainly did not hurt.

Because of the courtroom victory, George’s son, George, Jr. invited me to his wedding two weeks hence. George, Jr. had established an oil field water truck company in Laredo, named Crystal Well Service, and had achieved a degree of success and was one of Morris’ best clients.

I attended the wedding at the Link Ranch, and there met all of George’s family, his wife Virginia, his other sons Mike, and Jim and his daughter Liz. I met Mrs. Link’s brother Chick Rives, and his wife Edna, and their children Chick, Jr. and Andy. It was July, 1976. I was 32 years old. I met George Jr.’s fiancée, Jo Ann, a beautiful blue eyed blond, and I watched as Justice of the Peace Alex Santos married them.

And then lightning struck, I met the youngest of George’s children, his daughter Catherine, whom everyone called Cata, another gorgeous blue eyed blond. I was thunderstruck, I fell in love immediately. I danced with Cata all night long, and we got to know each other, much to the chagrin of her date, who just sat on the sidelines and watched. Later that evening I had an argument on a technical point with the Rives boys. I forget the exact topic of the debate, but we were the center of attention. Everyone surrounded us as we argued back and forth. Later, Edna Rives would call that evening the evening of the Bourbon Debate.

I called Cata the following Monday and found out she lived in Austin, and had returned, but would be back in a week. A week later, she returned to Laredo, and that became the beginning of a whirlwind courtship. In about two months, we were engaged to marry. I went across the river to Russell Deutsch’s store where I ordered a diamond ring, and custom made wedding bands. The gold wedding bands had a white gold inlay of the infinity sign. The infinity sign had a break in it, to signify the end of our relationship, in anticipation of death, someday. I designed the bands and Russell created them. We finally said our vows on October 24, 1976 at Blessed Sacrament church with Monsignor George Gloeckner officiating. My brother Abe was my best man, my grooms men were Morris Reese, Jimmy Battaglia and Arturo Volpe. Cata looked beautiful in a long white wedding dress. I was 32 years old, Cata was 22 years old.

We spent our first night together at the La Posada Hotel where we had the reception. Father in law George was part owner of the Hotel. Needless to say, it was fantastic, with the best of everything. The following day we drove in the yellow Bronco to San Antonio, spent the night at the La Mansion, and left the following morning on a long flight to Hawaii on our honeymoon. It was a Link family tradition that father in law, George “Poppo” Link, paid for the trip. We spent four days and four nights on the island of Maui, and four days and four nights on the island of Kauai. It was beautiful. The weather was cool, the water bluer than blue, the jungle scenery fantastic. What struck me most unusual was the air conditioned weather, always constant, without the need for air-conditioning. The hotel lobbies were open aired, no need for windows, doors.

When we returned, we lived at my apartment, a two bedroom job, in the Heights area, until we could buy a small house. We bought the house from David and Patty Guerrero. David had been in the men’s clothing business, but his business had failed, so they were leaving town. The house was a modest three bedroom two bath house with a very nice back yard. It was at 2416 Plum Street. My father in law, Poppo, let me know quickly that he did not think it was much of a house. By this time, my brother in law Mike and my sister in law Liz had already built very nice big homes on the Link Ranch, and Poppo wanted us to do the same.

The law practice moved along. Chuck, Morris and I got along very well, and as time went on we got to know each other better and better. I found out that Chuck and his wife Lorraine were alcoholics, and drank excessively every night. Morris and I were younger and could hold our liquor better, but we were also drinking more than was good for us.

My clientele grew slowly, and I began making more money. I was working on a very large project, and one night I had to return to the office to work on it. I had taken Cata’s four door Pontiac. I worked for about three hours, and then went outside to get in the car to drive home. Some vandals had cut two tires on the car and both tires were flat. I called Cata and asked her to come and get me. We drove home in the Bronco.

I knew that Chuck always got to the office at eight, so about seven thirty, I called him and asked if he could come and get me, and give me a ride to the office. He said he would. I waited until about eight thirty, and he still had not come by, so I called him, and he said he was running late. I waited until about nine thirty and called him again, and he said he was on his way. Finally Chuck showed up at ten thirty. I figured he had a personal problem so I did not ask him why he was so late.

Growing up on Green Street in Laredo, Texas, Ricardo Palacios made the wilderness his playground. The woods, the nearby creek, and the vastness of Chacon Creek Canyon transported him and his young friends away from the strife and poverty of the barrio and into the splendor of nature.

Looking back on his life, Palacios reflects on seventy years of memories—from his birth through his days at the all-male St. Joseph’s Academy Catholic school, capturing the powerful camaraderie he shared with his classmates and his experiences playing high school football. He next takes a hard look at his college years, during which he flunked out twice before finally making the commitment to graduate with honors and obtain a law degree.

Palacios places his life experiences under a microscope, sharing periods of heavy alcohol use, very stressful years as a rookie attorney, and tales from the trenches about the pitfalls, successes, and failures of his legal practice. He describes his twenty-eight-year marriage, pondering how and why it failed, and tells of wonderful years raising his children on a cattle ranch, with plenty of opportunities for hunting and camping.

Green Street Kid is more than the story of one man’s life. It is a portrait of the life and culture of South Texas, where the majority of the population is Hispanic and conflicts sometimes develop between Hispanics and Anglos. It is a story of falling down and rising up again.

Ricardo D. Palacios was born in Laredo, Texas. He attended and graduated from St. Mary’s School of Law in San Antonio, Texas, earning a doctor of jurisprudence degree in 1970. Palacios is the proud father of four children, all of whom have graduated from college. He is a retired oil and gas attorney and lives on his ranch near Encinal, Texas.