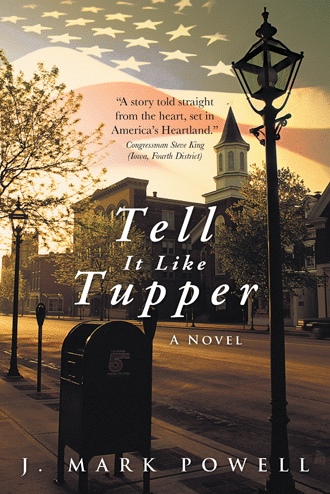 The last normal day of his life began like any other Thursday. No blinding shaft of light flooded down from heaven, no ominous sign pointed to momentous events about to unfold. There was only a clock radio from Sears that roared to life at six forty-five, shaking him awake by blaring an old Randy Travis song playing on an AM radio station.

Glenn Tupper swore as his eyes stayed closed. He had hit the snooze button twice already. He couldn’t delay getting up any longer. His feet flopped onto the cold hardwood floor, and for the hundredth time he regretted not carpeting it like his wife had asked him a hundred times to do.

Twenty chilly minutes later, he was showered, shaved, dressed, and following the sizzle of bacon coming from the kitchen. Debbie was standing over a gas stove, flipping the strips with a brown plastic spatula.

He leaned over to kiss her, but she turned away so fast his lips only brushed her cheek. She isn’t over it yet, he thought as he poured coffee into a tall thermos.

“Amber’s got that music thing at school this afternoon,” she said without looking at him.

“I remember.” Glenn screwed the lid onto the thermos and let a chatty morning news host sitting in a TV studio in New York fill the space between them with tips for planning a spring garden. He watched the woman, good-looking and blonde with the help of a bottle, and then glanced over at his wife’s back. Even in her flannel bathrobe as bright red as Santa’s suit, her morning hair sticking in every direction like a compass gone mad, and lost in a sullen anger she clung to like the sole possession pulled from a burning building, he loved her.

“Bennett’s got basketball practice tonight, too. You promised you’d pick up the boys this time,” came from the far side of her shoulder.

He walked over, put his left hand on her arm, and grabbed a piece of bacon off a plate with his right.

“It’s Daddy’s now,” he said between crunches. He tried to snuggle against her neck.

Glenn sighed in surrender. He put on his plaid coat and picked up the thermos. “See you tonight, I guess.”

At last his wife faced him. He tried to find some hint in her eyes, some slight suggestion that the thaw had started. “You need a new coat,” she said, returning her attention to the bacon.

Glenn wiggled his fingers into thick leather gloves. “This one’s still got one more winter in it.”

Dry snow crunched beneath his boots. When he reached his silver Ford F-150 pickup truck, he took a small broom from the passenger side of the floor and brushed the fresh snowfall off the windshield. Once inside, he had to turn the key several times to get the engine started. He needed to replace more than his coat, he thought as he backed into Chestnut Street.

The big truck moved slowly, carefully avoiding patches of ice hidden beneath the latest dusting of snow. The sun was edging above rooftops now. He saw another pair of tire tracks. He was usually among the first people to break the freshly fallen snow each morning.

It felt good, inching along in no particular hurry, seeing the yellow glow of kitchen lights as dozens of families prepared for the day just as he had done. For a handful of minutes each morning, he and Creston shared a special relationship, a hidden moment when he watched the little town shake off its slumber and come to life.

Within minutes, he turned onto Adams Street and passed an old two-story train depot with a tall, red tile roof that now served double duty as Creston City Hall. This was downtown; blocks of brick buildings that had stood here since Woodrow Wilson was president.

The truck bumped as he rolled over the railroad tracks. Now he was on Highway 34, “the highway,” townsfolk called it, where the cookie-cutter commercial bacterial growth that was the backbone of suburban America had finally reached his little town. If it was franchised, had lots of lights, and needed a big parking lot, it was located here.

Two minutes more and a teenage hand passed him a cup of hot coffee from a drive-through window. He sipped deeply, gratefully, and thought it ironic that McDonald’s had the best coffee in town. The thermos filled with Debbie’s coffee was always saved for later in the day. The young hand passed an Egg McMuffin through the window, and soon the truck was moving again. He retraced his path back to downtown, then a few blocks east to Mills Street, pulling up in front of a brick building with a sign saying “Sunshine Small Engine Repair” over the door.

He switched off the ignition and stepped down into the snow. He didn’t bother locking the truck door. In Creston, you only locked a car or truck door when you were leaving town for the weekend.

With the thermos under one arm, the cup of coffee in one hand, and the half-eaten sandwich in his mouth, he pulled open the front door. The smell of propane gas from a space heater mingled with gasoline and oil from a dozen engines opened and scattered around the room. A tall, thin form dressed in brown coveralls was already bent over one of them at a workbench in the corner.

“Morning, Bobby,” he said as he set the thermos and paper cup on the top of a cluttered gray metal government surplus desk.

Bobby gave a wave with his free hand as the other fumbled inside a motor for a screw. Already the white stick of the day’s first Tootsie Pop was poking out from his mouth. Glenn knew Bobby’s pockets were full of them. By five that afternoon, Bobby would have gone through at least ten, maybe twelve. Cherry was his favorite flavor, but he wasn’t picky. The fact that his teeth weren’t riddled with cavities was nothing short of a dental miracle.

Glenn made himself comfortable in a chair with a cracked green vinyl seat ripped down the middle like the San Andreas Fault and opened the morning edition of the Creston News Advertiser. The smart people read the bigger paper from nearby Osceola or the state’s leading paper from Des Moines. They may offer more depth, but they wouldn’t have anything about the teenager who downed eight cans of beer and plowed into a grain elevator out on the highway last weekend, and they surely wouldn’t tell you which friend’s baby had just arrived or whose child had made that quarter’s honor roll at the middle school. That was real news in Creston.

But the pile of invoices that was rapidly growing on one desk corner could only be put off so long, and Glenn finally pushed the paper aside and got down to work.

At midmorning, the phone rang with the day’s first bit of new business.

“I’ve got to run over to Red Oak,” Glenn called to Bobby as he shoved his arms into his coat. “Old Man Beck’s corn feeder is conked out again. He’ll pay me extra to come over and fix it. Keep an eye on things till I get back.”

The white stick in Bobby’s mouth bobbed up and down as he nodded his head.

Glenn grabbed his keys, picked up the thermos of coffee, and headed back to his truck, unaware of what was waiting down the road.

A car breaks down on a snowy road in rural Iowa, a passerby offers a ride, and a friendship is formed that will launch one man on the path to political greatness while unwittingly driving the other into the national spotlight and pushing his family to the brink of disintegration.

With this chance meeting, fate intertwines the lives of Glenn Tupper, a small engine repairman who lives a quiet life in tiny Creston, Iowa, with Senator Phil Granby, a presidential candidate whose campaign is a spectacular flop. When Granby departs from his prepackaged message and starts using Tupper’s practical sayings, his political fortunes make a dramatic turnaround. But Tupper finds that even unsought fame comes at a painfully high price when a sinister force exposes a dark family secret that he did not know. Now it is up to Jarma Jordan, a quirky young blogger, to discover the hidden answers that could save Granby’s campaign and rescue Tupper’s family from ruin. But will her efforts be too little, too late?

In this intriguing tale, the chain of events builds to the eve of New Hampshire’s presidential primary with a candidacy -and one man’s future- hanging in the balance.

J. Mark Powell is a Missouri native, former broadcast journalist, congressional aide, and political campaign operative. During his news career, he reported everywhere from the county courthouse to the White House. Powell currently serves as communications director for South Carolina’s attorney general. This is his first solo novel.