The Mysterious Story of Gitano Cervantes 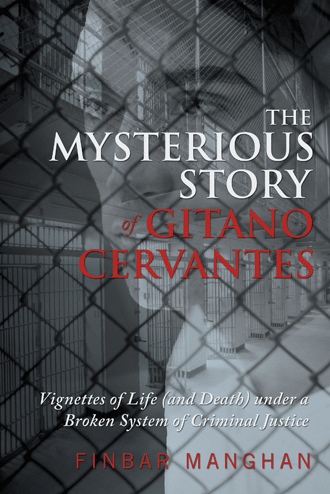 “May 31...that was store day, I put the commissary in the locker and went to RCIA [religious instruction], but when I returned my cellie had destroyed everything, broke my radio and hot pot into pieces and flushed all the commissary and cut the clothes, boots and shower shoes with a razor blade.” When the Sgt. came, he started to curse and told them if they “didn’t get along he would write a case and lock us up.”

The same night, Gitano received another letter from his sister in El Salvador saying his mother was going to undergo surgery and she thought she would die. He also received a “kite” from his friend (whose nickname was “Psycho”) in LOP (Loss of Privileges—a kind of lockup) asking desperately for help with hygiene (soap, toothpaste). Gitano had just purchased some items for him from commissary, but they were among those flushed down the toilet by his cellie.

It was against this background that Gitano began to write about the activity in [the Swest city].

“I knew this place through a fifteen years old kid….One day I met in an auction in [ ] two young men from Columbia who bought cars in the auction, fixed, then sold it [sic]. They asked me if I could go to their place to fix some cars which needed some small repairs like alignment and brakes…. Soon I became friend of the whole family and I invited [to dinner] the youngster whose name is Enrique Torres, by then barely had turned fifteen….He told me he was kidnapped in Costa Rica while he returned from school and brought to [ ] in a privated plane with fourteen more kids, all of them with their eyes bandaged. Only he was left in [ ], others went to [several cities in the U.S. cities and Canada] (sic; the imperfections in Gitano’s grammar/spelling are presented as he wrote them, except for some of the punctuation). He said he was taken to a big house located in the outskirts of [ ]. There were ten more kids from different countries like Russia, Romania, Albania, Bulgaria—even China. That place was patroled by a privated police 24-7. Before they were taken to the whore house in downtown [ ], they were compelled to a series of tortures and doses of drugs to erase the memory. He said that of all the kids who had been brought to that place, no one has ever escaped, all of them after two or three years die and are cremated.

“The torturer [his guard]…expressly told him that he was in love with him [apparently the boy was unusually handsome] and he would spare his life by telling him how to fake as if he had taken the drugs that erases the memory. In exchange for everything, he did everything and gave that man everything he wanted from him.

“He was taken to that place when he barely had turned thirteen and managed to fake as if he was brainwashed for nine months only. He was appointed as the lover of a man who is well known in [ ]. He told me his name that I don’t want to mention for my own security here—here [the Unit “X” unit] die people almost every day; all of them say that committed suicide.

“That man of renown and honor in [ ] is who ordered him to be murdered after found out that he was not brainwashed and knew everything what he had seen in that place, even his name and what kind of depravation he has.

“In June 1999 they were going to executed him in a secret place in east [ ], in a suburban or SUV with dark windows that no one could see by either side. As they went on the [interstate highway] east toward [ ], after they past [ ], right on the bridge a tornado arose from nowhere and a rush of wind lifted up an eighteen-wheeler from the bed….the double rear-end hit the windshield smashing all the front, killing instantly the two occupants or the executors. Enrique was safe because he was in the back, bounded and handcuffed. The first to stop to see if they could help were Roberto and Jose, the two Colombians, when they heard someone was asking for help inside. They forced the back door and found the boy bounded; they cut the handcuffs and as he told them what those two men were going to do to him, they hurried to get away from that place before the police came. Roberto and Jose were militants of high rank in the FARC before they came to the U.S. They knew the CIA’s tactics; they believed that Enrique was more safe in [ ] than in Costa Rica, at least for the time being.

“Enrique told me all these things on Mother’s Day, 2000 [about three months before Gitano’s arrest] in [the same Swest city]. We spent there the whole day together and when we came back to [ ] I crossed downtown he showed me the building [in downtown …].

September 16, 2012: More information was provided about Jimmy Jones and the [ ] club: “Jimmy Jones finally told me that during three years that he had visited that place with his friend he had mess it up with more than a hundred men there and also his friend, the [official]. Jimmy never met Enrique there, or if he did he couldn’t recognize him because there were almost a hundred kids and they changed every two nights. They only have about twenty every night, but Jimmy never was counted as one of them because he was the lover of one of the richest members….

“At that time in [ ] County was [the official] who was feared by his cruelty. [He had] accused his own wife and son of conspiracy against himself. [His son was sent to prison where he was murdered and his wife received ten years’ probation]. That is the man who fell in love with Enrique and when he discovered that the boy was completely aware of everything he was doing to him— he ordered his death.”

The United States imprisons more than two million men and women in federal prisons and city, county, and state jails. More than 150,000 individuals are incarcerated in each of the states of California and Texas. Calling attention to the flaws in the justice system, The Mysterious Story of Gitano Cervantes tells the stories of five men housed in Swest state units. Author Finbar Manghan, who has served as a volunteer chaplain in the prisons, looks at the cases of the five men who have been prison residents for a combined period of seventy years. Two are white, two are black, and one is Hispanic. Three of them claim to be innocent, while two admit their guilt; the sentences of the latter are such that they will almost certainly die in prison. One is innocent beyond any reasonable doubt. The experiences of all of them have been tragic. The Mysterious Story of Gitano Cervantes addresses a host of issues related to the men’s stories, including false imprisonment, medical mistreatment, misrepresentation of self due to life’s humiliations, mental harassment, medical bungling, and betrayal. Manghan reviews the court and prison experiences of these men and explores the need for reform throughout the criminal justice system in America.

Finbar Manghan earned a doctorate in moral theology and an MBA. He taught at several universities before launching his banking career of more than twenty years. Manghan has written books on management ethics, contemporary biblical studies, and Christian social action. He and his wife have been state prison volunteers for more than eight years.