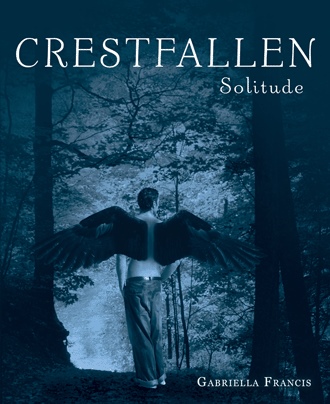 The grinning moon crested above the rippling waters of the calm ocean. The lingering scent of salt filled my nose and the sound of waves lapping against the sand of the shore brought a smile to my face. I always enjoyed staying out late at night, overlooking the serene waters. It put me into a comatose state.

It was the one place where I could just sit, relax, and watch the solitary rippling waves licking the shore, keeping me company.

Strands of my light brown hair fell into my face from the wind, but I brushed them back. I heard the rustling of leaves and tree branches in the shadowy forest beside the shore, swishing as if whispering to the wind.

A strange soaring sound that overruled the slapping waves pulled me out of my exhausted easing sensation.

I felt a puzzled expression rise on my face as I hastily scanned the vast waters, searching for what had aroused me. My attention turned to the sky, where I saw a black winged shadow dart across the light of the moon. Two screaming hawks of metal rocketed after it—Government Fighter-Jets.

Without knowing what I said, I shouted. “What the hell?”

Sparks of light burst from the jets and I interpreted them for what they actually were: Bullets.

The bullets zipped through the air, clearly trying to hit the figure, but the silhouette danced and sliced through the air, dodging the gunshots. Darkness shrouded the night sky, but the moonlight provided just enough decrypting for me to see the details.

The silhouette fluttered through the air in graceful, rapid, almost athletic motions as it dodged the bullets. Through the soaring noise of the Fighter-Jets, I swore I could distinctly hear the constant, yet swift flapping of the silhouette’s black wings.

Then, as if hit by a natural instinct, I rapidly searched my pockets for my IPhone. I had to get this on video. I let out a small grunt of disappointment when I realized I left it at home. Finding nothing else to do, I continued to watch the fight with excitement pulsing through my veins.

The silhouette constantly zoomed through the dark air, as if a part of the atmosphere itself. It then ascended higher into the black heavens, its dark form blending in with the sky and only able to be deciphered by the stars. The jets followed.

The black silhouette vaulted its wings out farther, gaining altitude as it rose and dipped, ascending higher and higher.

I didn’t know exactly what was happening, or the cause of the battle, but whatever it was, it was giving me an adrenaline rush.

The bullets didn’t stop flying out. Before I could digest what happened, the figure began to fall, red liquid flying out in thin lines from one of its wings.

It’s wings tilted upward from the pressure of the fall, as it plummeted at an angle and into the dark forest that detained the shoreline, kicking up tree branches and leaves into the air.

I jerked, bringing a hand to my lips, paralyzed by shock. What happened? It was shot down—was it going to die? What exactly was it?

I watched as the jets hovered a bit before they rocketed away from the scene and out of sight.

Staying where I was, I tried to process what just happened in front of my eyes. Questions circulated my thoughts like leaves in a whirlwind. What did I just see? For a curious person, I despised questions. A fight between a strange winged creature and government fighter-jets was something you’d see in a movie, not exactly real life. If I hadn’t gone crazy and hallucinated, I wanted to see behind the curtains of the show. This couldn’t be over.

Desperate to get the poking and prodding questions off my thoughts, I sauntered towards the dark forest, my pace slow at first, but then I ran in frenzy to see what had fallen. Curiosity killed the cat.

Large pine trees and grey stones loomed and towered above me as I strolled through the dark forestry, relying on memory to take me where I last saw the silhouette fall. The outward stretch of the tree branches blogged out the moonlight, which allowed the darkness to impair my vision.

I focused on the dirt pathway below my feet as my only source of direction. My shoes crunching over the dead leaves gave me a shudder and an unwanted sensation, allowing me to believe that I wasn’t alone.

Owls hooted in the distance, mingling with the howling of a pack of wolves. A heavy fog hung in the air, settling over the forest, darkening the trees overhead. The thick scent of maple wood filled my nose, swirling around my lungs with a sweet aroma but it barely managed to calm my racing pulse.

A black smudge that stood out the most against the light brown pathway caught my attention. I moved closer and plucked it from where it lay.

It was about the size of my forearm and the silk black threads reflected grey against what little light the moon offered.

I looked ahead of where I was, noticing more of them, littered and scattered across the ground. The trail led somewhere off the path and into the skulking darkness that seemed to spiral in front of my vision like a black ribbon, tempting me to go in. I followed the trail of black feathers.

As I led myself into the mass of shadows and imminent large objects, I felt something hard and prickly slap against my arm.

I jolted and whirled around to see what had touched me, with the hairs on the nape of my neck standing on end, I realized it was just a tree branch. Suddenly, I realized that maybe going through the forest—especially alone—wasn’t as good as an idea that I thought it would be.

Still, I was questioning and determined. I wanted to know what animal had been shot down from the skies. The feathers were way too big for any bird that I knew of.

Drops and splatters of red liquid began to fuse with the feathers. The fallen animal had tumbled over the uprooted trees, leaving them painted with blood. Torn tree trunks and bare branches which had their leaves ripped out towered over me like skeletons.

I pushed the branches and brushwood out of my way, and my blood froze when I saw what was lying in the center of the clearing.

His black wings were missing half of the feathers that they seemed to require. The wingspan had to be at least as long as my full sized bed. His arm was bent at a painful angle and the frail, yet muscular body lay sprawled on its stomach, facedown, in a pool of blood. The shadowy trees and bushes formed an uneven circle around his motionless form. He seemed to be unconscious.

If the situation hadn’t been so grave, I would’ve blushed at the fact that he wasn’t wearing anything.

I froze where I stood, unsure if I should run away, or stay longer to get a closer look of what was going on. Ha. Look at that. A real Angel lying right there and here I was, gawking at him with no camera. No proof.

Just like always, curiosity griped control of my actions and I dared a step closer. When the Angel didn’t move, I took another. The Angel’s right arm made a sudden jolt and I froze in my tracks, setting the hazard limits. Danger seemed to roll off him like a heavy scent.

The Angel slowly opened his eyes and the first place he directed them was to the black sky. I broke the limits I had set and stepped closer.

Destiny has always been a curious girl. But this time, curiosity takes a wrong turn in her life, setting her on the path of danger, jeopardy, and dark romance. Destiny has no idea that she’s walking with a blindfold into this one and she’s completely unprepared for the daring adventure set on the path ahead of her. After finding a Dark Angel shot down by government fighter-jets, Destiny begins to feel a strange tugging at her heart for Jared and before she could even decipher what is happening, they are falling for each other.

But it’s not that easy. With unexpected enemies driving them away from home, they are on the run, fleeing from their pursuing penalties. As Destiny and Jared fight the agonizing conflicts to be together, little do they know that a solution with a dangerously powerful, satirical price is lurking within the shadows.

Gabriella Francis began writing her first novel, Solitude, when she was fourteen. After sharing it on Fictionpress, she received positive feedback and decided to officially publish it. Gabriella lives in Miami, Florida, where she enjoys listening to rock music, watching Anime, reading, drawing, and of course, writing.