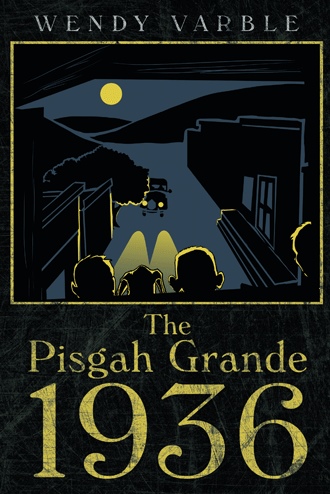 It had been Orville’s idea to spend Halloween night camped out in the Las Llajas Canyon. Johnny agreed to go. He thought it might be fun. Skinny, however, was terrified. “There’s ghosts in that canyon,” he protested. Skinny, at age twelve, was Orville’s younger brother. Orville was thirteen and their friend and neighbor, Johnny Varble, was nearly nine.

“There’s no such thing as ghosts,” Johnny said. He knew this to be a fact, because his father had told him.

Johnny’s father was a farmer. He was a self-educated man, however, and could be found every evening after supper sitting in his favorite chair reading. Orville and Skinny’s father Earl Johnston had a small hardware store in the little town of Santa Susana, in the Simi Valley of Southern California, where both families lived.

On the evening of October 31, 1936, the three boys hiked up the dirt road to the entrance of Las Llajas Canyon. Since it was a Friday night, they didn’t have school the next day. It was still quite hot when they started out; the day had been warm and windy, with strong gusts blowing dirt and tumbleweeds across the small valley. The road quickly turned into a narrow cow trail, and they had to watch closely to avoid stepping into mushy “cow pies.” Truman, Johnny’s father, had allowed him to go, but insisted he take along the family hound dog, Maggie. Two years earlier, in the summer of 1934, Truman, along with two other men, had killed a huge mountain lion near the entrance of the canyon.

The path wound through the lush ravine alongside a shallow stream. The walls were very steep and contained huge boulders—some were the size of cars. The canyon floor, especially along the stream, was lined with enormous oak and sycamore trees. In the small meadows that opened up along the trail they saw Mule deer grazing on the dry grass with a distinctive golden-saffron hue. A red-tailed hawk was circling over-head. Cottontail rabbits froze like little grey stone sculptures as the hikers passed. Their plan was to camp at an abandoned village, the Pisgah Grande, once occupied by a religious cult, but abandoned for more than sixteen years.

Orville had a sleeping bag, which they would all share. The idea was to unzip it and lay it flat on the ground, and each boy had his own blanket. Johnny carried his .22 rifle with him, a gift from his father on his eighth birthday. Mrs. Johnston had given them a paper bag which contained a dozen hot dogs, some apples and several squares of cornbread wrapped in waxed paper. Johnny’s mother, Emma, contributed a bag with oranges and a dozen sugar cookies. There was also a tin cup in the bag to use for drinking water from the stream. In addition to the .22 and the dog, Johnny had his pocket knife, something he was never without, even when he was in school. The knife had been a gift from his father on his fifth birthday. All of the boys in the small farming community had pocket knives.

As the three slowly walked deeper into the canyon they noticed fresh tire tracks. The boys were surprised to see them, but this was not really unusual. The residents of the valley would, on rare occasions, drive up to see the old abandoned village. After traveling about two miles they saw a small brick structure next to a large oak tree. There were dozens of buildings in the small ghost town. A few were of wood-frame construction, but most were of brick.

The boys decided to camp at one of the large brick houses that had a small wooden porch. They would place the sleeping bag on the porch, which was about two feet above the ground, figuring that it would be much less likely for a rattlesnake to crawl onto the sleeping bag with them during the night. After unloading their supplies, they set out to explore the abandoned town.

Some of the brick buildings had at one time been painted or whitewashed and there was a small red schoolhouse with a bell tower on the roof. Several of the masonry structures had partially collapsed, probably during the earthquakes that were prevalent in the area and the ground was littered with bricks. As the campers made their way through the town, looking into each structure they passed, they saw that some of the houses still contained weather-beaten and rotting furniture. Almost all of the windows were broken, and in some places the glass was missing completely. The village was alive with creatures—rabbits, squirrels, lizards, even horned toads seemed to be everywhere.

It was nearly dark when Johnny realized that they had better start to gather wood and kindling for the campfire. All three of them had collected large rocks to place around the fire. They chose a spot on the west side of the house under a sycamore tree that had very little dry grass and no brush. It was October and there had been no rain for over six months—the boys were well aware of the danger of starting a wild fire. During the previous week, there had been a small brush fire in the area and the smoky scent still hung in the air.

It was dark by the time Johnny took a match from the small matchbox he had in the pocket of his jeans and lit the dry leaves and twigs. The flames crackled up and illuminated the trunks of the sycamore trees and the curved branches overhead, casting eerie shadows. A gentle night breeze whispered through the leaves. Orville cut three long, thin oak branches to use as skewers to roast the hot dogs, which they shared with Maggie. After they ate, Orville began to tell ghost stories. They all knew the story of the Pisgah Grande and knew that the cult leader, Dr. Finis E. Yoakum, had died there in 1920. The legend was that his ghost had been protecting the town ever since. Orville embellished this tale immensely and by the time he finished, Skinny, whose nerves were on edge even before the story, whined that he wanted to go home.

By this time it was almost midnight. Orville couldn’t think of another ghost story, so he started to talk about girls. Johnny and Skinny had noticed that lately this seemed to be his favorite topic of conversation. As Orville spoke, Johnny heard Maggie begin to quietly growl. She was lying next to him, with her head resting on his leg when she suddenly lifted her head and, still growling, looked toward the trail leading into the canyon. The two brothers hadn’t noticed the dog and Johnny held up his hand and whispered, “Stop talking.”

Johnny listened, and peered into the darkness. At first he didn’t hear anything and then, very faintly, he could hear the sound of a car motor in the distance. Johnny put his hand on Maggie’s head and said, “Quiet.” She immediately stopped growling, but continued to look down the canyon. All three boys gazed in the same direction as the dog.

He listened and watched—the sound of the motor gradually became louder. Skinny was trembling and Johnny was afraid he might start to cry. Even Orville could hear the motor now and remarked, “Maybe it’s my dad, coming up to get us.”

“No, it isn’t,” Johnny said firmly. He knew the Johnston’s Model A and the sound of its motor. He also knew that it wasn’t his father’s Model T.

The three kids and the dog were very quiet. Johnny could hear that the car was moving very slowly along the bumpy, rutted route. They knew that it was very unlikely that anyone from the valley would be driving up to the old village at that hour. “Put the fire out, now!” Johnny ordered. Skinny and Orville scraped dirt over the campfire with their boots. Even though it was nearly midnight, there was a full moon and they could easily see the stream, about twenty yards away, on the other side of the trail....

In 1936, three boys experience a terrifying encounter while camping in a deserted ghost town, resulting in unexpected consequences echoing far beyond the abandoned walls of Pisgah Grande.

While camping deep in the heart of Las Llajas Canyon on Halloween night, 1936, eight-year-old Johnny and two friends, teenage brothers Orville and Skinny, set out to explore a small, abandoned village in the Santa Susana Mountains called the Pisgah Grande. But as night falls, the boys experience a terrifying encounter in the ghost town that suddenly transforms their exciting adventure into a dark mystery that begs to be solved.

As the days pass, marked by the harsh reality of Depression-era life, Johnny assumes the role of amateur detective as he struggles to unravel the mystery, with or without his friends’ assistance. Skinny is too terrified to help. As usual, Orville is ambivalent. Johnny’s sister is too busy dealing with her own problems. But it is Johnny’s friend, Ernie, seemingly simpleminded and mute, who may be more astute and observant than anyone in their small community ever imagined. As the puzzle slowly comes together, however, Johnny begins to suspect that a missing piece is right under his nose.

In this exciting young adult thriller, a series of events spirals out of control as a boy and his friends unwittingly become entangled in an adult world filled with secrets, confusion, and deceit.

Wendy Varble collected hundreds of stories about Depression-era life during her thirty-five-year marriage to Simi Valley native, Johnny Varble (1928–2011). She is a lifelong resident of Simi Valley and an avid chronicler of its fascinating history. This is her second book.